Over a third and growing quickly. That’s the share of the market that’s now comprised of blind sheep passive indexers.

That much passive money is nothing to sneeze at. Call me old-fashioned, but I was originally led to believe that the function and role of markets in a capitalist society was to direct capital to . . . 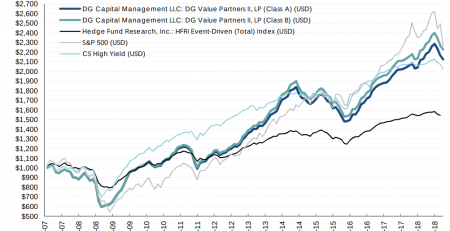 Against the backdrop of volatility, value-focused hedge fund DG Value Partners, outperformed the market in December producing a return of minus 1.87% net. Following this performance, for 2018 as... Read More

Wedbush Securities keeps its Neutral rating for Tesla Motors Inc (NASDAQ:TSLA) with a $110 price target, with the company’s Q2 earnings report due next week, Street Insider reports. The most... Read More

Chesapeake Energy Corporation (CHK) May Rev Up In 2013

Chesapeake Energy Corporation (NYSE:CHK) is one of the most interesting companies in America right now. After years of poor, and sometimes downright malicious, leadership, the firm has turned a... Read More

Apollo Group Inc (NASDAQ:APOL) revealed its earnings numbers for the three months ending September 30, 2013 this afternoon after the market closed. The company showed earnings of 55 cents per... Read More

Ocado Group PLC (LON:OCDO), a shortsellers' favorite in the U.K., has been surrounded by a bunch of conflicting news. The online grocer, a short bet of notable investors like... Read More

Carl Icahn Explains What He Learned from 'Losing It All'

Carl Icahn's interview on Wall Street Week was posted this morning. Below readers can find the full interview as well as a summary of the episode via WSW newsletter. Get... Read More