Macy’s recently announced its first quarter results and they seem to have pleased investors immensely. The giant department chain, had a 38% increase in profits, but its shares fell by almost 4% as its earnings guidance were not well boosted. Net income for Macy’s, Inc. (NYSE:M) increased to $181 million, from $131 million, or increased 30 cents a share to reach 43 cents a share this year.

The increase in performance, was expected as one of its main rivals, J.C. Penney adopted a new pricing strategy that is yet to click with shoppers. Total revenue increased to $6.14, an increase of 4.3% from last years $5.89 billion posting.

AMC Networks Inc (NASDAQ:AMCX) also reported its earnings for the first quarter, and net revenue increased to $326 million, making a 19% increase. Income also increased to $97 million, with the CEO reporting that 2012 had started off well with growth and profits in the double digits.

In a similar good showing, Priceline.com Inc also reported its fourth quarter earnings that have increased by 67 percent from the same period last year. This online travel website showed a strong performance in revenue as well overall bookings.

The showing for the travels firm also reflected an increase in international bookings made, as well as increase night bookings in hotels. This increase in bookings was an increase of more than 62% from the same period last year.

Forecasts for the next year’s first quarter for the travel firm were put at an increase of around 38% from the same period last year, although Priceline did not give its outlook.

The second largest food chain for first foods, Burger King also had a positive showing, although it did not perform as well as expected.

Profits for Burger King were put at $29.4 million, a good showing as opposed to the $93.9 million loss it had last year. Total earning increases to $54.5 million, up from $19.2 million, but these were figures given without the restricting and acquisitions costs. However, its revenues did not do so well after they dropped 0.7%, but sales internationally rose 1.2 percent with Africa, the Middle East, Europe, Latin America, and the Caribbean having a good showing.

Cisco had a good showing, beating expectations from analyst, and assured investors that the restructuring deal it had was paying off big time. Net income from the giant computer firm increased to $2.2 billion, up from the $1.5 billion it posted last year; and revenue increased by 10% to reach $11.5 billion.

Lastly, Kohl’s Corporation (NYSE:KSS) also reported earnings for its first quarter, and had a net income of $154 million, as opposed to $201 million it had last year. However, net sales for the corp. increase by 1.9%. The CEO attributed the lowered profit margins as result of the company’s plan to reduce pricing and offer greater benefits to customers.

The Effects Of Uber's Surge Pricing: A Case Study by Chicago Booth Jonathan Hall, Cory Kendrick, Chris Nosko Uber is a platform that connects riders to independent drivers (“driver-partners”) who are... read more 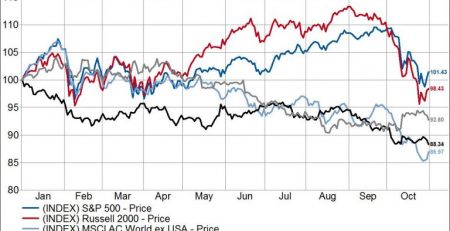 D.A. Davidson’s Timothy Ramey loved Herbalife in 2013, and was very clearly vindicated.  In a recent article, he wonders if it's a good idea to double-down on the company. ... read more

David Neuhauser Up 80% YTD: Glencore Has A Strong Management Team

David Neuhauser, managing director at Livermore Partners, talks about where commodities are heading, with specific comment on Glencore and China. Check out ValueWalk’s exclusive quarterly magazine on under the radar small... read more

The Shiller PE (or CAPE) is a famous valuation metric used to study the S&P 500 (S&P Indices:.INX). However, besides for some small side data on Europe, there was... read more

Robotti on How to Develop A Value Investing Mindset [VIDEO]

Bob Robotti on how to develop and nurture a value investing mindset. read more