Having its beginning in 1913 during the Taft Administration, the home mortgage interest deduction has grown in popularity from an estimated 350,000 taxpayers with taxable income of about $55 million in the first year to about 143 million taxpayers in 2010 with taxable income of about $8 trillion (2010 is the most recent year for which data are available). On the individual income tax side, when statistics are released for the recently completed 2011 tax year, the home mortgage interest deduction will likely have accounted for about 40% of all itemized deductions, or about $520 billion. Because President Obama’s deficit reduction commission (Simpson-Bowles) had the mortgage interest issue on its radar, recent private and congressional studies have focused in on the issue.

Although the focus has generally been on individuals, the idea flows through to corporations, who deduct interest paid before arriving at net taxable income. The idea of corporations deducting interest expenses on an ongoing basis originated in 1918 in an effort to offset the effects of the excess profits tax. In its initial year, about 206,000 corporations had net positive income, with total deductions of about $24 billion on net income of about $8.8 billion. In 2011, the estimated total amount of corporate “interest paid” deduction is about $1.1 trillion (total estimated deductions of about $25 trillion), for an estimated corporate tax savings of about $275 billion.

A bit more elaboration before I delve into the topic.

Corporations take $1.1 trillion in interest deduction, out of a total of an estimated $25 trillion in deductions (the other ones include things like cost of good sold $14 trillion; salaries and wages, little less than $3 trillion; and there are a lot of other deductions to make up the rest, like depreciation, advertising, pension profit sharing plans, other employee benefit programs, etc.). Then if the $1.1 trillion was eliminated, then the direct impact would be about $275 billion in increased corporate income tax revenue. I estimated the number using the most recent IRS’s statistics on income, and I think the margin of error on all the numbers except the $275 isn’t too bad. On the $275, it assumes the effective tax rate jumps up for corporations. It may not end up being $275 because of corporate structure changes, but I it still would be a big number (total corporate collections for 2011 reported by the Treasury was about $200 billion). On the revenue neutral rate, I’m thinking it’s somewhere around 10% (top rate), although the range is very broad depending upon the reactions of corporations.

Meaning corporate “interest paid” deduction is $1.1. The entire amount of corporate tax revenue to the Treasury in 2011 was a little over $200 billion. In this article I was estimating for 2011. Corporate earnings are probably around $28 trillion. I think it is possible that when the 2011 numbers are released, it could be closer to $30 trillion. I think if $30 trillion is the total corporate receipts number, then the deductions should be closer to $26 trillion. To get to only $200 billion in tax revenue to the Treasury from the $3-$4 trillion receipts/deductions difference, I get the difference as credits. I guess I’m more on the conservative end.

Who would be affected by reducing or eliminating the corporate interest deductibility? Well, the list is long. The elimination of corporate interest deductibility would, for sure, cause big changes in the private equity and leveraged buyout industries. By and large, the entire leveraged buyout industry depends in large part on the interest-expense provision. Should the provision be eliminated, there are around 2,000 companies and 25,000 individuals that would be looking for jobs (data on leverage buyout firms are scarce, and there’s problems in separating a leveraged buyout firm versus a private equity firm, so the numbers are best estimates). On the private equity side, an elimination of the tax benefit and the prospect of lower returns would likely lead to a few less deals and less riskier deals overall. In order to keep business from falling off, banks and other investors or advisors to the industry would also need to be clever in adjusting business deals.

When looking at the direct effect according to industry, it’s probably no big surprise who big losers would be:

* Finance & Insurance industry, with an estimated $380 billion in interest deductions (a potential tax increase of around $130 billion);

* Manufacturing industry, with an estimated $240 billion in interest deductions (a potential tax increase of around $36 billion); and

* Management of Companies and Enterprises, with an estimated $230 billion in interest deductions (a potential tax increase of around $70 billion).

Other industries that would be adversely affected, assuming revenue neutrality is ignored for tax increases, include the Information (software, internet companies) industry, the Utilities industry, the Wholesale and Retail trade industry, and the Real Estate industry.

In terms of size, the interest deduction provision is largely focused on the larger industries, with about 92 percent of total interest expense deductions being taken by companies with reported assets greater than $500 million.

This article, of course, doesn’t address the potential benefits of eliminating or limiting the corporate interest deduction, such as lowering the overall corporate tax rate (assuming revenue neutrality) or minimizing the distortions the interest deductibility causes in economic transactions. All in all, the issue is complex, and, because there are certainly some big winners and losers from the potential policy change, the stakes are high.

Good excel sheet going back to 1981 on Corporate revenue.

Booth Laird newsletter for the second quarter ended June 30, 2 016. Last week, British citizens were given an opportunity officially to have their say via a nonbinding referendum on... read more

China Credit Squeeze: Time to worry or listen to Goldman? China analysts are ending 2016 in much the same way as they started it; by warning about the country’s rapidly... read more 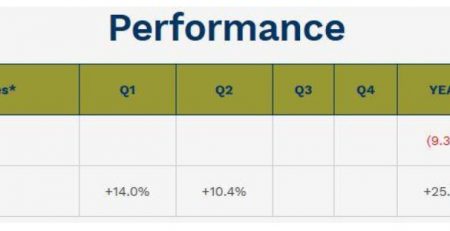 JP Morgan Guide To The Markets For Q4

JP Morgan Guide To The Markets For Q4 - JP Morgan’s quarterly “Guide to the Markets” always contains plenty of interesting information for stock market participants. Released at the... read more