Zynga Inc (NASDAQ:ZNGA), the online social gaming company, took the first step towards real-money online gaming in the US on Thursday.

The company filed an “Application for a Preliminary Finding of Suitability” with the Nevada Gaming Control Board. If successful, it would mean Zynga could operate real-money online games in the state of Nevada, where it is already legal to play real-money games online, so long as the players are inside the state.

It could take up to 18 months for the application to go through in Nevada. Users in the UK, however, already have access to the services – which will be launched in the US if all goes according to plan. Once the initial application has been approved, Zynga Inc (NASDAQ:ZNGA) can then apply for a gaming license in the state – a process that takes a further two to three months.

Zynga’s Chief Revenue Officer, Barry Cottle, said in a statement: “Zynga has filed its Application for a Preliminary Finding of Suitability from the Nevada Gaming Control Board. This filing continues our strategic effort to enter regulated RMG (real-money gaming) markets in a prudent way.”

“As we’ve said previously, the broader U.S. market is an opportunity that’s further out on the horizon based on legislative developments, but we are preparing for a regulated market.”

Online gaming with real money is still a grey area in the US. Last year, the Department of Justice ruled that online gambling is legal under Federal Law, but it is up to each state to pass legislation outlining the relevant operating procedures. Although Nevada and the District of Columbia quickly enacted laws, other states were not so fast on the uptake. Unless the federal government enforces a national policy, it is likely to take some time for each state to pass the law.

The company is currently in a rough patch after its IPO last year. Stock was initially offered at $10 per share, but has since tanked to only $2.50. Furthermore, Zynga’s relationship with Facebook has gone sour, putting considerable pressure on Zynga, which reportedly receives 80 percent of its revenue from the social networking giant. 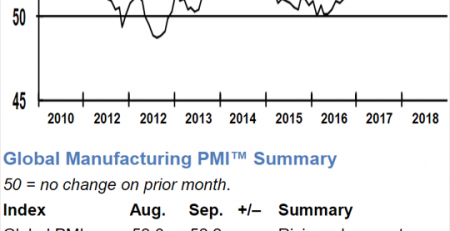 The end of the third quarter saw a slowdown in the rate of expansion of the global manufacturing sector. The J.P.Morgan Global Manufacturing PMI™ – fell to a 22-month... read more

When it takes up to four million pounds of sand to frack a single well, it’s no wonder that demand is outpacing supply and frack sand producers are becoming... read more

Hedge funds delivered their fourth consecutive month of positive returns as global markets ended the year on a strong note of optimism. The Eurekahedge Hedge Fund Index was up 0.99 during... read more