David Zervos, head of global fixed income at Jefferies, told Bloomberg TV’s Erik Schatzker and Sara Eisen on “Market Makers” today that the Federal Reserve’s QE program is “the greatest monetary policy experiment of our lifetime and I do not think that anyone is smart enough, me, any central banker up there” to figure out how to properly exit.

David Zervos said, “I am not criticizing them, I just do not think that we know how to handle this when we need to handle it. We have never done it before and it will be a messy process.”

Video and excerpts from David Zervos interview below

David Zervos on whether investors should still be running with the bulls and whether there’s a point where that approach will run out:

“Yes, there is always an end game and there is always doing too much. We should always be cognizant of the fact that this monetary stimulus…The costs are really the inflationary consequences that come in the future from having printed too much money and not being able to pull that monetary base out of the economy fast enough as people decide they want to start lending again.”

David Zervos on whether investors will lose confidence in the ability of central banks to manage liquidity and drive risk taking:

“It could. It could if people’s inflation expectations become unglued. if you believe that ultimately we are putting too much in and we will not be able to get it out and it will create a big drag for businesses because they will have to manage inflation risks as well as all of their other business risks and that has a negative impact on real growth. But i think we are very far away from that. Look at the data in the last three months on inflation. Everywhere around the globe is that it is coming down, not going up. These guys have bullets and they can fire them. The greatest mistake that people make is talking about QE and all these monetary policies as if people are pushing on a string. We are not. This is powerful stuff.”

David Zervos on whether we’re going to shift to where the cyclicals come out on top because the economy improves:

“I think you have got to get the consumer back for that. the one balance sheet that still is hindering a recovery is the consumer’s balance sheet. The consumer is still funding a large portion of its debt at very high rates. They have not been able to refinance. Maybe our new man Mel Watt who is going to come in and give everyone principal forgiveness–he might be the savior in that case. But my point is that businesses for four years have ranked problems through the NFIB survey and one of the consistently greatest problems is sales. Poor sales. If businesses just saw people coming back and spending I think we would be in much better shape. We have to get house prices up or figure out a way to get people lower funding costs. Those are the big issues. Those are what will drive business sentiment and I think we are still a ways away from that.”

David Zervos on whether investors should tune out macro noise as Warren Buffett said he does over the weekend:

“I think the world did a lot of that before 2008. A lot of people said I did not need macro. They said I don’t need to look at whether GDP is at 4%, 2%, I don’t need to think about the fed or their balance sheets. And I think a lot of people got hurt very badly by not focusing on the macro. Now, Warren has an unbelievable way of doing business that he finds himself quite liquid when other people are not liquid. He has set himself up very well to be — I think he mentioned it in his talk, a lender of last resort type figure in the market, which is a wonderful way to do business. He has been rewarded handsomely for it, but I do not think that he set himself up that way without thinking about some of the macroeconomic costs that could come through. He has seen history repeat itself. We get ahead, we go too far, we get too excited about tech stocks or emerging markets, Mexico. He watches it all go up and says I will be there when it comes crashing down.”

David Zervos on why Lloyd Blankfein is talking about 1994:

“A lot of people have made that comparison and there are a lot of valid comparisons that when the Fed pulls the liquidity away and the economy takes off, it will not be good for bonds. It’s going to be ok for equities. Equities didn’t have a great 1994, but they didn’t sell off a lot. 1995 was an amazing year once the economy got traction. Look, people take carry when you give it to them. They took a lot of carry in 1990-1993. They’ve taken a lot of carry now. People who are over levered in interest rates base are going to suffer when the Fed or the rest of the central banks pull back. But we’re a ways away from that.”

David Zervos on whether he has confidence that the Fed will engineer a fairly orderly exit and we won’t see a snap in interest rates:

“Absolutely not. We have said it before on this show and have written about it for years now. This is the greatest monetary policy experiment of our lifetime and I do not think that anyone is smart enough, me, any central banker up there, I do not claim to be smart enough. I am not criticizing them, I just do not think that we know how to handle this when we need to handle it. We have never done it before and it will be a messy process.”

“I am in the process of writing something about emerging markets and it is the parallels between 1995 to 1998, when the bank of japan saw dollar yen go down to 80 and drove and engineered a very aggressive monetary policy response and took the yen back to 140. Between ’94 and ’98, the Japanese kind of went nuts and it saved them from really rolling over when they already had from the initial crash, but there was a wake of destruction in the process in emerging markets. When the big developed markets central banks decide to play the competitive devaluation game, the emerging markets start flashing red. We’re early days, but emerging markets have not been great performers in the last few quarters and I worry that those who have decided they can pay back a lot of dollars, yen, or euros are going to find themselves with an inability to do so as we see these economies in the developed world take growth back through competitive devaluation from the emerging world.”

Even the anticipation of quantitative easing across the Eurozone is dulling the risk sensibilities of markets, BAML observes Read More 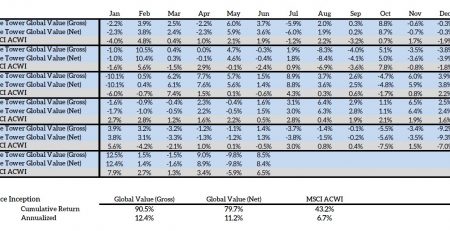