James Dimon has succeeded in his quest to keep both the CEO and Chairman role. What became a media frenzy, we found a bit boring and lame. As we noted, many other large financial companies have a dual CEO/Chairman (see chart below). Putting that aside, for some reason pundits believed if the roles were separated corporate governance would improve at JPMorgan Chase & Co. (NYSE:JPM). This seems unlikely but aside what happens now?

First a summary of JPMorgan vote on James Dimon

Preliminary voting results suggest that Proposal #6 (Separation of CEO and Chairman roles) has been rather convincingly voted down. In fact, the proposal garnered less support at the 2013 meeting than the previous year, indicating more broad-based support for the current scope of the combined CEO/Chairman role.

Given James Dimon’s successful stewardship of JPMorgan Chase & Co. (NYSE:JPM), many believe that fewer disruptions to his role ultimately benefits JPM and its shareholders.

James Dimon will keep both the Chairman and CEO titles, as the proposal to separate the two roles actually received less support than the prior year (32.2% vs. ~40% in 2012), indicating the appetite to create an independent Chairman position was probably lower than recent press reports would have suggested.

Analysts at Sterne Agee believe that JPMorgan Chase & Co. (NYSE:JPM) is an organization with proven management talent that has routinely navigated difficult waters, with impressive success, notably the depths of the financial crisis. The organization has a long-established track record, proven business model and earnings power, as well as the proven ability of management to execute both in good times, as well as times of crisis. Although the prosperity has not been uninterrupted (such has the disclosed CIO losses in 2Q12), management’s stewardship of the company has been exemplary, particularly when compared to similarly situated peers.

Composition of the board remains intact, although several directors get significant “no” votes.

Overall, all nine of the current directors won a plurality of shareholder votes. However, three of the directors saw a significant drop in shareholder support vs. last year’s results. Honeywell International Inc. (NYSE:HON) Chairman and CEO David Cote’s vote dropped to 59.3% (from 97%), Henry Crown and Co. President James Crown dropped to 57.4% (from 97%) and Ellen Futter, President and Trustee of the American Museum of Natural History dropped to 53.1% (from 86%). The remainder of the directors all received in excess of 90% shareholder approval.

Focus on fundamentals an incremental benefit to JPM shares.

Ray Dalio: The Ideological War Of Comparable Powers In A Small World

People need to stop calling the conflict between the U.S. and China a trade war because that term is misleading. It is an ideological war of comparable powers in... Read More

Steve Romick FPA Crescent Fund Q1 letter to shareholders Dear Shareholders: Winners added 1.23% in the quarter and losers detracted 0.41%. Not much can be gleaned from this other than maybe we... Read More 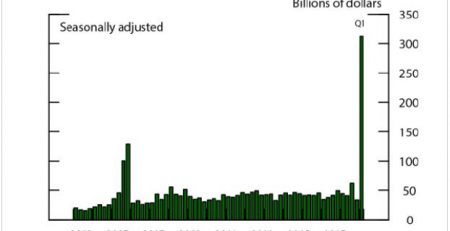 Repatriated Dollar: The Chart Below Explains “What Happened”

Howard Marks does not do many interviews, but lately he has done several. However, this one from Marks is a real special treat. At the Milken Conference, the famous... Read More