While everyone is focused on the U.S. markets' incredible rally, peripheral European markets are under-priced and on the verge of a major rebound, writes Societe Generale analyst Paul Jackson. While most traders are skeptical of France, Jackson thinks that now is the perfect time to invest there, especially because a socialist government has recently been elected.

Now that the U.S. economy is recovering, and appears ready to absorb the effects of tapering, and China has avoided the much-feared hard landing, Europe is in a great . . .

George Soros had a good and bad year in 2013: he won in business but is having a rough go of it in the love department. In 2013 the Quantum... read more

Price To Sales Ratio – Another Nail In The Coffin?

Price To Sales Ratio - Another Nail In The Coffin? by 720 Global 720 Global has repeatedly warned that U.S. equity valuations are historically high and, of equal concern, not... read more

The Chinese Property bubble is only growing and there is little the Government can do, argues one big bank Despite the risks posed to China’s financial system by the country’s... read more

Don’t get your hopes up for driverless cars In the near future, say safety executives at Toyota Motor Corp (ADR) (NYSE:TM) (TYO:7203). Toyota would have collision-prevention technology by 2017 While discussing... read more

The IMF ruffled feathers at the beginning of the month when managing director Christine Lagarde suggested that the Federal Reserve should wait until 2016 for the first policy rate... read more

Facebook Inc (NASDAQ:FB) shares hit a high of $44.61 on Friday's market, this is the new 52-week high price the company's shares have ever sold for, and not the... read more 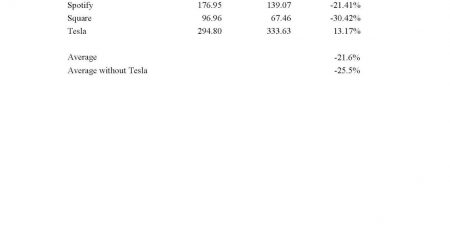 With all the turmoil in the markets, I felt it was time to take a look back at the ten bubble stocks from my post after the close on... read more