General Motors – how bad is it?

We invested in General Motors (GM) in March of 2013 via stocks and TARP Warrants. After a successful 2013, the stock pulled back in early 2014 due to a number of negative headlines, including:

The market was already skittish regarding GM due to a new CEO, Mary Barra, which is usually accompanied by uncertainty until the new CEO is established. These headlines exacerbated those fears

before the first recall was announced. The initial recall and subsequent news has not had much impact on the stock price though it appears to be suppressing the stock price after GM announced an exceptional March sales report.

We are always skeptical of news articles, both those articles that support our thesis and those that contradict it. We understand that fundamental truth – journalists and editors are not interested with facts, just selling papers or garnering page views. We dig deeper to find the truth.

U.S. auto sales were below expectations in January, and every auto manufacturer pointed to weather as the primary cause. The market is skeptical of sales declines truly being due to weather, and rightfully so since many companies point to weather for poor results. However, as many of us know or have heard on the news, January and February of 2014 experienced far more severe and prolonged bad weather than in previous years. Given subsequent improvements in numerous industries’ sales data beginning the second half of February through March, poor weather was a legitimate reason for poor results for once.

After years of growth in an industry, many investors jump on the bandwagon late expecting the growth to continue forever. We have discussed numerous times that the market tends to project the most recent results forever into eternity. In behavorial finance, it is known as recency bias. We normally do not mind because it means that good companies in a struggling industry can suddenly become very cheap. In this case, it meant investors that came late to the party expected more growth and were scared into selling when suddenly confronted with a monthly decline in sales. There was likely also some profit taking spurred by the sales decline in January due to the strong run the stock had experienced over the previous year.

The auto industry analysts love to calculate the equivalent annual industry-wide sales figure based on each month’s sales. For example, if industry-wide sales were 1.26M in January, the analysts extrapolate that to 12 months to get an annual equivalent sales figure of 15.2M. That is what happened after January sales were announced when the market was expecting over 16M in industry-wide sales. How anyone can take a single month’s worth of results, multiply it by 12 without any context or adjustment, and then rely on that extrapolated figure to make investment decisions is beyond my comprehension, but it apparently happens.

Throw elevated dealer inventories into the mix with a decline in monthly sales in January, and you have a recipe for panic. GM’s day’s supply of sales in dealer inventory (a measure of how many days it would take to sell all dealer inventory based on recent sales) spiked to 114 days by February 1st, up from 81 days just a month earlier and an ideal level of 60 days. However, what the article fails to divulge is that the sales figure used is the trailing 3 months sales, making the suppressed January sales material to the calculation and inflating the metric. The article also fails to mention that the following three months are unlikely to resemble the previous three months, especially given how suppressed January was due to

weather. Further, GM stops production going into the holidays and picks it back up in the new year, which helps reduce dealer inventory. GM’s day’s supply of sales in dealer inventory is down to 87 days by the end of March and should continue to decline. I have not found any articles trumpeting this positive news.

If dealer inventories were truly elevated with little hope of coming down in the near future (which is clearly not the case), then the legitimate fear spelled out in a few articles was that we were about to experience a serious price war as manufacturers attempted to get that figure under control while maintaining market share. Indeed, anecdotal evidence of discounts of as much as $7,000 off brand new GM trucks was being reported along with discounts offered by the other auto dealers. Let’s take a step back and consider the true implications to net profits to the auto dealers, which is the only figure that really matters. To know that you would need to know how current pricing levels and cost structure compares to recent years, but that information is not reported in these articles.

A little digging reveals that GM’s pricing on new vehicles is the highest it has ever been in company history while profitability is only improving. Further, reports started coming out that the Big 3 are remaining disciplined in their pricing, reluctant to offer large incentives. The March sales report revealed that GM’s discount as a percentage of average transaction price was 10%, below the industry average of 10.3% and certainly low enough for GM to maintain its improving profitability. These sales figures with limited discounting would also lend credence to the idea that the day’s supply of sales in dealer inventory at the end of January was inflated due to an unusually suppressed January sales amount

Ultimately, all that matters to us is cash flow for the manufacturing segment and net income for the financing segment. In the end, the numbers will win out as they always do. Our assumptions are conservative and GM does not need to do much to surpass those assumptions as the company did in 2013. A couple of bad months due to weather will not impact our valuation.

Turning now to the recall fiasco. It has been interesting to follow as events unfold. It all began with a routine recall, a bit on the high side, of 1.6M vehicles. It would have been buried on page 9 of the business section if that were all. Unfortunately, there was more to the story. It turns out that GM possibly knew about the issues over 10 years ago but opted against a recall even as 13 deaths allegedly linked to the issue occurred. Talk about throwing the brand new CEO directly into the fire.

The new CEO responded by appointing a new safety chief, launching an internal investigation into how this occurred, retaining crisis expert Kenneth Feinberg, publicly apologizing, and initiating some operational measures to facilitate a quick and convenient recall process. With a new safety chief reviewing all current issues known within the company, GM decided to expand the recall and then expand it again. At last count, I believe we are around 7 million cars recalled in 2014. 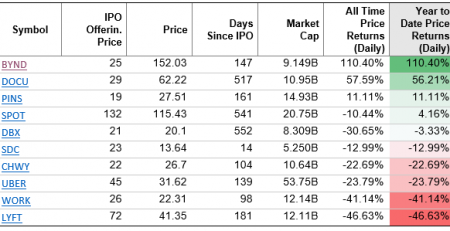 It’s like Lord Voldemort himself is running around the stock exchanges these days sucking Unicorn blood to stay alive. The latest victim is Peloton ($PTON), lovingly known as a... Read More