While smaller hedge funds have performed better than their larger brethren, a new study notes that from January 2009 small funds generated the lowest performance of three fund types studied.

According to a study published in April of 2014 by eVestment’s research division titled “Impact of Size and Age on Hedge Fund Performance: 2003 – 2013,” smaller funds had the highest cumulative return from January 2003 to . . .

As Congressional Republicans are preparing an “extravaganza” of Trump tax cuts, a pair of Bank of America Merrill Lynch economists say that “cutting taxes could be taxing” as they... read more 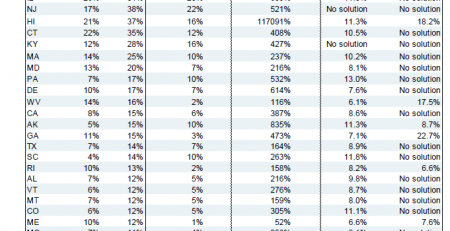 Greatness Comes From What You Don’t Buy: Howard Marks

The ADP jobs number came in at +139K, an acceleration from the 127K of the prior month. On a year over year basis, the ADP jobs figure represents an increase... read more

Some of the largest hedge funds of the industry are stepping into the repo markets, reports Tracy Alloway and Arash Massoudi for Financial Times. Since banks have largely vacated the... read more

Will Net Cash Flows Decline For PE Fund Investors? by Garrett James Black, PitchBook PE Fund Investors Since 2010, there has been a markedly recurrent yearly increase in total distributions to... read more

Continuing on from my last article on the billionaire philanthropist and investor Charlie Munger, here are five more quotes from Warren Buffett's right-hand man that any other investor can... read more

A report out Monday by Macquarie may be comforting to jittery stock market investors blasted by rough market volatility again. The report pointed to a measured pace of economic... read more

I remember when the Dow Jones Industrial Average hit 10,000, both going up and going down. It was a lot more fun going up, especially the first time. The... read more