The headline article in Deutsche Bank Research Haus’s November 2014 issue of Konzept magazine discusses the lessons that can be gleaned from Japan’s difficult economic experiences of the last 30 years, and in particular how these lessons might be applied to the very different economic situations faced today by Germany, China and South Korea.

Authors Stuart Kirk, James Malcolm and Bilal Hafeez take a contrarian position here, as they suggest that it is Germany that should be concerned about an inflationary spiral and China and Korea who need to worry about getting stuck in a post-bubble deflationary cycle similar to Japan over the last decade and change.

Flying in the face of conventional wisdom, the authors suggest a parallel with Japan in that the new monetary loosening and quantitative easing programs being implemented by the ECB could lead to overheating the German economy. They point out that Japan was forced to slash interest rates to rock bottom to reduce its huge trade surplus in the mid-1980s, further stimulating an already hot economy and fueling an asset bubble and crash. Kirk, Malcolm and Hafeez summarize their argument below.

“Of course, there is a real risk of stagnation in Germany, as there is across Europe. Recent data points are soft and getting softer. Even so there is a danger that as loose policy becomes entrenched in order to help weaker members of the eurozone its strongest country eventually overheats. Indeed, there are signs that Germany is warming up already.”

Kirk, Malcolm and Hafeez highlight that China and Japan share many bubble-era parallels. For example, China laid more concrete in a three-year building period 2008-2011 than was used in the U.S. in the entire 20th century. Moreover, since the global financial crisis China has new credit equivalent to the entire U.S. banking system. Much like Japan’s boom years, capital expenditure has been the main driver, contributing almost two-thirds of China’s output growth. China is actually ahead of Japan in terms of investment as a share of national income (around half versus 30% in Japan) and corporate leverage (more than 200% of output versus 100% for Japan). China is in an earlier stage of development than Japan was in the 1980s, but the pace of growth has been mind boggling.

Also of note, China’s economy grew by more than 14% in 2007 and 10% as recently as 2010, but the consensus for next year is just 7%. Before 2012, the last sub-8% growth came in the wake of the Asian financial crisis – and to find a figure less than 7%, you have to look back to the post-Tiananmen days. The authors argue: “Further weakness seems inevitable with China’s property market having cracked and negative wealth effects spilling over to consumers and borrowers. Large real estate overhangs tend to breed prolonged downturns as excess capital stock takes so long to use up.”

The authors argue that South Korea also at risk of slipping into a deflationary cycle as their once-strong export-led economy is currently slumping, and significant downsizing or merger activities are not very likely for cultural reasons. They explain their point of view below.

“South Korea seems prosaic by comparison with China, and merely risks slipping into a Japanesque post-industrial funk. Over the past 50 years South Korea has followed the classic state-led development model under a series of five year plans initiated by the current president’s father, Park Chung-hee.”

How much institutional investors pay in asset management fees continues to be a hot topic, but hard data about the difference between what asset managers say they charge and... read more 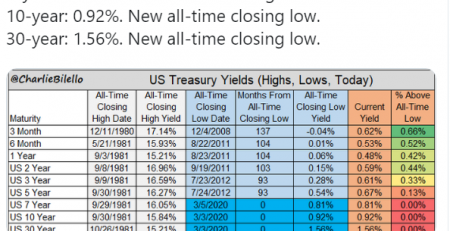 The 10-year US treasury just set a new all-time closing low of 0.92%. And for income-hungry investors, that makes select REIT investments increasingly attractive. For example, consider the big... read more

Moody's Corporation (NYSE:MCO) and Netflix, Inc. (NASDAQ:NFLX) boards are among the thirty-three out of thirty-five,  which approved declassification, according to a report by Lucian Bebchuk and Scott Hirst, of Harvard... read more

This is part three of a four-part interview with Abhay Deshpande of Centerstone Investors. The interview is part of ValueWalk’s Value Fund Interview Series. Throughout this series, we are publishing... read more

Bloomberg reports that billionaire Paul Singer, the hedge fund founder seeking to collect on more than $1.5 billion in judgments over Argentina’s defaulted bonds, has been granted permission by... read more

Donville Kent Asset Management's quarterly update for the period ended September 30, 2015. Dear Partners and Friends, The third quarter was a challenging one, both for our funds and equity markets... read more

On Friday, while ignoring all the negative noise against its patent infringement lawsuit, Yahoo! Inc. (NASDAQ:YHOO) filed two more claims against Facebook. The additional claims include Yahoo's assertion that Facebook Ads... read more