Out Of Many, One? Household Debt, Redistribution And Monetary Policy During The Economic Slump by BIS

University of Chicago Booth School of Business and NBER

The economic performance of advanced economies since 2007 has been dismal. Figure 1 shows real GDP for the Euro area, Japan, the United Kingdom, and the United States against trend growth in the decade prior to 2007. All four economies have deviated dramatically from their previous performance, resulting in a considerable loss of income worldwide. While there have been some recent glimmers of hope, there is little to suggest enough economic strength to return back to trend.

Few economists in 2006 foresaw the stagnant economic performance of advanced economies from 2007 to 2015. Most economic forecasters have consistently expressed too much optimism over the past 6 years. Economists today find themselves on the defensive, which reminds me of what Keynes said in 1930: “if economists could manage to get themselves thought of as humble, competent people, on a level with dentists, that would be splendid!”

And that is how I will approach the lecture today: hopefully I will prove competent enough to offer some insight into what explains our continued economic malaise, but humble enough to avoid causing as much pain as a root canal!

The economic slump presents a number of challenging issues for macroeconomists, and a productive discussion has begun. In this lecture, I want to focus on two of the themes emerging from the broader discussion—themes that I believe are of utmost importance to central bankers. First, there has been an attack on the standard representative agent dynamic-stochastic-general equilibrium model that is the workhorse for monetary policy formulation and analysis.

Christopher Carroll put it least delicately when he wrote: “during the crisis, the dominant class of models, representative agent DSGE models, either had nothing useful to say about the policy questions that needed answers, or provided answers sharply at variance with both common sense and empirical evidence.”

Second, there is consensus building among economists that monetary policy is not as effective as the profession believed prior to the Great Recession. Leading central bankers no longer express confidence that aggressive monetary policy can cure all ills; instead, there is now admission that “monetary policy is not a panacea,” as former Chairman of the Federal Reserve Board of Governors Ben Bernanke said in a speech in 2012. Charles Goodhart of the London School of Economics summed up the sentiment felt by many monetary economists:

“Had you asked, say back in 2005, what would be the effect of a central bank increasing the reserve base of its banking system by a factor of 10 times, most respondents would have predicted massive expansion of bank credit, of the money stock, of nominal gross domestic product and of inflation. Yet none of this has happened …”

The central point of my lecture today is that these two themes are directly linked: monetary policy has been weaker than expected because economists have relied too heavily on representative-agent based modeling to understand how monetary policy works. E pluribus unum—out of many, one—is great for the seal of the United States, but it is insufficient when
modeling monetary policy.

The Cautious Case For Emerging Markets by STA Wealth Management Summary If major central banks really are acting collectively to contain the trade weighted US dollar, then it just may... Read More 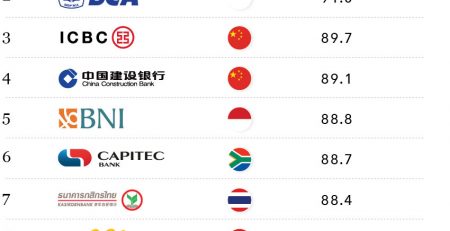 The World’s Most Valuable Bank Brands

When most people think about brands, they often picture iconic consumer marks like Coca-Cola or Apple. Q4 hedge fund letters, conference, scoops etc But in the realm of financial services, the... Read More

Dot Plots At This Point Will Not Predict Interest Rate Increases

While most of the market was focusing on annoying dot plots Wednesday, Jefferies noticed more important moves – dislocations, really -- that to this day have yet to be... Read More