What risks do asset price bubbles pose for the economy? This paper studies bubbles in housing and equity markets in 17 countries over the past 140 years. History shows that not all bubbles are alike. Some have enormous costs for the economy, while others blow over. We demonstrate that what makes some bubbles more dangerous than others is credit. When fueled by credit booms asset price bubbles increase financial crisis risks; upon collapse they tend to be followed by deeper recessions and slower recoveries. Credit-financed house price bubbles have emerged as a particularly dangerous phenomenon.

All of us knew there was a bubble. But a bubble in and of itself doesn’t give you a crisis…. It’s turning out to be bubbles with leverage.

What risk do asset price bubbles present to the economy? Naturally, in the wake of the largest financial crisis since the Great Depression, the causes and consequences of extended mispricing of financial assets have climbed to the top of the agenda for macroeconomists and policymakers. It has become harder to dismiss such bubble episodes as rare aberrations and exclude them from macroeconomic thinking on axiomatic grounds.

In the pre-crisis consensus, to a large extent, policymakers and economists preferred to ignore bubbles, arguing that they couldn’t exist, or couldn’t be detected, or not reliably, or that nothing could or should be done, or there might be unintended consequences, and so on. Researchers and central bankers imagined that the problem of depressions had been solved and that the financial sector would be self-stabilizing. The financial stability role of central banks was mostly regarded as secondary, if not quaintly vestigial. The crisis exploded these and other myths which had taken hold based on very little firm empirical evidence, and with scant regard for the lessons of history. The Former Fed Chairman very publicly resiled from old beliefs: he stepped away from a benign neglect approach to markets’ irrational exuberance, admitted the “flaw” in his worldview, and began to entertain, as above, the possibility that central banks might need to pay heed to bubbles, or at least some of them, rather more seriously than before.

Where are we now? Among policymakers and economists a post-crisis consensus seems to be emerging, and this new view worries a lot about leveraged bubbles. Yet, the skeptic might well ask: Isn’t this new consensus just as detached from evidence-based 0macroeconomics as the last one? Isn’t more empirical work needed before we rush to embrace another approach? Sadly, as of now, if one seeks statistically powerful inference based on data from large samples, then one can find little empirical evidence about varieties of asset price bubbles and the damage they might wreak on the economy.

This paper aims to close this gap by studying the nexus between credit, asset prices, and economic outcomes in advanced economies since 1870. We use a dataset that spans the near universe of advanced economies in the era of modern economic growth and finance capitalism over the last 150 years. Financial crises and asset price boom-busts are relatively rare events. Thus, any empirical study requires very long time series and the experience of more than one country to conduct any reasonable statistical analysis, as our prior work has shown.

Our key result is that some bubbles matter more than others. What makes bubbles dangerous is the role of credit, as was belatedly suspected by Greenspan. This finding also fits with conjectures put forward by Mishkin (2008, 2009) and other policymakers after the crisis: the idea that there are two categories of bubbles. Pure, unleveraged “irrational exuberance” bubbles may pose a limited threat to financial stability or the macroeconomic outlook. “Credit boom bubbles,” on the other hand, may be a dangerous combination. In such bubbles, a positive feedback develops that involves credit growth, asset prices, and increasing leverage. When such credit boom bubbles go bust, in Mishkin’s words, “the resulting deleveraging depresses business and household spending, which weakens economic activity and increases macroeconomic risk in credit markets.” Arguably, these deleveraging pressures have been a key reason for the slow recovery from the financial crisis (Mian and Sufi 2014; Jorda, Schularick, and Taylor 2013).

Although Reserve Bank of India will extend only a token resistance at Rs 64/USD, the central bank is expected to sell $15 billion to defend Rs65/USD levels, notes BofAML. In... read more

Wally Weitz Has Carved Out His Own Niche In The World Of Value Investing By Russell Hubbard, Omaha.com There was a buying frenzy midmonth at Omaha’s Weitz Investment Management, operator... read more

A collection of Forbes articles on Warren Buffett from 1969 to 2005. Get The Full Series in PDF Get the entire 10-part series on Charlie Munger in PDF. Save it to... read more

Body Central Corp. (Nasdaq: BODY) released results for its first quarter, and the profits impressed investors, but amazed most analysts, who had predicted prices per share. Net revenue for the... read more 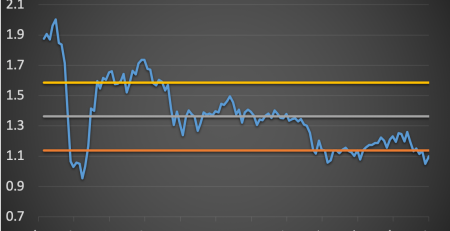