The Elon Musk Book by The Lefsetz Letter

No wonder they all drop out of school.

That’s right, if you’re getting your MBA you’re learning how to get along. Those who change the world do not. They’re one step ahead of everybody else and frustrated that those behind them don’t get it, so they act in mercurial ways and get laughed at…until everybody embraces their creation and lionizes them.

Kind of like the Beatles. They were a joke before they ruled the world. With their long hair and yeah-yeah-yeahs.

My eyes were bugging out as I read Ashlee Vance’s tome. Because Elon Musk is all about changing the world. And we see very little of that in the music business anymore. In the arts, money is king. We laud the box office, not the reviews. Stagnation is rampant. But Elon Musk is going for the big reach.

What kind of guy does this?

One from a completely screwed-up background with something to prove.

That’s right, America’s turned into the land of pussies. Where parents are their kids’ best friends and everything is done in a group, no one wants to stand out. But the truth is those who change the world were never included, were never just like everybody else, they got beaten down again and again until they triumphed.

Sure, Elon Musk’s dad was an asshole. But he was also picked on at school. And you can get your mommy to go to the principal and complain, but the truth is the bullies will always taunt you, because you’re not like them, and everybody wants you to be just like them.

Yesterday the L.A. “Times” ran a front-page story on how Elon’s businesses are the beneficiaries of government money. What’s the point? That’s America. Look at runaway film production, enterprises go where the cash is. But the real story is we pick on the winners, because we just can’t believe they’ve triumphed, we want to bring them down a peg.

So Elon Musk dropped out of a Stanford Ph.D. program, after two days. But he got multiple degrees from Penn, he was educated. That’s another thing wrong with the whiners, those who believe they’re entitled to bucks. They equate paying dues with doing hard work. So, you worked a day job while your band rehearsed at night. Maybe you’d have been better off getting a degree, challenging yourself. But the truth is the hoi polloi don’t want to put in the effort. They need time to watch movies and smoke dope. When the truth is winners have no time, they’re working 24/7, jumping off what they’ve learned at school, which isn’t how to run a business, but THINK!

Elon Musk created Zip2, a directory company in the early days of the internet. Eventually sold to Compaq, he lost control after a while, because those with the money, his investors, wanted a more experienced player, who, of course, screwed it up.

And then came PayPal… Yes, that’s where Elon made his real bucks, but the truth is his vision for the company far exceeded eBay’s, read his explanation in the book, you’ll get it. eBay did not, because eBay was run by managers. It’s creators we revere, who truly establish value.

And then came SpaceX.

Elon Musk: Tesla, SpaceX, And The Quest For A Fantastic Future – Description

Elon Musk: Tesla, SpaceX, and the Quest for a Fantastic Future by Ashlee Vance

In Elon Musk: Tesla, SpaceX, and the Quest for a Fantastic Future, veteran technology journalist Ashlee Vance provides the first inside look into the extraordinary life and times of Silicon Valley’s most audacious entrepreneur. Written with exclusive access to Musk, his family and friends, the book traces the entrepreneur’s journey from a rough upbringing in South Africa to the pinnacle of the global business world. Vance spent more than 30 hours in conversation with Musk and interviewed close to 300 people to tell the tumultuous stories of Musk’s world-changing companies: PayPal, Tesla Motors, SpaceX and SolarCity, and to characterize a man who has renewed American industry and sparked new levels of innovation while making plenty of enemies along the way.

Vance uses Musk’s story to explore one of the pressing questions of our time: can the nation of inventors and creators which led the modern world for a century still compete in an age of fierce global competition? He argues that Musk–one of the most unusual and striking figures in American business history–is a contemporary amalgam of legendary inventors and industrialists like Thomas Edison, Henry Ford, Howard Hughes, and Steve Jobs. More than any other entrepreneur today, Musk has dedicated his energies and his own vast fortune to inventing a future that is as rich and far-reaching as the visionaries of the golden age of science-fiction fantasy.

Elon Musk: Tesla, SpaceX, And The Quest For A Fantastic Future – Review

From the Inside Flap

There are few industrialists in history who could match Elon Musk’s relentless drive and ingenious vision. A modern alloy of Thomas Edison, Henry Ford, Howard Hughes, and Steve Jobs, Musk is the man behind PayPal, Tesla Motors, SpaceX, and SolarCity, each of which has sent shock waves throughout American business and industry. More than any other executive today, Musk has dedicated his energies and his own vast fortune to inventing a future that is as rich and far-reaching as a science fiction fantasy.

In this lively, investigative account, veteran technology journalist Ashlee Vance offers an unprecedented look into the remarkable life and times of Silicon Valley’s most audacious businessman. Written with exclusive access to Musk, his family, and his friends, the book traces his journey from his difficult upbringing in South Africa to his ascent to the pinnacle of the global business world. Vance spent more than fifty hours in conversation with Musk and inter- viewed close to three hundred people to tell the tumultuous stories of Musk’s world-changing companies and to paint a portrait of a complex man who has renewed American industry and sparked new levels of innovation–all while making plenty of enemies along the way.

In 1992, Elon Musk arrived in the United States as a ferociously driven immigrant bent on realizing his wildest dreams. Since then, Musk’s roller-coaster life has brought him grave disappointments alongside massive successes. After being forced out of PayPal, fending off a life-threatening case of malaria, and dealing with the death of his infant son, Musk abandoned Silicon Valley for Los Angeles. He spent the next few years baffling his friends by blowing his entire fortune on rocket ships and electric cars. Cut to 2012, however, and Musk had mounted one of the greatest resurrections in business history: Tesla, SpaceX, and SolarCity had enjoyed unparalleled success, and Musk’s net worth soared to more than $5 billion.

At a time when many American companies are more interested in chasing easy money than in taking bold risks on radical new technology, Musk stands out as the only businessman with enough dynamism and vision to tackle–and even revolutionize–three industries at once. Vance makes the case that Musk’s success heralds a return to the original ambition and invention that made America an economic and intellectual powerhouse. Elon Musk: Tesla, SpaceX, and the Quest for a Fantastic Future is a brilliant, penetrating examination of what Musk’s career means for a technology industry undergoing dramatic change and offers a taste of what could be an incredible century ahead.

From the Back Cover

“Ashlee Vance has given us an intensely reported, wonderfully spirited account of Elon Musk’s rise to the pinnacle of the business world. This is the definitive look at the man who may have the biggest impact on the human race. Should Musk bring humanity to Mars, this will be the planet’s founding document.” — BRAD STONE, author of the bestselling The Everything Store: Jeff Bezos and the Age of Amazon

“Elon Musk is a man after my own heart: a risk taker undaunted by setbacks and ever driven to ensure a bright future for humanity. Ashlee Vance’s stellar biography captures Musk’s remarkable life story and irrepressible spirit.” — RICHARD BRANSON, founder of Virgin Group

“More than any entrepreneur since Steve Jobs, Elon Musk sets the bar for what’s possible in technology. We are fortunate to have our very own real-life Tony Stark in Elon, and here, for the first time, we have his story vividly told.” –MARC ANDREESSEN, venture capitalist and Web pioneer

“Ashlee Vance offers a clear-eyed look at a man who has played the underdog again and again–challenging old thinking and changing the world. I dare anyone to read this book and not be inspired to set their sights a little higher.” –TONY FADELL, creator of the iPod and iPhone, and CEO of Nest Labs

“Elon Musk is one of the greatest entrepreneurial minds of our time. His combination of extreme intelligence, relentless drive, and steadfast belief in his bold ideas is ensuring that all of society has the chance to benefit from his efforts. The book Elon Musk: Tesla, SpaceX, and the Quest for a Fantastic Future is a compelling firsthand, behind-the-scenes look at how Tesla, SpaceX, and SolarCity were formed, and how Elon works to bring his passions to fruition. He is a unique character changing the world, and Ashlee Vance’s book is a riveting account of how Elon’s game-changing ideas have been conceived and born, and now flourish.” –J. CRAIG VENTER, Ph.D., first human genome sequencer and creator of synthetic life

“This thriling book will make you want to start a car company, build spaceships, and go to Mars. The only downside is when you eventually remember that you’re not Elon Musk.” — AARON LEVIE, CEO of Box

ASHLEE VANCE is one of the most prominent writers on technology today. After spending several years reporting on Silicon Valley and technology for the New York Times, Vance went to Bloomberg Businessweek, where he has written dozens of cover and feature stories for the magazine on topics ranging from cyber espionage to DNA sequencing and space exploration.

Elon Musk: Tesla, SpaceX, and the Quest for a Fantastic Future by Ashlee Vance

German finance minister Wolfgang Schauble has warned Greek leaders on a heavily guarded trip to Athens not to play with fire by pressing for fresh debt-relief, and brushed aside... read more

On The Transactions Costs Of Quantitative Easing

Apple Inc. (NASDAQ:AAPL)'s new retail chief, John Browett, is currently under the microscope, following a protracted rumor that has shadowed Apple ever since the outset of this week. The... read more 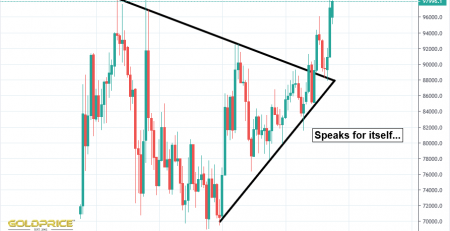 Gold in INR (Indian Rupee)……before long national obsession is going to be back. The amount of interest Indians have in GOLD today can be gauged from the AUM of... read more

Musk's Reading List Reflects His Own Battle 'Against The Gods' via Tom Randall, Bloomberg What kind of book do you read when you’re trying to overturn two of the world’s... read more

Bank of America’s Biggest Mistake Cost $40B So Far [UPDATED]

Back in 2008, Bank of America Corp (NYSE:BAC) made the heroic move of buying the crippled mortgage lender Countrywide Financial Corp. The rescue was made with high hopes, as expressed in... read more