In an interesting approach by activist investor, John Lewis and his firm Osmium Partners, they issued a press release today for Rosetta Stone as the stock sits near an all-time low.

On 5/28/2015 Rosetta Stone received a buyout offer from a private equity firm. The Company never disclosed the price of the buyout offer, but rumors swirled it was for $9-10 a share, when the stock was trading near $8. RDG Capital, run by former Icahn President Russell Glass, was the rumored bidder. In the following week, John Lewis of Osmium put out a press release that he believed a strategic buyer should pay $16 a share, and that the business was operating well on a standalone basis. RDG Capital does not file quarterly 13F’s, so it is unknown if they currently own a stake in RST.

On 6/22/2015, the third activist investor entered the picture, Roumell Asset Management. Combined the three activists own nearly 22% of the stock, while Ariel owns 19%.

On 8/5/2015 Rosetta reported 2nd Quarter Earnings that were substantially improved from prior quarters as they continue to cut costs. Most of the cuts are coming on the heels of hiring turnaround expert Al Angrisani, whom Osmium has worked with in the past on other activist positions. This is not to take anything away from new CEO, John Haas, who has been at the helm for 5 months now. He is a former Managing Director at Goldman Sachs and Co-CEO of Optionhouse Inc.

On 8/17/2015 Osmium issued their second press release in support of Rosetta Stone’s Business Strategy. He lays out a $13-17 take out price based on a sum of the parts analysis. Over the past several years RST has made several acquisitions equating to $73 million in cash used.

The company still sits on $45 million in cash or roughly $2 a share, with $3 million in debt. John Lewis argues these were good acquisitions and the three businesses are worth at least the price paid. This leaves the Enterprise business of Rosetta which they have been transitioning to over the past year doing plus a declining consumer business doing a combined $175 million in revenue. The enterprise business is highly attractive as it produces recurring revenue vs the one time license fees from selling to consumers, but even if you put a conservative 1-1.5x multiple on their combined revenue, John thinks the business is worth $13-17 a share.

Rosetta Stone has spent nearly $1.5 billion in marketing over the past 10 years, yet trades at a market capitalization of $148 million and enterprise value of $105 million. In years past The Company has spent in excess of $20 million on marketing efforts for their international units, generating very little in the way of revenue. RST converted Korea and Japan to licensing agreements and are exploring Brazil and Germany options. This is another step that should help them produce positive EBITDA in the near future.

With so many moving parts here and a large chunk of the stock concentrated in fourmajor holders hands, one would think something would budge here. I have no idea on timing, but as the activists continue to hold their feet to the fire, a catalyst should transpire. The consolidation in the education industry is fairly hot right now and it is a very fragmented industry, could make Rosetta ripe for a take out. I tend to agree the business is worth somewhere greater than $13, but the activists could be saying this because their cost basis is much higher than the current stock price.

Disclosure: This is not a solicitation or recommendation for the stocks mentioned in this article. The writer manages Foundry Value Fund, LP, which does hold a position in the above mentioned security. He has no obligation to update readers on changes and may buy or sell at any time without prior notice.

Columbia MBA- Greenwald Class: Li Lu (2006) Get The Full Henry Singleton Series in PDF Get the entire 4-part series on Henry Singleton in PDF. Save it to your desktop, read... read more

Vikram Pandit just conducted his first interview since resigning from Citigroup, earlier today.  Pandit denied that there was any pressure from shareholders or colleagues to leave the company. No one... read more

Did loans Tilton manage miss payments and was the performance reported consistent with her stated methods? read more 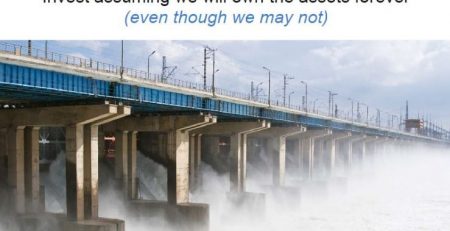 I got my hand on a copy of the presentation Bruce Flatt from Brookfield Asset Management (BAM) did at Google. Here’s the video of the Google Talk presentation. [REITs] Q2 hedge... read more

At today's Ira Sohn Conference in London, some of the world's leading hedge fund managers will lay out their picks for the best and worst stocks in the current... read more