“And in the lonely cool before dawn You hear their engines rolling on But when you get to the porch, they're gone on the wind So Mary, climb in It's a town full of losers, I'm pulling out of here to win” - Bruce Springsteen, Thunder Road

The Grey Owl investment process starts and ends with robust risk management. Our goal with the Grey Owl Opportunity Strategy is to provide equity-like returns, but with lower drawdowns and volatility than the major equity indices. As such, we worry about the downside first. We do not want clients to fear opening their monthly statements, and we certainly do not want to put regular withdrawals at risk, regardless of what the indices are doing. Over the almost nine years we have run the Grey Owl Opportunity Strategy, we have achieved our goals as the table below illustrates.

2015 was a volatile year for risky assets. In the current environment, investor concerns are rising and volatility is picking up with them. To this end, we began positioning accounts more conservatively late in 2015. This meant trimming some positions and selling others, all in an effort to raise cash. This activity continued as we entered the new year, with the goal of preserving capital in the short-term to better position for long term growth. In the letter that follows we describe the indicators we use to assess risk and the macro economic variables we believe are contributing most to a fragile environment. First, here is the performance table for the Grey Owl Opportunity Strategy as of December 31, 20154:

High yield credit sold off in December of 2014, rebounded in January of 2015, and then spent the remainder of 2015 trading lower and lower. The high yield market led other risky asset classes down. When the year was finished, few asset classes and indices were positive. The S&P 500 was barely positive, and only because the largest companies receive larger weightings (it is a “market capitalization weighted index”). Four highflying technology names – the “FANGs” helped quite a bit. For comparison, an equal weighted index of the exact same 500 companies was down 4.1% for the year. Emerging markets and commodities suffered the most. The table below further illustrates the point.

The 21st century began with US equities priced at extraordinarily high valuations. The Shiller PE ratio on January 1, 2000 was 44; today the ratio stands at 23. This compares to an average since 1900 of 17. The S&P 500’s meager returns – just 4.1% annualized, with TWO ~50% drawdowns – since the start of 2000 are largely a function of extended valuations reverting toward the historical mean.

Despite this wild ride, today’s valuation is still high enough to portend another decade of weak returns – Research Affiliates currently forecasts 10-year real returns for the S&P 500 of just 1.1% per year.5

In addition, driven by central banks and profligate governments, global debt levels continue to increase dangerously beyond sustainable levels. Total debt in advanced economies has swelled to 286% of GDP in mid-2014 – up 40% since the end of 2000.

Debt is a drag on real economic growth and has a deflationary pull. US GDP has been growing at a decreasing rate for the past 65 years.

In addition, debt at these levels also introduces the risk of true debt monetization and commensurate inflation. Above all, high debt levels lead and have led to increasingly frequent booms and busts. (See the sixteen year S&P 500 above showing total return of the S&P 500 for the past sixteen years.)

Equities valuations are stretched across numerous measures. Research Affiliates forecasts forward 10-year returns of just 1.1% annualized largely due to assumed mean reversion in valuations. The chart below shows a combination of four reliable valuation measures 69% above their historical average.

The macro-economic and valuation factors discussed above are important anchors, but their influence plays out over long periods. In the short-term, investor risk preference is far more important. Since the current cyclical bull market began in March 2009, investors have been highly risk-tolerant, even during four market corrections of 10% or more. In contrast, numerous signals are now telling us that investors are becoming increasingly risk averse.

What are the signs of increasing risk aversion today? At 1915, the S&P 500 trades below its 200-day moving average of 2022. The yield differential between low investment grade bonds (BAA rating) and the highest investment grade rating (AAA rating) – i.e. “credit spread” – has widened to 143bps from 100bps one year earlier, a clear sign that investors are becoming more risk averse.

Stocks are also deteriorating below the surface of a market that is near its highs.

Historically, the deteriorating breadth that accompanies the formation of a major market top has been signaled by the failure of the market’s Adv-Dec Line to confirm new highs in the major price indexes. In fact, over Lowry’s 88 year history, there have been only three instances, in 1946, 1952 and 1976, when a major market top was not preceded by a divergence between prices and the Adv-Dec Line. During the first few months of 2015, Lowry’s OCO Adv-Dec Line confirmed each successive new bull market high in the S&P 500. That changed, though, in May, when the OCO Adv-Dec Line failed to confirm the May 21st high in the S&P Index. However, the divergence was minor and our report stated a more significant divergence would likely be needed to serve as a warning a major top was forming. And, in fact, just such a divergence occurred at the July 20th high when the S&P 500 virtually matched its May high, while the OCO Adv-Dec Line was significantly below its May peak. At the time, this divergence was noted as further evidence of the deteriorating breadth that typically occurs at the end of a bull market.

All of this calls for an increased focus on risk management. Importantly, it does not argue against owning individual securities with unique catalysts that can perform well despite the overall environment.
With the broadest possible mandate and a world with tens of thousands of securities, there are always attractive investments to own, even in a backdrop as challenging as described above. Properly hedged, we are optimistic about making money across our entire long portfolio, but particularly in the following five ideas with very distinct attributes.

Each of these securities has distinct attributes and risk factors that provide diversification among the five names6, as well as the rest of the Grey Owl Partners long portfolio. AGNC and NLY’s characteristics are particularly tuned to the current environment – the discount to book value offers a large margin of safety, a low-teen yield, and a business model that will do well should the global economy remain weak. Priceline is a growth stock with secular trends strong enough to continue through even weak economic times. Wheeler is a special situation microcap. Leucadia is just too cheap to ignore and management has a history of deal-making that could surprise the market with significant value creation at almost any moment.

Valuations remain high across asset classes and multiple indicators show increasing investor risk aversion. The Grey Owl Opportunity Strategy is conservatively positioned and holds significant cash balances. Our fixed income accounts have little credit risk and the largest position is in long-date US Treasury Bonds. Our partnership vehicle, Grey Owl Partners, has no net equity exposure. (Individual name shorts and market hedges offset sizable long positions, including those discussed above.) Finally, we have modest exposure to gold. All of these strategies are structured as all-weather portfolios tilted toward prevailing conditions.

From our perspective, most investors are still missing the significant paradigm shift that occurred around the turn of the century. Consequently, they remain ill prepared for the low return, high-volatility environment that has prevailed thus far in the 21st century - and which we believe will continue for the foreseeable future. It is hard to overstate how big a deal this is. With valuations high and increased government intervention, the old “buy-and-hold” approach is out of phase with the setting. We are optimistic regarding Agency, Annaly, Priceline, Wheeler, and Leucadia, but our confidence in owning these names is bolstered by our overall focus on capital preservation in the current environment.

As the Boss sang to Mary over forty years ago, sometimes you need to leave behind the conventional and embrace a new paradigm to win.

If you know of an investor who cannot afford to sit in cash, but recognizes the systemic risk in the current global financial system, please ask him or her to give us a call. We believe our approach has the potential to allow investors to earn reasonable and consistent absolute returns while protecting against the time when the “stable disequilibrium” will eventually destabilize. With credit spreads widening, who wants to drive a fast car down a country road at night with no headlights?

The next instalment of our blog series taken from our Don’t Believe the Hype Whitepaper explores the historically secretive nature of the alternatives industry and why the need for reliable... read more

Costco Wholesale Corporation (NASDAQ:COST) has a special holiday gift to its shareholders. The warehouse merchant announced that it would pay a cash dividend of $3 billion, or $7 per... read more 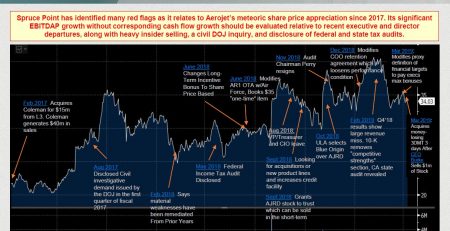 Cindy Whitehead, the CEO of Sprout Pharmaceuticals who oversaw the first prescription drug to enhance women’s sexual drive, is quitting just two months after the company was bought by... read more

On July 6, Asiana Airlines Inc (KRX:020560) (OTCMKTS:ASIC) (Asiana) B777-200ER crash landed at the San Francisco International Airport. Asiana confirmed that there were 291 passengers onboard. The accident is currently under... read more