Walter Schloss, one of the country’s foremost value investors, got his first job on Wall Street in 1934. Occupation: runner. He studied finance under the legendary Benjamin Graham and, following wartime service in the US. Army Signal Corps, joined his mentor’s firm, Graham-Newman. Setting up on his own, he founded Walter J. Schloss Associates in 1955, and he has managed money-his own and his partners-ever since.

JIM GRANT: Ladies and gentlemen, may I interrupt the tart portion, please? So many good things have come to me and to the readers of "Grants" through Paul Isaac and one of them is a fellow that Paul referred to over the years occasionally as Uncle Walter. Little did I know that the gentleman to whom he was referring was and is one of the preeminent practitioners of the craft of value investing of our time or, indeed, of any other. His name is, of course, Walter Schloss.

Walter got his first job on Wall Street in 1934. He decided not to start at the top because it made a better story if he started as a runner. So he began as a runner and he studied finance under the tutelage of none other than Benjamin Graham. On December 8, 1941, not being otherwise occupied, he got in line to enlist in the United States Army. After his separation from the service at the end of the war he went back to finance, joined his mentor's firm, Graham-Newman.

In setting up on his own he undertook to manage money and has done it about as well as it can be done. And today, ladies and gentlemen, he is here with us.

Walter, would you come up here and tell us all about it?

WALTER SCHLOSS: I had a friend who was a therapist at a mental hospital and he asked me if I would talk to his patients about investments. And I said OK, and he introduced me and so I started to talk about investments. And after a few minutes a big fellow in the front of the audience got up and he said, "Shut up, you idiot and sit down!" I looked at my friend and I said, "What do I do?" He said, "Sit down. That's the most intelligent thing that fellow's said in months."

Well, I want to talk about Ben Graham because he was very helpful to me and I think it might be interesting to you to know how he started. Well, we know about his background in Columbia, but he got thejob and became a manager of money because he was very intelligent about his investments and in the '205 he had a deal where he took 50 percent of the profits but he took 50 percent of the losses. And that worked great until 1929 when the market went down and obviously his stocks were affected, too, and he was not only affected by that, but many of these people then pulled out because they needed money for their own purposes or they had lost a lot of money other places.

So he figured out how he could possibly never have this happen to him again. He was very upset about losing money. A lot of us are. So he worked on a number of ways of doing this and one of them was buying companies below working capital and in the '30s there were a lot of companies that developed that way. And then in 1936 he formed a company called Graham-Newman, which was, I'd say, an open and closed end company in that he was able to open it up to his stockholders and he'd sell stock with the rights to buy buy new stock below asset value. That is, if you didn't exercise your option you were able to sell the rights for money.

At the beginning of 1946, I was out of the Army and Graham hired me to work for him as a security analyst and Graham-Newman was then 10 years old and had a nice record. One of the reasons they had a nice record was that they bought these secondary stocks which had big book values but not particularly good earnings. When the war came along he was able to profit from this because the excess profits taxes really hurt the companies with small book values. But the big book value stocks were in the war and so they made a lot of money based upon the fact that they didn’t have to pay these excess profits taxes. And those stocks went up and he did very well. Ben realized that most of them had gone to prices that were no longer cheap and so he sold a great many of them.

So, when I came to work for Ben, he had 37 stocks in his common stock portfolio. This was a really big investment company. They had $4,100,000 of which $1.1 million was in common stocks. I looked at the portfolio and I saw that of their 37 stocks that were in the portfolio on January 31, 1946 only two of them are still around. All the others were taken over, merged, disappeared. And the only two; one was Tricontinental Corp and the other one was McGraw Hill. He had very small amounts of these stocks and you figure $1,100,000 with 37 stocks, it wasn't very much.

Its been a great year for some of the smaller value oriented hedge funds ie Denali Investors, Maglan Capital, among others. Our friends at Arquitos Capital are also having a... read more

While stock benchmarks around the world, such as S&P, Eurostoxx, FTSE and Shanghai Composite, were generally down -3% in January – and the previously high-flying Nikkei down -8% – the... read more

The Financial Accounting Standard Board will propose new rules for insurance accounting on Thursday that seem likely to increase volatility in reported profits for many insurers and lower reported... read more

Blue Tower Asset Management  is off to a slower start in 2017 but had a monster 2016 with an impressive 35% return. Check out our exclusive interview with the... read more

Sources of Value Destruction in Acquisitions by Entrenched Managers Prior work has established that entrenched managers make value-decreasing acquisitions. In this study, we ask how exactly they destroy that value.... read more 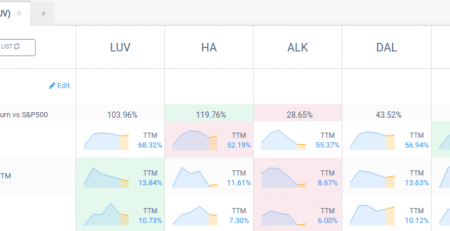 Analyzing stock value traps is a highly qualitative process you need to do before you make an investment. But there are important quantitative things to look at, too, that... read more