Although the Bay Area undeniably holds the crown for the most active startup locale, there are many other vibrant communities throughout the U.S. with founders creating game-changing companies. Cities like Austin, Boston, New York and Seattle immediately come to mind, all fostering growing startups, as well as venture firms to back them.

But how do these cities rank against each other?

A version of this question was recently answered by Fred Wilson of USV. In his post “Second and Third Tier Markets and Beyond,” Wilson separates a handful of notable startup communities into tiers based upon their respective startup activity and startup funding activity. The Bay Area took its expected place at the top of the chain at tier one, followed by NYC, Los Angeles and Boston in tier two, and Seattle, Chicago, Atlanta and Washington, D.C., making up the third tier.

After reading through conversations sparked by this post, we wondered: How do different startup communities stack up on a success/returns multiple basis? Using data from the PitchBook Platform, we calculated return multiples for some of the more prolific startup communities throughout the U.S. and have included our findings below.

Qualifiers for inclusion in the dataset:

Percentage of exits separated by MOIC

Number of exits separated by MOIC

Note: Because we only included companies that have confirmed exit amounts, the data will be skewed positively, as successful exits are more likely to be reported than smaller ones. Companies under 1x return are not included here.

The results are a bit surprising, with cities like Washington, D.C., and Chicago ranking ahead of the Bay Area and NYC. That said, there are many ways to cut the data that may give alternative results.

VC Returns What are other metrics you think can be used to judge the successfulness of a startup community? We’d love to hear your thoughts, so drop us a comment below with any ideas or suggestions and we’ll try and include them in future articles.

At a University of Virginia symposium in late April, Paul Tudor Jones responded to a question about why the panel only featured “rich, white, middle-aged men.” Tudor responded by... read more

As you have probably noticed, stocks are a wee bit more volatile these days. We’ve reached levels of volatility similar to what we experienced during the financial crisis, and before that,... read more

There is currently $1.7 trillion of cash on S&P 500 non-financial balance sheets and, according to a new research note from Bank of America, how corporate’s plan to spend... read more

Analysts at Barclays attracted plenty of criticism at the beginning of February when they published a research note claiming that so-called “animal spirits” were now in control of investors... read more 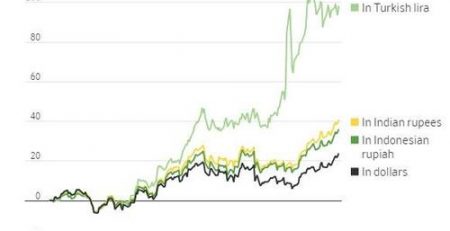 Policy Rate Has No Relevance At This Point, Guidance Is The Key