This is the second of a series on the future of smart beta.

In our first article in this series—“How Can ‘Smart Beta’ Go Horribly Wrong?” 1—we show, using U.S. data, that the relative valuation of a strategy (in comparison with its own historical norms) is correlated with the strategy’s subsequent return at a five-year horizon. The high past performance of many of the increasingly popular factor tilt and so-called smart beta2 strategies came, in large measure, from rising valuations. These excess returns are an “alpha mirage” attributable to the strategies’ becoming more expensive relative to the market. Even the statistical significance of past performance was an illusion driven by rising relative valuation levels! Today, only the value category shows some degree of relative cheapness, precisely because its recent performance has been weak.

Product proliferation in factor investing and “smart beta” create two interconnected risks. First, few if any products will be introduced without having wonderful historical returns. In many cases, these returns are a consequence of rising valuations. Basically, in product creation our industry is data mining on past performance. This selection bias creates an illusion of high past alpha that often disappears when we subtract the effect of rising relative valuations. The alpha mirage creates implausible expectations for investors, who are disappointed when realized returns almost inevitably fall short, and they switch strategies, typically at a substantial cost.

The second risk is far more dangerous: investing when relative valuations are at an extreme—aka performance chasing. Investing in overpriced strategies is value destroying. High past alpha can quickly become negative future alpha. Investors lock in their loss when they move on to the next strategy with wonderful past returns. Just like in selecting stocks, asset classes, managers, and funds, we are exposed to the same perils when we select factors and smart beta strategies. We marvel that these observations are controversial in some circles.

In this article, we present evidence that the relationship between current relative valuation and subsequent performance for both factors and smart beta strategies is robust over horizons shorter than five years and using valuation measures other than price-to-book (P/B) ratio. Furthermore, we unequivocally find statistically significant correlations in out-of-sample international and emerging markets similar to those we find in U.S. markets, although the timing signal has unsurprising uncertainty in any forecast of alpha (it’s pretty noisy). We add two new factors and two new smart beta strategies to our analysis.

The practical implication for investors is simple: valuations matter. They matter in all markets, both U.S. and non-U.S., developed and emerging, and they matter for strategies and factors, every bit as much as they matter when choosing managers, funds, and individual stocks. Valuations matter because they are predictive of future returns. Today, valuations of many of the most popular factors and smart beta strategies are well above historical norms. We have demonstrated that these high valuations are indicative of lower future returns, even if they are not able to provide any prescience on picking peaks or troughs. We do know, however, that valuations are considerably cheaper than historical norms—virtually universally—for the currently unpopular value factor and for the value-tilt smart beta strategies. No performance chasers found here!

To provide context for a discussion and demonstration of the predictive ability of starting valuations to forecast five-year performance, we use the value factor to illustrate one of our major findings from the first article. The information in Figure 1, Panels A and B, will be familiar to those readers. The blue line in Panel A shows the return of the classic Fama–French HML (high minus low) value factor, which compares a capitalization-weighted portfolio of the 30% cheapest stocks (high book-to-price ratio) to a cap-weighted portfolio of the 30% most expensive stocks (low book-to-price ratio).

We can see in Panel A that the ups and downs of the performance of the value portfolio relative to the performance of the growth portfolio (the blue line) and the ups and downs of relative valuation of value relative to growth (the green line) fit like a glove. The rolling 12-month correlation between the two is a lofty 74%. Stop the presses! Whenever value is becoming more expensive relative to growth, it’s outperforming, with few exceptions. Reciprocally, whenever value is underperforming growth, it’s because it is becoming cheaper, with few exceptions.

The performance of the value portfolio relative to that of the growth portfolio starts at 1 in 1967 (left-hand log scale) and ends a bit over 3 in March 2016. The value portfolio over the 49¼ years from 1967 to March 2016 would have generated three times the income of the growth portfolio over the same period for an investor holding the long–short value factor portfolio.3 Surprisingly, this happened in the context of value finishing cheaper than it started a half-century ago. We call this the “wedge,” the manifest spreading of the  difference between the blue relative-performance line and the green relative-valuation line. A large wedge is evidence of structural alpha, not to be confused with the situational alpha of a factor adding value only because it is becoming more expensive!

The green line in Panel A traces a new (as far as we know) phenomenon that has received little or no attention in the academic or practitioner literature: the trajectory of relative valuation, measured by P/B, of the value portfolio relative to the growth portfolio. The green line ranges as low as 0.08 and as high as 0.32 (right-hand log scale), meaning that the P/B ratio of the value portfolio has ranged between 8% and 32% of the P/B ratio of the growth portfolio. Put another way, using the reciprocal of these numbers, growth has commanded anywhere from a lofty 12 times to a mere 3 times the valuation multiple of value. It might seem that a 3-to-1 ratio between the valuation of growth relative to value is a big spread, but it’s not; the spread averages closer to 5 to 1.

Each dot in the scatterplot in Panel B represents a month from January 1967 to March 2011. The horizontal axis measures the relative valuation of value versus growth, ranging as just noted from 0.08 to 0.32. The vertical axis measures the subsequent five-year relative performance of value versus growth (hence the end date of 2011).  Each data point represents a monthly observation of overlapping five-year periods, creating a visual illusion of more observations than we actually have. The dashed line shows the regression fit between the two; a lower starting valuation for value relative to growth strongly correlates with higher subsequent five-year performance.

The solid line in Panel B shows the regression of starting valuation with near-term relative performance of value relative to growth, based on annualizing the subsequent one-month relative performance; the individual plot points are not shown because monthly returns are very noisy. The linkage between starting valuation and subsequent  near-term performance is also strong and fades surprisingly little as we move to a five-year forecasting span. Not wishing to delve too deeply into causality, this would nevertheless seem to be strong evidence for an inefficient market; that is, when value is cheap, its subsequent performance is strong, and when it’s fully priced (i.e., above roughly one-fourth the valuation of growth), the value effect disappears. As contrarians, we appreciate this inefficiency.

Martin Schroeter, Senior Vice President and CFO, IBM How should a profitable corporation allocate its capital? How much should it hold for reinvestment and how much should be returned shareholders?... read more 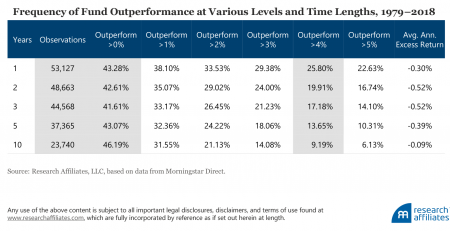 What does a Chinese social media company have in common with a Texas based macro hedge fund? In this case apparently a lot (or at least had? in common).... read more

Lee Kronzon on look for the steak, not the sizzle read more

The Irish Mortgage Holders Organisation (IMRO), an association set up in 2012 to help mortgage holders in arrears, has signed an agreement with Allsops Space, the auctioneers, under which... read more