Warren Buffett remembers the day he met Ajit Jain. It was a Saturday in late 1985 when Jain first walked into the Omaha office of Berkshire Hathaway.

They spent hours talking, the billionaire investor from Nebraska and the unknown from India. By the end of the conversation, Buffett had learned two things: Ajit Jain knew nothing about insurance, and he was exactly the man Buffett wanted to build Berkshire Hathaway’s reinsurance division.

“After talking to him for a couple of hours, I knew that we’d struck gold, and that he would be a great guy to run our reinsurance business,” said Buffett, the chairman and chief executive officer of Berkshire Hathaway.

Jain turned out to be one of Buffett’s best investments.

Over the past three decades, Jain has created a reinsurance business that has generated billions of dollars in float, as well as an underwriting profit, for Berkshire Hathaway. His smart risk-taking and disciplined decision-making have made him invaluable to Buffett’s operations.

“He has made Berkshire Hathaway tens of billions of dollars,” Buffett said. “My partner at Berkshire, [vice chairman] Charlie Munger, and I have told the shareholders if we are in a boat that’s sinking and they can swim and save only one of us, save Ajit Jain.

“He’s hugely important to Berkshire. It’s impossible to overstate that.”

Jain, who is widely considered one of the front-runners to succeed Buffett, has earned a reputation for taking on liabilities that others can’t or won’t. With an enormous balance sheet and a willingness to accept risk for the right price, Jain has orchestrated some of the most notable deals-such as assuming legacy liabilities of Equitas and Brandywine—in the history of the insurance industry.

For years, he was the man insurers turned to when they needed deep pockets to get out of deep problems.

“Whenever the industry has some challenges, Ajit Jain gets involved,” said Rolf Tolle, Lloyd’s first franchise performance director and a member of the board of QBE.

Though he may not be a household name like his boss, within the reinsurance industry Jain is a legend.

“He’s one of the most intelligent leaders in the industry and he commands a sizable wallet,” Robert DeRose, a vice president at A.M. Best, said. “He has a huge balance sheet. He has the ability to do transactions in the industry that no one else can do or can even come close to doing.

“For the large portfolio, legacy liabilities, he really is the go-to person.”

Jain never set out to be an insurance executive. He is an engineer by trade.

Born in Odisha, on the eastern coast of India, he earned a degree in mechanical engineering from the Indian Institute of Technology before joining IBM as a salesman in his home country. When IBM discontinued operations in India, Jain moved to the United States to study business, earning his MBA from Harvard.

He began working for McKinsey & Company. His boss at McKinsey, Michael Goldberg, left to join Berkshire’s insurance division in 1982. A few years later, Goldberg recruited Jain and introduced him to Buffett.

Buffett could sense straight away that Jain was a disciplined risk-taker. It’s the reason Buffett wanted him, despite his lack of insurance background.

Harvard Business School Professor Max Bazerman discuses how important it is to not just to be able to focus, but to be a good noticer as well. Bazerman is... Read More 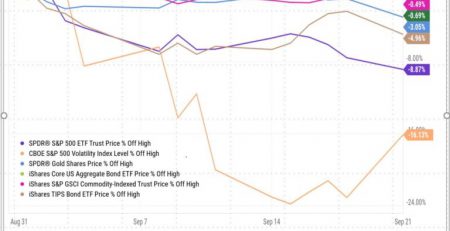 September has been rather nasty (so far) not just in equities, but across the various asset classes purporting to provide diversification from such down turns. After today’s sell off,... Read More