We have known Stamps.com ( STMP )  for many years and have spent considerable time understanding the hot button issues that have surfaced over the last week. We know Capital Forum and Prescience Point and believe both do good work. However, based on what we believe to be misplaced and inaccurate concerns about the sustainability of Stamps’ business model and unit economics, we recently bought a long position in STMP (it remains to be seen whether our long position is a trade or an investment).

Based on our own extensive diligence, we believe the negative arguments are factually incorrect and that USPS reseller relationships are not only stable, but integral to their market share gains. We also believe that one of the most impactful components of the recent short thesis is premised on a USPS Table that appears to have been manipulated to misleadingly add credence to the cannibalization argument.

We of course could be wrong and this is what makes a horserace.

To be clear, the PC postage business is not a simple cottage industry and nuances in the USPS distribution channel have always existed. Resellers and NSA’s are not new (they started in Priority mail). However, industry complexity does not necessarily equate to greater risk, nor does complexity imply illegality. What complexity does is increase the probability that the majority of investors (and sell-side analysts) do not fully understand economic drivers and the entirety of a mosaic. Therein lies the opportunity.

Setting aside the sustainability of the reseller relationships for now, the primary question raised by the Capital Forum and Prescience Point is whether USPS volumes and profits are being cannibalized by Stamps.com and its reseller relationships. While we have no way of knowing what the Postmaster General may propose, the facts seem to suggest that Stamps.com has added tremendous value to the USPS ecosystem (it is worth noting that the PMG already made a series of changes last year to NSA’s and resellers).

First, it is worth clarifying an erroneous representation of Stamps.com and its reseller partnerships. While resellers target shipping volume, they do not print postage. Therefore, reseller customers must either integrate directly with the USPS platform or use a 3rd party technology provider to print postage (there are only a handful & Stamps is by far the largest). As such, it should not be a surprise, but in fact expected, that intuiShip and other resellers offload to the industry’s dominant technology platform, Stamps.com, to print labels.

Second, on the topic of cannibalization, we believe the facts paint a very different picture than what has been presented in recent negative opinion pieces. Based not only on third party feedback, but more importantly on USPS’s own commentary and financial results, it would appear many of the tables and arguments alluding to weak USPS volumes (aka cannibalization) are simply wrong.

Prescience Point makes the argument that USPS mail volumes declined in Q1, citing a table that appears to be extracted from the USPS 10Q. They also conclude that the analysis “definitely proves that Stamps.com 40% organic growth in the quarter was coming entirely from postal monetization that was cannibalizing existing USPS volumes.” 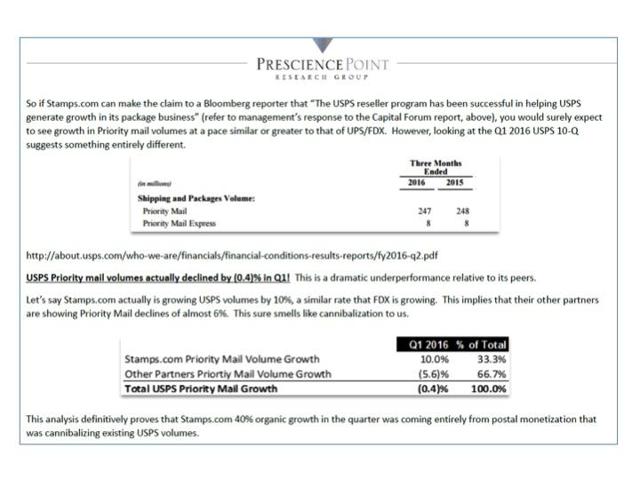 With all due respect, we believe this analysis is not only deeply flawed, but also presented in a less than objective manner. First, the Table displaying shipping and packaging volumes appears to have been manipulated to remove three of the five USPS mail categories. The manipulated table in the report only shows Priority Mail and Priority Mail Express, while cropping out the growth segments. The segments the table does show, Priority Mail and Priority Mail Express, are of course USPS monopolies that are in secular decline and not particularly relevant to resellers and the high volume shipping market that has driven Stamps.com growth and ARPU. Below is the actual Table from the USPS 10Q with a box denoting the segments that were hidden, two of which – Parcel Service and First Class Packages, that have been material drivers of USPS volumes and Stamps.com growth. 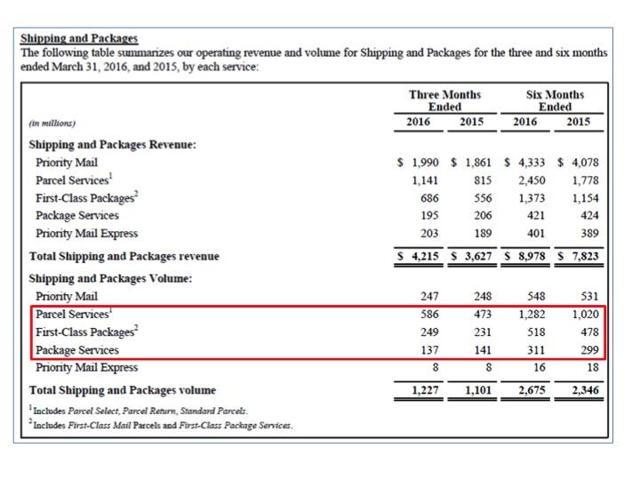 Resellers are focused on the intensely competitive high volume shipper market where DHL, Fedex, and UPS have been so dominant. When the entire picture of the USPS growth is revealed, it is irrefutable that the USPS is not only growing volumes but also revenue. In fact, the USPS could not be more clear of its growth in Stamps.com’s focal segment, specifically highlighting the bulk shipping segment. 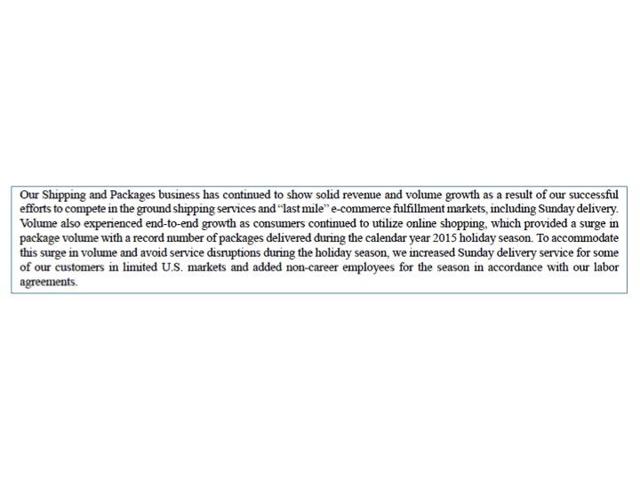 This MD&A does not read negatively or appear to presage some draconian change that would penalize the driver of this performance.

Finally, we would note that Stamps.com’s 40% organic growth disclosure has been questioned extensively by the short selling community. While we confess that it is impossible to corroborate Stamps.com’s 40% organic growth assertion, we would note that the USPS’ reported revenue growth in the Parcel Service channel was none other than…. 40% as well. 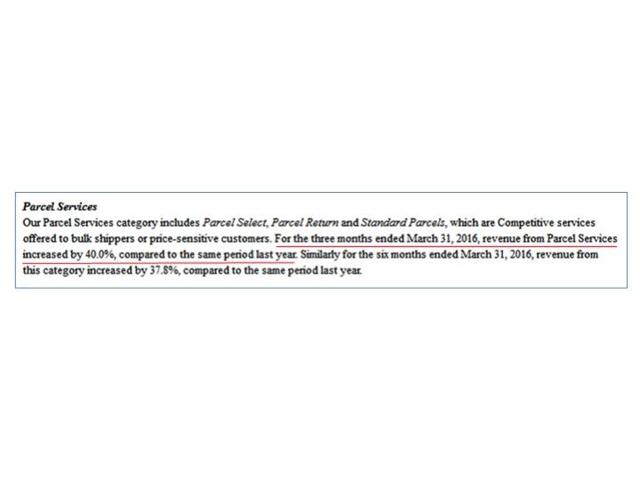 Does this mean the short sellers, who in our opinion generally do better work than long investors, are wrong?

But are the rumors of Stamps.com’s death greatly exaggerated, thus presenting an intriguing investment opportunity in a company with strong secular tailwinds and a dominant technology platform?

In a world where settlements are formed around discovery of natural resources, conventional wisdom dictates that high economic rents – in the form of high commodity prices – would... read more

How investors should think about financial accounting read more

Preqin's latest research into the Asian private equity industry has highlighted the accelerated growth in venture capital investment throughout the region in recent years. After a number of years... read more

I made the trip to Omaha recently to glean investing wisdom from two of the greatest investors of all-time — Warren Buffett   and his second-in-command, Charlie Munger  — but... read more

Here is an excerpt from Bloomberg on the most-cited selections and a list of best books of 2014 picked by Wilbur Ross, Jeffrey Gundlach, Stephen Schwarzman, James Gorman, Howard... read more

On January 31, 1940, Miss Ida Fuller received a check for $22.54. She was the first person to retire under the Old-Age, Survivors, and Disability Insurance (OASDI) scheme, better... read more