On March 20, 2016, we published a comprehensive note – which is available here – that described our reasons for believing that an investment in StoneMor involves substantial investment risk. We updated this view after the Company announced its First Quarter 2016 results and added additional concerns in a report we published on May 16, 2016, which is available here. In a report earlier this week, we covered the changing disclosures regarding contracts the Company has signed over time and the puzzling implications from the changes in those disclosures.

In this report we quickly note that the Company has also changed the way it calculates “Distributable Available Cash” over time. This calls into question – along with the Company’s other disclosure changes – whether the Company has modified its calculations and definitions to enlighten unit holders or obfuscate the numbers.

“Distributable available cash” (“DAC”) is used by the Company and its unit holders as an indication of how much cash is available to distribute to the unit holders at the end of the period. Putting aside, for the moment, that much of what the Company has included in this calculation is neither “cash” nor readily “distributable” because of various State laws, the Company has also seemingly changed the way it calculates this important metric over time.

At the Company’s 2015 Investor and Analyst Day, the Company showed a chart depicting 2014’s year-end distributable available cash as $80 million:

But, by the time of StoneMor’s Investor and Analyst Conference (8 months later), the DAC for 2013 and 2014 had been recalculated. As the slide from the investor deck above depicts, 2014’s DAC was shown as greater than 2013, which was calculated to be just $79 million, nearly $5 million lower than the number shown in the earnings release.

Why did these numbers change? Why should unit holders credit the new numbers in the slide deck and not credit the ones released by the Company in its earnings releases?

We believe the changing metrics and calculations make it very difficult to evaluate the value of the units of the partnership. We are short those units and will benefit if they fall in value.

This is a summary of the investment ideas presented at the 2013 Invest For Kids conference, taking place on October 29th at the Harris Theater in Chicago, started by Ron Levin... read more

Just bought some Global Trans (GLTR.L) – 2.5% portfolio weight (I tweeted about it the other day) this is quite a nice little Russian investment.  They basically operate railway... read more

Shadow banking is a system of financial institutions who conduct business outside the regulatory framework. In other words, it involves those activities that cannot be monitored by regulatory authorities,... read more

High-Yield And Bank Loan Outlook - Summer Headwinds In Leveraged Credit by Guggenheim Partners Risk assets rallied in the latter half of the first quarter of 2016, led by a... read more

Jefferies has banked on a couple of near certainties in a Trump presidency – building of the wall on the border with Mexico, and the building of a protectionist... read more

Canada’s top 1 percent earners currently account for 10.6 percent of the country’s total income, as per the latest study by Statistics Canada. The study narrowed in on the... read more 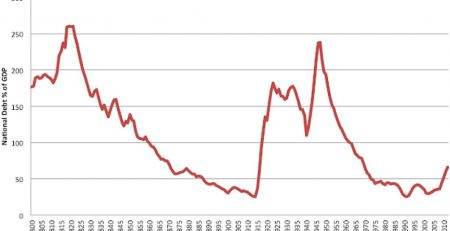 Absolute Return Partners letter for the month of January 2019, titled, "Another Zimbabwe In the Offing?" There are three kinds of people: the haves, the have-nots, and the have-not-paid-for-what-they-haves.” -... read more

When it comes to global value, Ori Eyal’s Emerging Value Capital Management is well-versed in finding the most undervalued shares around the world. Since inception (October 2008) to the... read more