The majority of the second quarter was uneventful. And then Brexit happened. Although the possibility of the UK voting to Leave the EU had been on investors’ minds for months, most everyone was surprised by the final result on June 24th. Markets recoiled, the Pound plummeted, and the currency safe havens of the USD and JPY leapt. It became clear that markets never truly believed the UK would Leave and that the possibility wasn’t adequately priced in. Brexit brings along with it a multitude of financial and political uncertainties and it is unclear at this time what the ultimate global consequences will be. What is clear, yet again, is that attempting to forecast market events can be both filtile and dangerous. At IVA we continue to focus on valuations, worst case scenarios, and their impact on our portfolio. This has helped us minimize drawdowns through many storms, most recently the market’s reaction to Brexit. We believe our portfolio is well positioned as we grapple with post-Brexit unknowns on top of other risks we see, including large credit excesses in China and prolonged Central Bank manipulations. We remain cautious, requiring risk premiums that accurately reflect the current treacherous investment environment.

The Fund’s performance for the quarter was in line with the Index. However, we were able to achieve this with a lot less volatility, specifically during the tumultuous days following Brexit. Our 2 day return from Friday, June 24, 2016 to Monday, June 27, 2016 was -2.93%, compared to the Index which was down -6.85% over the same period. Our gold and cash positions helped us the most over that period. Looking at the quarter as a whole, our equities slightly outperformed the benchmark, up 1.0% compared to 0.9% for the Index*. Our names in Japan contributed the most to performance, up 9.4% and adding 0.7%, compared to the Index’s names which were up 1.0% and contributed 0.1%. South Korea and Bermuda also contributed positively to our performance, adding a total of 0.3%. Continental Europe, the UK and China each detracted -0. 1%.

Our corporate high yield debt was up 10.3% for the quarter, contributing 0.3% to performance. Our total fixed income exposure ended the quarter at 3.7%. Currency hedges detracted -0. 1%, hurt by our hedge on the JPY as it appreciated over the quarter. Our currency hedges remained relatively unchanged, ending the quarter at: 37% Australian dollar, 10% euro, 25% Japanese yen, 31% South Korean won.

Gold was up 7.5% this quarter, contributing 0.4% to performance. Our gold exposure increased from 5.8% to 6.3%. Gold continues to behave this year as we would like it to, “zigging” when the rest of the market is “zagging”. We believe it is an important tool in our long-only portfolio that can help protect against extreme outcomes. Considering the overwhelming number of economic uncertainties and continued ultra-low/ negative interest rates worldwide, we believe that gold remains a necessary hedge in the Fund.

In the immediate aftermath of the UK’s referlendum results, we were able to take advantage of volatility and market dislocations caused by what we believe was an over-reaction to Brexit. We added to existing positions which were hit despite their limited direct exposure to the UK and were able to initiate a few new positions, including names in Japan and the U.S.

Although the volatility following Brexit gave us the opportunity to put some cash to work, we also trimmed and even eliminated names throughout the rest of the quarter as they approached their intrinsic values. Equity exposure increased from 50.7% to 52.6% over the quarter and cash decreased from 39.9% to 37.6%. Our elevated cash position continues to reflect our concerns over, first and foremost, valuations, as well as a disturbing economic outlook.

Charles de Vaulx discussed cash and the difficulty of investing in the current market environment in the June 30, 2016 issue of Value Investor Insight:

“Holding cash today is awful- in real terms you lose money. That leads some people to argue that with interest rates so low, you should use higher multiples to value businesses. Or maybe don’t insist on a 30% discount to intrinsic value, and take 15% instead. We say no to both.

Implicit in lowering your valuation standards is a willingness to accept a lower equity risk premium in the stocks you own. But when we look at the world today, at the market manipulation by central banks, the financial imbalances and excessive debt, the morose economic outlook and the disruption going on in industries that reduces visibility across the board, we’d argue for requiring a higher equity risk premium rather than lower.

Often when the outlook is bleak, valuations are attractive enough to offer a good margin of safety. But that isn’t the case today. We can go anywhere, developed and emerging markets alike, and we’re just struggling to find genuine bargains.”

As we look around the world, the challenges of today’s investment environment become clear:

In Europe, the market as a whole may appear cheap but this is deceiving. The largest parts of the Index (banks, telecoms, insurance companies) for the most part are lower quality and therefore deserve to be cheap. The valuations of companies with better quality businesses, which is our predominant focus, are as high- or higher – than those of comparable companies in the U.S.

In Japan, the market has gone up quite a bit over the past few years, so opportunities are limited. In addition, although corporate governance is improving, the growing debt at the government level is worrisome and there’s still virtually no mergers and acquisitions activity. In our Worldwide Fund, Japan now makes up about 8% of the portfolio, down from 17% five years ago.

In China, the credit excesses are among our biggest global worries. Other emerging markets have come down a lot, albeit a lot more in U.S. dollar terms than in local-currency terms, and the dispersion in valuation among businesses is similar to what we see in Europe.

We believe that the outlook in the U.S. is better. However, if the US. economy slowly progresses while the rest of the world struggles, there are possible negatives for U.S. stocks to bear in mind:

Almost 40% of 5861’ 500 company earnings are generated outside the U.S. If the USD appreciates further with an improving U.S. economy, foreign earnings of those 58(1) 500 companies will be hurt.

If wages go up, historically high corporate profit margins will be threatened. At some point the Fed is likely to raise interest rates.

As Charles said, it is difficult to hold cash today. However, considering today’s challenging investment landscape, we believe our elevated cash position is in the best interest of our clients. It’s important to remember that cash not only provides a buffer in downturns, but that it is also the dry powder we need to buy low when genuine bargains surface. The recent Brexit related turmoil was a reminder of this. Volatility, yet again, proved to be our friend and we remain ready for the next bout – whenever that may be. Until then, we continue to search the world, one name at a time, for well capitalized companies trading at reasonable discounts. We believe this time tested approach to value investing can be a good way to protect and grow our clients’ wealth over time.

Read the full letter below.

Not surprisingly, Equity Long/Short turned out to be the best-performing strategy in Q1 with an average return of 4 percent, as calculated by various hedge fund data sources. Among... read more

Financial crisis such as being witnessed in Greece is unusual for one important reason, new observations from the Pew Research Center show.  Culling data from the International Monetary Fund’s... read more 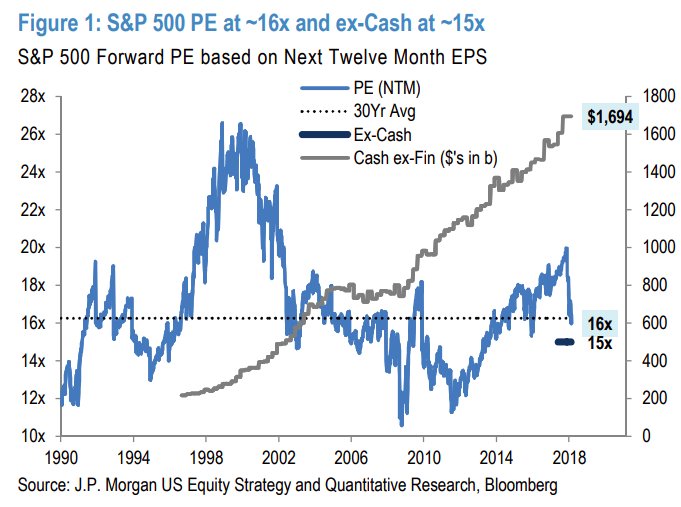 Einhorn says Greenlight Has Lowest Net Exposure This Year, But Looking For Bargains

The October 2014 Eurekahedge Report has been released Hedge funds were up 3.82% year-to-date, registering performance-based gains of US$56.4 billion while witnessing net asset inflows of US$60.7 billion in 2014. Currently,... read more