Fleetwood Corporation – The Numbers Tell The Story by Sandon Capital

Fleetwood Corporation (FWD) recently released its FY16 result. As we expected, the result was poor with the company reporting a loss from continuing operations and a much larger loss when discontinued operations are taken into account. Furthermore, despite the company’s commentary that it “generated very strong operating cash flows”1, our analysis indicates that underlying operating cash flow was negative. The company proclaims that “Our objective is to outperform financially by providing genuine value”2. Continued excuses for poor performance, deflecting from the real issues that need to be addressed and promising improvement that never seems to arise are the antithesis of this objective.

It is clear to us when we analyse the financial statements that little self-help is occurring to reverse the fortunes of the company. The financial performance of loss making businesses continues to deteriorate, in our view working capital management is extremely poor, underlying cash flow is negative and despite commentary to the contrary, it doesn’t appear that meaningful costs are being removed from the business. The sanguine commentary and outlook from the company is sharply at odds with the disappointing financial results. We view this as indicative of a board and management who have yet to accept the reality of the current predicament into which they have steered the company. We believe rapid and meaningful changes in strategy are required to stem further shareholder value erosion.

The increased segment disclosure highlighted the dire performance of the RV Manufacturing business and reinforced our view that losses in this business must be addressed immediately. The company has already been afforded the luxury of 3+ years to turn the business around, and despite ongoing promises of improvement and an end market that continues to grow strongly, the red ink continues to flow. The increased segment disclosure also highlighted that the Parts & Accessories business was barely profitable whilst operating with a tangible asset base of almost $30m. We believe this business may hold more value to an alternative owner.

In our opinion, the company has avoided making difficult decisions in the hope that macro driven improvements in underlying markets will ultimately drive a turnaround in financial performance. A business that relies on the economy to drive its fortunes cedes all control over its existence to exogenous forces and is ultimately doomed to fail. This is most obvious in the RV Manufacturing business where the underlying market has been strong, yet financial performance continues to worsen, with the company continuing to blame the fallout from the global financial crisis for the poor performance of the business. Meanwhile, competitors continue to improve their product offering, advertise aggressively and take market share.

We believe many of the problems outlined above are the result of deficiencies at management and board level. The company has now been without a designated Chief Financial Officer (CFO) since current Managing Director, Brad Denison, was promoted from that position over two years ago. We see the deteriorating working capital position and lack of cost control as being KPI’s of a CFO role. We are concerned that the lack of a CFO is having a detrimental impact on the business and we are also concerned at the lack of ‘checks and balances’ that occur naturally when a designated CFO is in place.

Of further concern is that glaring issues within the company have not been identified and addressed by the board. In our experience, management and boards who have been unable to see value destruction coming are poorly equipped to make judgments for a turnaround. They are typically invested in the way things were rather than the way things are.

The FY16 preliminary final report stated that “operational changes have seen the company…significantly reduce operating costs”. It is incongruous to us that a company can claim to be reducing costs when earnings are declining at the same time revenues are rising.

In FY16, we estimate that Fleetwood Corporation’s EBITDA was down almost 12% despite revenues increasing more than 8%. The adjustment we make in the table below relates to the way the Osprey sale agreement has been structured. Whilst the detail has not been disclosed by the company, it appears to us that the company is forced by accounting standards to record revenues which are then offset at the finance cost line. We have no problems with this accounting treatment as the net impact on earnings and cash flow is nil. However, it does serve to inflate EBITDA and an appropriate adjustment needs to be made. We have estimated this impact at $2.5m and reduced EBITDA by the same amount in the table below.

The numbers above, taken directly from the financial statements, demonstrate that costs increased in FY16, not reduced as per the company’s commentary in its Preliminary Final Report. Reported costs were up by almost 9% in FY16, led by significant increases in material, sub-contractor and other costs which were only partially offset by small reductions in employee and operating lease costs.

We believe many of the problems outlined above – poor working capital management and lack of cost control leading to very weak cash flow – are the result of deficiencies at management and board level. The company has now been without a designated Chief Financial Officer (CFO) since current Managing Director (MD), Brad Dennison, was promoted from that position well over two years ago. We see the deteriorating working capital position and lack of cost control as having a detrimental impact on the business. We are also concerned at the lack of ‘checks and balances’ that occur naturally when the MD/CEO and CFO roles are separated.

Of further concern is that glaring issues within the company have not been identified and addressed by the board. In our view, the board has paid lip service to shareholders and made cosmetic changes to its composition. We would like to see at least one new board member added that has demonstrated experience in identifying and addressing problems in underperforming public companies and ultimately turning them around.

For the first time, the company separately reported the performance of its RV Manufacturing division. The increased disclosure highlighted a business with serious problems, with the FY16 loss of $8.1m a deterioration from the $7.6m loss reported the previous year. Despite the poor financial performance, the company continued to invest in the business, increasing the asset base and book value. We question the logic of doing so given the deteriorating performance of this business over the last 3-4 years.

When commenting on the outlook for the RV Manufacturing business in the FY16 Preliminary Final Report, the company stated that there are “very encouraging” signs and “the board has confidence in the direction the business is taking”.

Taken in isolation, this comment provides an expectation for improved performance. Unfortunately, the upbeat outlook commentary over the past few years has been sharply at odds with the subsequent performance of the business. In the FY15 Annual Report, the company stated:

“While a number of initiatives were implemented to address performance issues in caravan manufacturing during 2015, these are yet to manifest in improved profitability…A number of key senior management changes have recently been made in the recreational vehicles division. The changes are aimed at ensuring successful implementation of initiatives to address performance concerns.”

On the FY14 earnings call, Managing Director, Brad Dennison, was also upbeat on the future direction of the business:

“We are bringing some exciting new products to the market for the upcoming show season at what will be extremely competitive price points. And we’ve got some fairly aggressive plans to further expand the dealer network. So, as we do that, we’re expecting that, that business will gain some pretty good momentum.”

And as far back as the FY13 Annual Report, the company was pointing to an imminent recovery:

“Fleetwood RV (the combined Coromal and Windsor) repositioned Coromal as a quality/volume brand and Windsor as a premium brand. Designs, product range and dealer networks were rationalised. A range of lower specification and price point caravans was developed and released alongside an Asian sourced camper, which has strengthened the order book and increased production.”

Given the company’s track record of consistently underestimating the task at hand and the failure to deliver a turnaround despite years of promises, we believe shareholders should take the company’s assurance of a turnaround with a healthy degree of scepticism. Despite an end market growing at 5%+, financial performance has continued to deteriorate and the losses must be addressed immediately. We have little confidence that the current board and management have the capacity to make the correct decision on the future direction of the business.

6. Capital Expenditure Minimised and Should be for Many Years

For only the second year since FY01, capital expenditure was below the level of depreciation and amortisation. We would expect this to be the case for the foreseeable future given the significant investment in the asset base the company has undertaken over the past 15 years. Since the end of FY01, the company has outlaid A$377m on capital expenditure, well above depreciation and amortisation (D&A) of $A162m over the same period.

We encourage companies to re-invest in their business to grow, provided they are earning an adequate return on the incremental capital that is deployed. Unfortunately the opposite has been the case at Fleetwood over the past four years. The company has continued to plough capital into its asset base whilst returns have been falling precipitously. We do question the capital allocation capabilities of a board and management that sees this a sensible way of managing the company’s precious capital.

Whilst the company has commented that ‘the directors intend to resume the payment of dividends as soon as practicable’, we question whether a meaningful dividend can, or indeed should, be resumed any time soon. After the $28m loss that was reported this year, the company does not have any retained earnings from which to pay dividends. Note 33 of the Annual Report also highlights that the company does not have any profit reserves or retained earnings at the parent entity level with which to pay dividends.

Therefore, the only way the company can pay dividends is out of net profits generated during the period, and with a weak outlook for at least the first half of FY17, we expect any dividends declared to be very modest. At current share prices and with a solid balance sheet, we think the board should consider a buyback as an effective way of improving per share value and returning capital to shareholders.

Forget about dodging the cold winters in New York, hedge fund manager John Paulson is looking at Puerto Rico as his new home to leave capital gains taxes behind. In... Read More 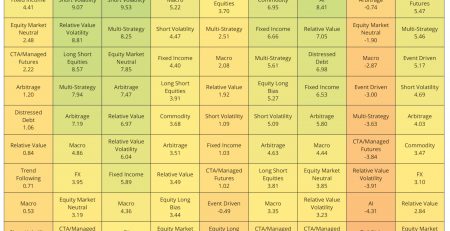 The Eurekahedge Hedge Fund Index was down 0.32%1 in September, in spite of the recovery exhibited by the global equity market as represented by the MSCI ACWI (Local), which... Read More

A News-Utility Theory for Inattention and Delegation in Portfolio Choice Michaela Pagel** Columbia Graduate School of Business Abstract Recent evidence suggests that investors either are inattentive to their portfolios or undertake puzzling rebalancing... Read More