Apple’s development teams are on a tear. Soon after releasing iOS 10.1.1 to the public, Apple has released iOS 10.2 beta 1 for developers. Additional betas are expected in the coming days as the company crafts the next update for its operating system that powers the iPhone, iPad and iPod touch.

For those who don’t have a developer account, which costs $99, YouTube user iCrackUriDevice has a workaround on how to install the latest beta version.

Mergers and acquisitions are often seen as risky, since mature businesses with cash on hand may be looking for growth without considering whether M&A activity actually produces returns above... read more

It had to come to this. The most self-indulgent and self-promoting of all societal trends, the “selfie,” has now led to death and destruction. This time however, the death... read more

What Is Troubling The Biotech Industry?

What Is Troubling The Biotech Industry? by Isaac Sprecher The past several months have been especially difficult for the biotech industry. In mid-July Celgene purchased Receptos for ~8 billion dollars and... read more

You’ve no doubt heard the news by now, Jana Partners has made a big bet on Qualcomm. Reportedly, owning over $2 billion in stock, which is still less 2%... read more

Deutsche Bank's annual Long-Term Asset Return Study was originally put together by the bank to explore the notion that developed world asset classes traditionally exhibit a rhythm of returns through time that are... read more

There Might Be Dragons (The Fear Of Internationalization) by Jeff Thomas, Sprott Money In the early sixteenth century, the Hunt-Lenox globe was drawn, showing uncharted (and presumably dangerous) areas, marked... read more

The big news on today's market will be the release of the new iPhone, expected at a Cupertino event starting at 1 pm EST this afternoon. In anticipation of... read more

American Express Company (NYSE:AXP) is due to release earnings for the third quarter of 2013 on Wednesday October 6 after the market closes. The company is the first of... read more 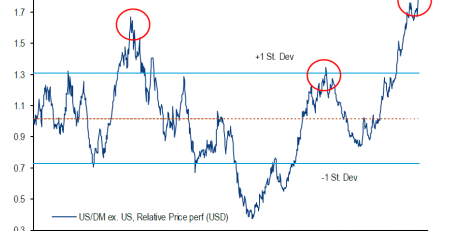 Although December was undeniably a painful month for equities, it's almost like the steep correction never happened. The S&P 500 hasn't yet reached the level it was at before... read more