David Einhorn is an American investor, hedge fund manager, and philanthropist. He is the founder and president of Greenlight Capital, a “long-short value-oriented hedge fund.” Born in New Jersey, Einhorn graduated from Cornell University in 1991 and moved to Westchester, New York to start his fund. He started his fund in 1996 with $900,000 and has generated 16.5% annualized return for investors from 1996 to 2016. As of 2017, Greenlight Capital has US$9.27 billion in assets under management.

He has received extensive coverage in the financial press for his fund's performance, his investing strategy and his positions. Einhorn was ranked 44th in the Time 100 most influential list of people in the world in 2013. According to Forbes Magazine, Einhorn has a net worth of US$1.54 billion (as of February 2017), making him the 44th youngest billionaire on the Forbes 400 and the 18th highest-earning hedge fund manager in the world.

ABOUT THE OXFORD UNION SOCIETY: The Oxford Union is the world's most prestigious debating society, with an unparalleled reputation for bringing international guests and speakers to Oxford. Since 1823, the Union has been promoting debate and discussion not just in Oxford University, but across the globe.

The Securities and Exchange Commission (SEC) has voted to give Oppenheimer & Company a break from further enforcement action after a “bad actor” ban was triggered and then subsequently... read more

We are living in a twilight zone where the US dollar rises sharply with commodities, normally negatively correlated. CLSA’s Fear and Greed’s Christopher Wood thinks we have reached an... read more

JPMorgan’s quant master Marco Kolanovic looks at the stock Brexit crash and rebound and sees similarities with the August 2015 version. In a June 30 report emailed to clients... read more 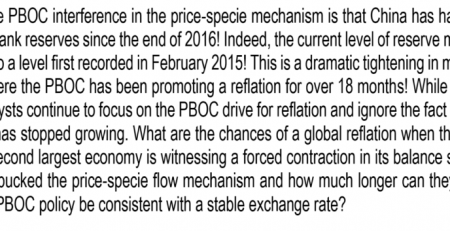 Russell is my all time favourite strategist and this article https://www.eri-c.com/news/303 on the dilemma facing the People Bank of China is a must read. Q3 2019 hedge fund letters, conferences... read more

The credit-to-deposit ratio in China's Banking System witnessed a sharp rise by 27 ppts since 2011 to stay at the elevated level of 116% as of February, which is... read more

A recent look at the ETFs with more than $1 billion if inflows this year revealed that many investors are still chasing momentum instead of looking for value. For... read more