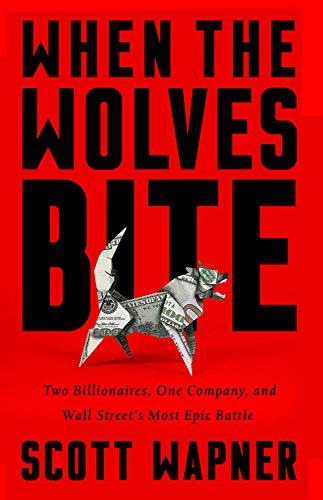 CNBC @HalftimeReport looked back at the epic brawl between hedge fund managers Icahn and Ackman which happened five years ago today. There also is a new book on the topic by Scott Wapner of CNBC  called When the Wolves Bite

This was one of the most heated exchanges on CNBC

This was one of the most heated exchanges on CNBC from CNBC.

CNBC's Leslie Picker reports on how hedge fund managers Carl Icahn and Bill Ackman have done in the past five years since their brawl over Herbalife.

Recounting the feud between Carl Icahn and Bill Ackman

Recounting the feud between Carl Icahn and Bill Ackman from CNBC.

When the Wolves Bite - details

When the Wolves Bite: Two Billionaires, One Company, and an Epic Wall Street Battle by Scott Wapner

The inside story of the clash of two of Wall Street's biggest, richest, toughest, most aggressive players--Carl Icahn and Bill Ackman--and Herbalife, the company caught in the middle

With their billions of dollars and their business savvy, activist investors Carl Icahn and Bill Ackman have the ability to move markets with the flick of a wrist. But what happens when they run into the one thing in business they can't control: each other?

This fast-paced book tells the story of the clash of these two titans over Herbalife, a nutritional supplement company whose business model Ackman questioned. Icahn decided to vouch for them, and the dispute became a years-long feud, complete with secret backroom deals, public accusations, billions of dollars in stock trades, and one dramatic insult war on live television. Wapner, who hosted that memorable TV show, has gained unprecedented access to all the players and unravels this remarkable war of egos, showing the extreme measures the participants were willing to take.

When the Wolves Bite is both a rollicking business story and a cautionary tale about the power that lives in the hands of a precious few.

Scott Wapner is the host of Fast Money: Halftime Report, which airs every weekday on CNBC. Wapner has also reported several documentaries for the network, including Ultimate Fighting: From Blood Sport to Big Time, which earned him an Emmy nomination, and One Nation, Overweight, for which he received an award from the Society of American Business Editors and Writers as well as a Sigma Delta Chi Award from the Society of Professional Journalists. Known industry-wide as an expert in the area of activism and markets, Wapner has reported live from the floor of the New York Stock Exchange and is in regular contact with all the personalities in this book. He lives in New Jersey.

Stock Market: Focus on Time Not Timing by ColumbiaManagement 30 years equals about 11,000 days. One might assume that eliminating a few of those days would have little impact on... Read More

M&A Activity Set To Pick Up With Rising Rates

The current M&A cycle might have come to an end if transaction volumes are anything to go by, that's according to a new report from analysts at Morgan Stanley. According... Read More