Whitney Tilson is back…. below is his latest email to investors

An interesting discussion I had with two friends on Facebook about Trump’s impact on the economy:

David writes: This economy’s retail sales are the strongest they've ever been in ten years. These are the real numbers of every retailer in the USA summarized by my firm. It’s a fact. Sales were up 7.3% in Q3, up from a 4-5% run rate under Obama, which itself was pretty good. This recent acceleration is a result of consumer confidence and the President is clearly responsible for that optimism. Obama did a good job too.

These tax cuts will most definitely heat things up more. They come at a bad time when the economy is at its greatest strength. This timing is however a function of politics as it can be achieved now and maybe not later. The big risks are inflation and higher interest rates which as I see it are the only things that can slow things down.

Both are right. This will stimulate the economy but it will also most likely increase deficits. Lower taxes always come with the theory that taxes overall go up due to the increased expansion, but inevitably deficits just go up.

Remember, there ain’t no such thing as a free lunch.

Watching from afar, I am amazed how people who hate Trump just get so upset that the economy is so strong now and simply cannot give him credit, taxes aside.

They lose any credibility when they act in this emotional way, and because we know that if the economy was bad a year after taking office, the President would be pounded.

Give credit where it is due even if everything else bothers you...

... As I said however, I do believe this is likely to be a fiasco down the road, but in the near term it is terrific. These are facts I share about the current state. And a tax cut certainly ain’t great. As for those affluent in NY and California as examples, this tax plan is not good. The riddance of the state tax deduction raises taxes.

Jerry comments: While it’s true retail sales have surged, the economic data is still not really any better than any other period, with job growth actually slower than the year before and GDP growth still weaker than the 2013/14 period. Where I do agree is that optimism is high because people believe that Trump will get things done, my concern is more that people generally don’t know anything, and get excited at the top.

My comment: What David writes is true: the economy overall, and consumer spending in particular, are very strong - and that's most likely due to Trump inheriting a strong economy and pouring gasoline on it. The question is, at what long-term cost? I also agree with David that this "is likely to be a fiasco down the road".

There's a reason Trump has gone bankrupt so many times: he has no ability to think beyond the immediate moment and thus is the ultimate boom-and-bust kind of guy.

2) Building on what I posted yesterday from my friend David, it's important to acknowledge that the U.S. economy is strong and may even be accelerating - and part of that is no doubt due not only to the actions but also the rhetoric of the Trump administration. The key question is: at what long-term cost, in terms of a polluted environment, businesses run amok, an overheated economy, etc.? The Trump Effect: Business, Anticipating Less Regulation, Loosens Purse Strings, https://nyti.ms/2DJjRvx. Excerpt:

A wave of optimism has swept over American business leaders, and it is beginning to translate into the sort of investment in new plants, equipment and factory upgrades that bolsters economic growth, spurs job creation — and may finally raise wages significantly.

While business leaders are eager for the tax cuts that take effect this year, the newfound confidence was initially inspired by the Trump administration’s regulatory pullback, not so much because deregulation is saving companies money but because the administration has instilled a faith in business executives that new regulations are not coming.

3) An African-American friend’s comments on this:

I think the missing piece in the analysis is the euphoria of old white men being back in charge on the psyche of certain folks in what I believe is a racially charged society. Look at the victory photos of the Republican Congress. Sessions is quietly putting the laws back in place and lawmakers back on the bench who will ensure any perceived new rights for the least of these in our society are curtailed. The worry of having an African American in charge is past, and "happy days" are here again. The Confederate resurgence is a good example of that, its growth, breadth, and the mainstreaming of them; notice that it's not all skinheads anymore, and look how little concern there was about the woman being killed in Charlottesville.

Never underestimate the power of racism in America to gin things up or slow them down.  I can't prove it, but I can feel it.

4) Krugman’s take: Can the Economy Keep Calm and Carry On?, https://nyti.ms/2DKwsP3. Excerpt:

So we’re living in an era of political turmoil and economic calm. Can it last?

My answer is that it probably can’t, because the return to normalcy is fragile. Sooner or later, something will go wrong, and we’re very poorly placed to respond when it does. But I can’t tell you what that something will be, or when it will happen.

The key point is that while the major advanced economies are currently doing more or less OK, they’re doing so thanks to very low interest rates by historical standards. That’s not a critique of central bankers. All indications are that for whatever reason — probably low population growth and weak productivity performance — our economies need those low, low rates to achieve anything like full employment. And this in turn means that it would be a terrible, recession-creating mistake to “normalize” rates by raising them to historical levels.

But given that rates are already so low when things are pretty good, it will be hard for central bankers to mount an effective response if and when something not so good happens. What if something goes wrong in China, or a second Iranian revolution disrupts oil supplies, or it turns out that tech stocks really are in a 1999ish bubble? Or what if Bitcoin actually starts to have some systemic importance before everyone realizes it’s nonsense?

I’m not predicting any of these things, and when the next big shock comes it will probably come from some direction I haven’t thought of. But when it does come, we’ll need an effective, coherent response from officials beyond the world of central banking.

So imagine such an event happening soon. How confident would you feel in the team of Donald Trump and Steve Mnuchin? How much leadership could a weakened Angela Merkel exert in a fragmented Europe?

You might have thought that such concerns would weigh on markets even now. But for whatever reason, investors are currently in what-me-worry mode. And let’s hope that they’re right — that by the time stuff happens, we’ll actually have non-delusional people in charge.

5) I was 100% right that the first year of the Trump presidency would be a chaotic sh*t show - but was 100% wrong about the impact of this on the stock market. As the data below from Goldman Sachs shows, it was one of the strongest, most complacent years EVER for the U.S. stock market: 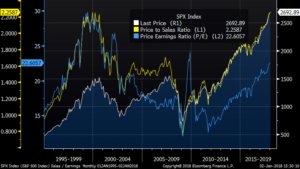 The S&P 500 is now trading at 2.2587x Sales…eclipsing the month end peak in Dec 1999 of 2.2544.  Chart below also includes PE ratio (blue) which, unlike Price/Sales, is affected by buybacks/reduced share count. 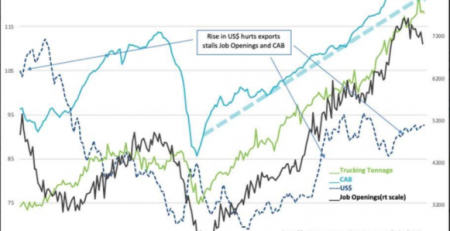 Institutional investors and consultants are always looking out for market trends that may impact their existing or future investment decisions. Knowing what’s being screened on eVestment through the company’s... Read More