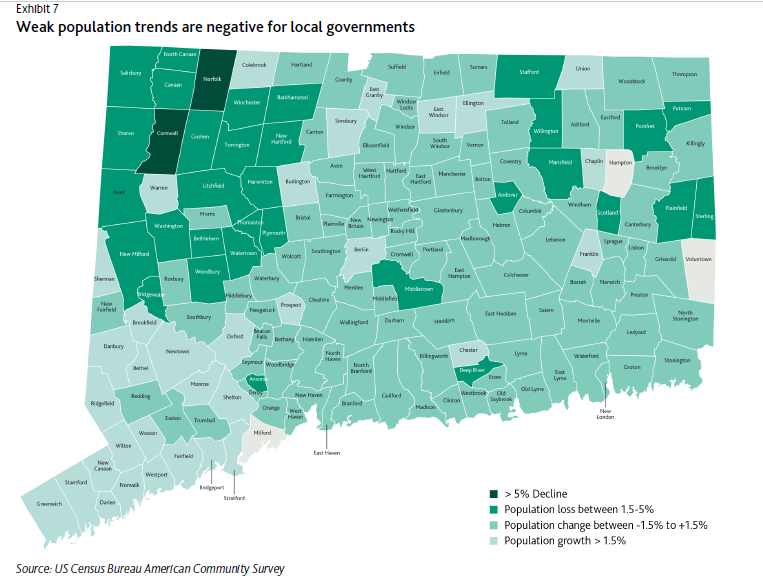 As economic growth surges in Connecticut, a degree of pessimism persists and its pension system may be in for some further shocks. Moody’s Investors Service, for instance, points to “ongoing fiscal challenges” that will largely impact the states in different ways combined with “adverse” demographic trends that make local government bonds in the region risky to different levels.

In January, when the US Commerce Department measured third-quarter economic growth, Connecticut was the eighth fastest growing state in the nation. Its 3.9% annualized growth rate was faster than the US average as it beat regional New England competitors as well.

The change was a stark contrast to virtually zero growth in 2016 and negative 4.4% slide at the start of 2017. Economists warn that the three-month analysis was too small a sample size to christen this a trend and that gains posted in finance and manufacturing, the two primary industries in the state, is part of a nationwide trend and not entirely regionalized.

The state has moved from being highly competitive nationally, ranked 8th most competitive by the Beacon Hill Institute in 2001, to ranking 43rd in 2016. There is also an issue of wealth flight. The average household income was moving into the state $93,000 while the average moving out is $123,000.

“Corporate out-migration remains a challenge,” Moody’s Analyst Joseph Manoleas wrote in a March 22 report. While proximity to New York City is positive, there are forces at play underneath the tax structure that makes the state’s revenue picture “incredibly volatile,” according to Stanley, Black & Decker CEO Jim Loree.

Just over one-third of the state’s personal income tax comes from 10 towns and 12% of the tax burden is paid by 357 families alone, meaning a few hundred departures would lead to a significant shock. The reduction in SALT has not helped on this front…

While the third quarter numbers are positive, examining job growth from 2016 to 2017, Connecticut lags both New England and the rest of the US in just surpassing 0.4% growth, according to the US Bureau of Labor Statistics. Massachusetts, for instance, has job growth closer to 1.8% while the US average was closer to 1.5%.

As the population ages that, too, points to a challenging future.

“Weak demographic trends will continue to pressure the state and local governments, potentially constraining economic growth and weakening tax revenue,” Moody’s noted. From 2010 to 2016, as the nation’s population grew at 4.7%, Connecticut only increased by 1% since 2010 and in fact, declined each year from 2014 to 2016.

This can make for a precarious financial situation, as the state moves to subsidize leading firms such as hedge fund Bridgewater Associates for staying in the region, this also tilts the revenue scales to favor select geographic areas.

“The suburbs of Connecticut are massively subsidizing the cities of Connecticut,” Kevin Sullivan, the state’s commissioner of revenue services, was quoted as saying.

Moody’s observes that Connecticut local governments receive a median 68% of revenues from property taxes, which varies significantly from town to town. The state contributes 20%. “Towns and cities with less reliance on state funding are less vulnerable to the financial and political swings of the state and therefore have more financial flexibility than peers with a greater reliance on the state,” the report said, pointing to a common theme.

With more than half state revenue coming from income tax – the state raised taxes three times – the result could be a vulnerability if the economy changes, with Loree noting it is “very vulnerable to market downturns.” This is particularly true as spending eclipses growth.

With the “very serious problem” of the state’s debt and unfunded pension liabilities totaling $85.5 billion in 2016 and growing, Moody’s notes that are investing in a regional bond offering is made by recognizing the stability of the revenue stream that supports it. 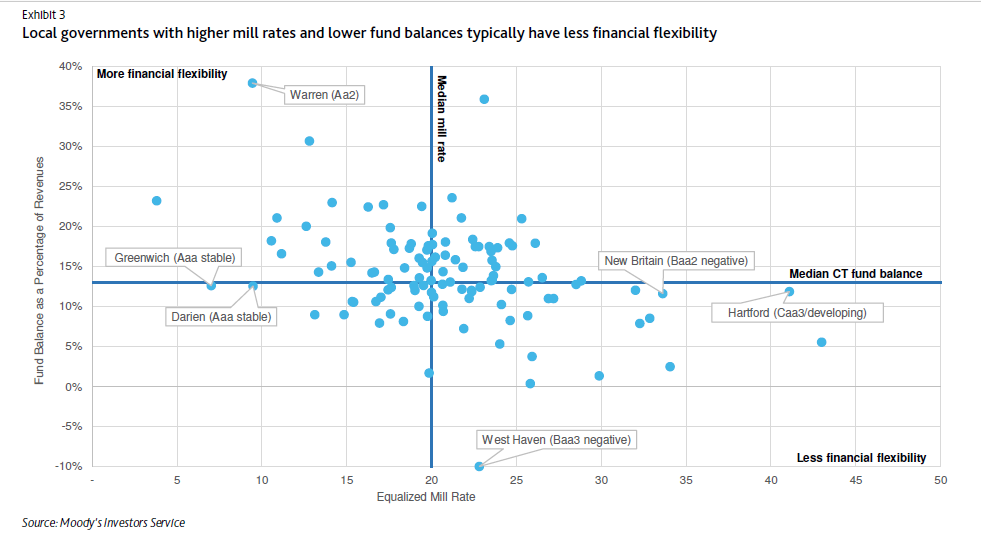 Quick Notes to book I read many years ago. "Common Stocks and Uncommon Profits And Other Writings." The author is Philip A. Fisher. by Redfield, Blonsky & Co. Get The... read more

What Does Real-Life Divorce Tell Us About Brexit?

What does real-life divorce tell us about what to expect from the Brexit process? Analysts at Source, the multi-asset research platform ask this question in a research report published... read more

Motiwala Capital annual letter to investors for the year ended December 31, 2017. Dear Investors, During 2017, global equity markets rose non-stop and relentlessly. The US markets did not experience a... read more

Bill Nygren of Oakmark is out with his Q2 shareholder letter to investors. You can see the letter from Oakmark's David Herro here. Bill Nygren discusses the Fed and... read more