GeoPolitical Risk Is Low, Or Is It? – ValueWalk Premium 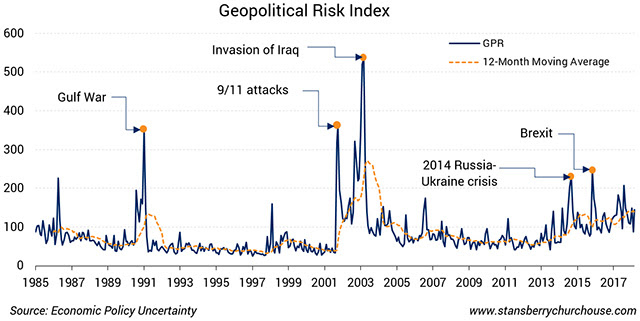 GeoPolitical Risk Is Low, Or Is It?

Almost as bad as falling markets, are markets chasing their tail because of geopolitical risk.

The future is – by definition – uncertain. That’s one of the few constants in the universe. Measuring uncertainty is also, well, uncertain. It’s more subjective than (say) volatility, or stock market valuations. Uncertainty is a feeling, rather than something concrete.

And there are different brands of uncertainty. One that particularly interests me – partly because it’s such a wild card, and partly because I worked in the field for a number of years – is political risk.

One way to measure political risk

Two academics, Dario Caldara and Matteo Iacoviello, developed an index to measure geopolitical uncertainty. The Geopolitical Risk Index tracks the frequency that words related to geopolitical tensions are used in 11 major international publications. The number of articles concerning geopolitical topics, as well and the number of “hot” words in each article, are used to calculate the index. The more mentions, the higher the index rating.

As shown in the graph below, the Geopolitical Risk Index reflects the spikes in political uncertainty and volatility that follow major events in global politics. Major spikes happened around the time of the first Gulf War, the 9/11 attacks, the invasion of Iraq, Brexit and other events.

The all-time high in the index was in April 2003, with the invasion of Iraq. The second-highest reading was in September 2001, in the aftermath of the attacks on the World Trade Center and other targets in the U.S.

The Geopolitical Risk Index has averaged a reading of 138 during the presidency of Donald Trump. That compares to an average of 83 during the eight years of the Obama government in the U.S., and an average reading of 81 over the lifetime (since 1985) of the index. The 12-month rolling average line in the graph above shows a steadily increasing average index level, since bottoming out in 2013.

And if anything, the index looks to increase in coming months. Twittering uncertainty in the U.S. White House… a nuclearised North Korea… the possibility of increased cyberattacks… continued deterioration in the U.S.-Russia relationship … not to mention the very real risk of an escalation in the simmering U.S.-China trade war, all contribute to elevated levels of geopolitical risk.

Trump has warned that recent actions against China are the “first of many”. And China has already threatened “all necessary measures” in response to tariffs. (You can learn the full story of the U.S.-China trade war… and how to profit right here.)

More broadly, as we’ve written before, Trump has taken a “Fortress America” approach to global trade, and a sharp turn away from globalisation. And things are likely about to get even more tense between the U.S. and the rest of the world…

On March 22, John Bolton, a hawk’s hawk in terms of American foreign policy, was named as the next U.S. National Security Advisor. It’s one of the most important posts in the formulation and execution of American policies towards the rest of the world.

Bolton has repeatedly disdained the United Nations, and his public statements suggest that he views China as a hard-core adversary. He’s openly advocated preemptive strikes on North Korea’s nuclear programme, and he’s against the Iran nuclear deal. Regardless of whether these are smart policies, the fact that they fly in the face of current U.S. government policies suggests that geopolitical uncertainty – and risk – will rise.

Conventional wisdom suggests that markets tend to perform better with a stable geopolitical backdrop. However, this is often is not the case. And despite rising geopolitical tensions since Trump was inaugurated, U.S. markets are up strongly.

However, recent weak global stock market performance following Trump’s trade war saber-rattling might mean that this correlation will increase in coming weeks and months. That, added to continued concerns over high valuations (particularly in U.S. markets) could spell trouble.

The Importance of Self-Assessment - Howard Marks of Oaktree Read More

Chesapeake Energy Corporation (NYSE:CHK) seems to have perpetually mounted its flag in the front yard of leading media houses. The energy heavyweight has yet again made the headlines following dramatic... Read More

Joining a growing list, Will Smith recently jumped on the bandwagon and proclaimed himself a fan of the Buffet Rule. Yes, Fresh Prince of Bel-Air fans, Smith is a... Read More

For a lender, it is seldom a good idea to covet exposure to a corporate borrower where their debt payments are larger than total earnings, but that is the... Read More

Wednesday was a busy day for oil watchers. Following comments from the International Energy Agency on Tuesday, Goldman Sachs published a report this morning saying about it expects the oil... Read More