Last week, the Organization for Economic Cooperation and Development (OECD) released its Interim Economic Outlook, containing revisions to its November 2017 forecast. The updated forecast shows real GDP growth for the world of 3.9% in 2018 and 2019, an acceleration from the estimated 3.7% growth we saw in 2017. While global growth will continue to strengthen over the next two years, the OECD highlighted rising economic and financial tensions that could threaten growth prospects in the medium term. These include varying paces of tightening monetary policy across advanced economies, high-debt and high-asset valuations, and escalating trade tensions that could be damaging for growth and jobs.

Earlier this year, the International Monetary Fund (IMF) published an interim update to its World Economic Outlook. Similar to the OECD revisions, the IMF’s forecast for global GDP growth was upwardly revised from its October 2017 publication.

U.S. Growth Expected to Accelerate in 2018

On the heels of a 2.3% expansion in 2017, the OECD is forecasting that U.S. economic growth will accelerate to 2.9% in 2018, followed by 2.8% growth in 2019. The forecast was revised up significantly from November 2017, reflecting strong momentum in domestic demand and the tax reform law passed in December. 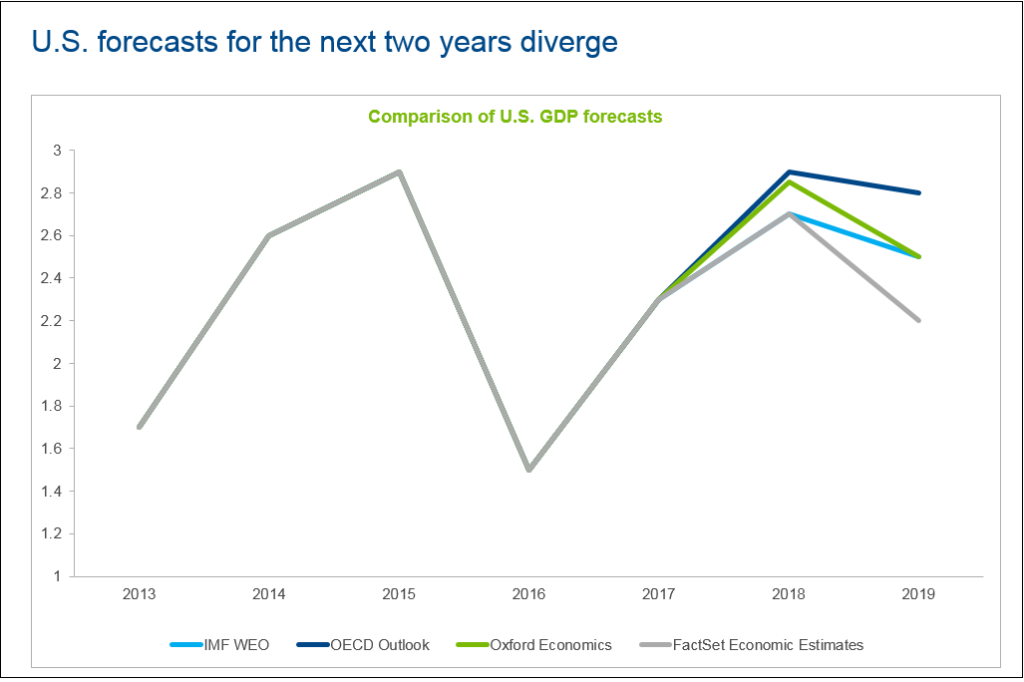 The Eurozone’s Economic Momentum Continues into 2018, While Brexit Continues to Weigh on the UK Forecast

In the eurozone, the positive economic momentum of 2017 is projected to continue into 2018. Following a surprisingly strong 2.5% expansion last year, the OECD is projecting 2.3% growth in 2018 and 2.1% growth in 2019 for the entire eurozone. 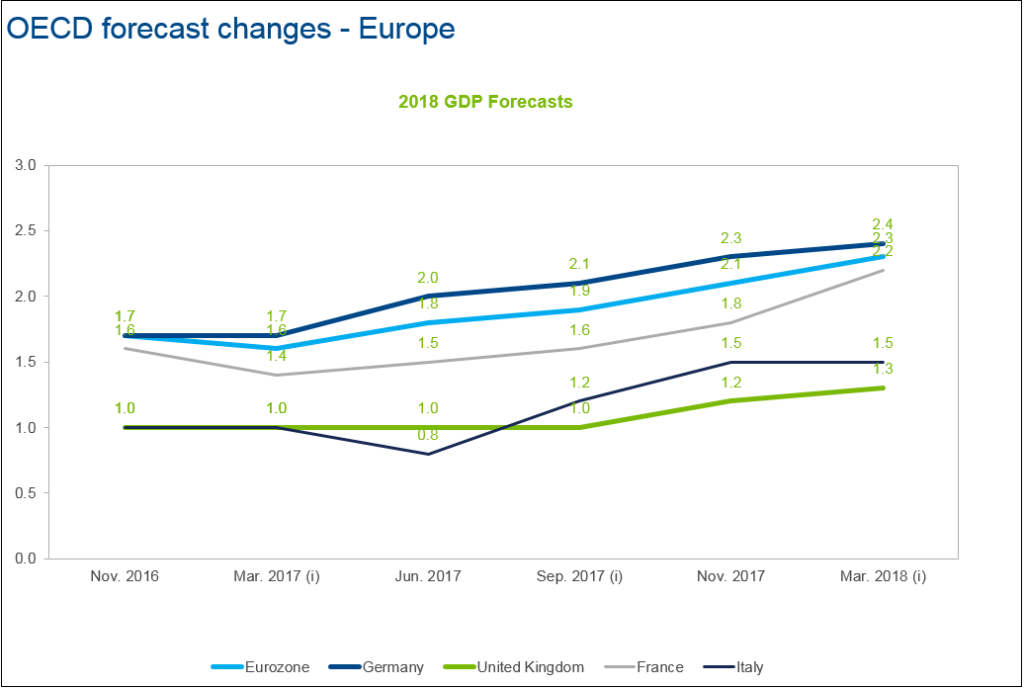 In the United Kingdom, the story continues to be Brexit. Uncertainty surrounding the UK’s exit from the European Union is hurting business confidence and the weak pound has boosted inflation and suppressed private consumption. Following a 1.8% expansion in 2017, the OECD forecast has real GDP growth slowing to 1.3% in 2018 and 1.1% in 2019.

Economic growth in Asia is strong, but the growth trajectories vary widely across countries. While the OECD has growth for Japan lagging other countries at 1.5% and 1.1% in 2018 and 2019, respectively, the outlook for Japan has greatly improved in recent months. In its November 2016 Economic Outlook, the OECD was projecting 2018 growth of just 0.8%.

In China, 2017 economic growth of 6.9% was well ahead of the government’s 6.5% target. Last year's growth was boosted by strong external demand; while this is likely to continue into 2018, tighter financial regulations should help to reduce domestic financial risks, which will likely suppress domestic demand.

As Australia begins the 27th year of its economic expansion, the economy is expected to continue on its current course.

2018 Off to a Strong Start, But There Are Risks

As we begin 2018, the economic story is largely a continuation of what we saw in 2017. In the U.S., strong domestic demand and recent fiscal easing are tailwinds as we enter 2018; however, the prospect of an accelerated pace of interest rate hikes could create a strong headwind as we approach 2019. Meanwhile, in the eurozone and Asia, strong consumer and business sentiment, relatively loose monetary policy, and strong external demand are all positive factors that appear to be carrying over into 2018. However, there are global risks to the medium-term outlook from potential imbalances due to high-debt and high-asset valuations and escalating trade tensions.

For all of the numbers behind these forecasts, watch our webcast: Economic Forecasts for 2018 and Beyond

NQ Mobile has been under pressure since Muddy Waters accused the company of various wrongdoings. The fight has lasted several months with no victor in sight. NQ Mobile recently... Read More

Brevan Howard, Europe's largest hedge fund with $40 billion under management, slid in the red zone in all of its major hedge fund strategies in last month. Brevan Howard... Read More 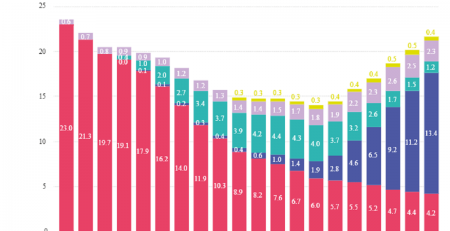 Here’s my latest article on Seeking Alpha. This is a preview. You can read the full article directly on Seeking Alpha here. Q3 2021 hedge fund letters, conferences and more Why... Read More

Don't Be Spooked by Market Volatility-Opportunity Is Still Knocking! by Frank Holmes One of the greatest fears this October—possibly the most volatile month of the year—has been the correlation between... Read More

When Should the Intelligent Investor Sell A Value Stock? (Part 2)

When Should the Intelligent Investor Sell a Value Stock? (Part 2)  by Evan Bleker, Net Net Hunter One of the most asked questions is when an investor should sell a... Read More