Asset managers are facing an uncertain future, a report from Morgan Stanley notes. And the stock market continually rising over the previous nine years isn’t helping, it is only masking the challenging problems ahead. 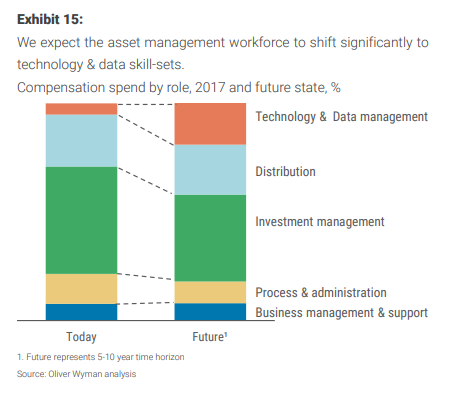 Are asset managers an endangered species?

A key bellwether is fee compression. The good news in 2017 is that assets under management grew by 13%. But that headline number doesn’t reflect the reality that much of that gain was driven to the beta of stock market returns. 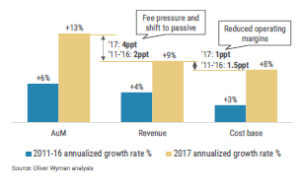 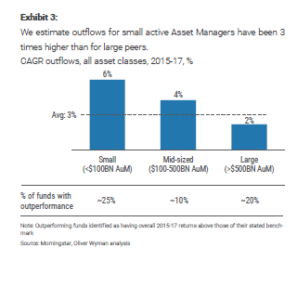 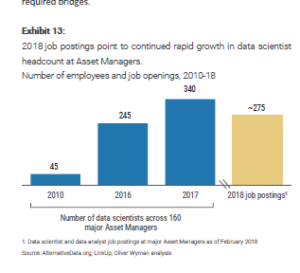 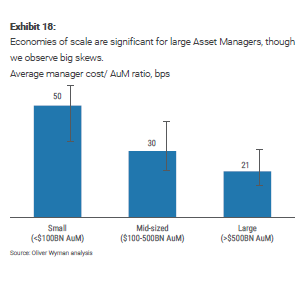 While AUM grew, revenue growth trailed by 4% and the gap is widening, a Morgan Stanley / Oliver Wyman paper titled “Winning Under Pressure” observed.

“Buoyant global markets have bought time for Asset Managers,” pointed out a headline that showed how fee compression and a potential bear market might reshape the asset management industry irrevocably. “The removal of central bank liquidity from markets has been a significant driver of more conducive conditions for active managers and – at an industry level – outflows from active strategies halted in 2017. Yet structural pressures did not abate.”

At its core, central bank stimulus has inflated asset markets, which was part of the design. Now, with globally coordinated central bank activity withdrawing market support, some market participants are concerned.

The question for asset managers, most of whom are long only, becomes: how can they survive in a market environment that turns bearish?

“A bear scenario could trigger much deeper restructuring” among asset managers and “is likely to have a more sustained impact than in the past,” the report noted:

In prior cycles, it has taken AuM less than ~3 years to recover, hence limiting the need to structurally address the cost problem. We believe that in the current environment of increased regulatory scrutiny and a growing demand for value-for-money the next bear market may have a more sustained impact by triggering a shift in pricing levels on the back of distribution models where Asset Managers will become more of a price taker.

Overall, the decline would be nearly 30% in the next three years under the worst case scenario! 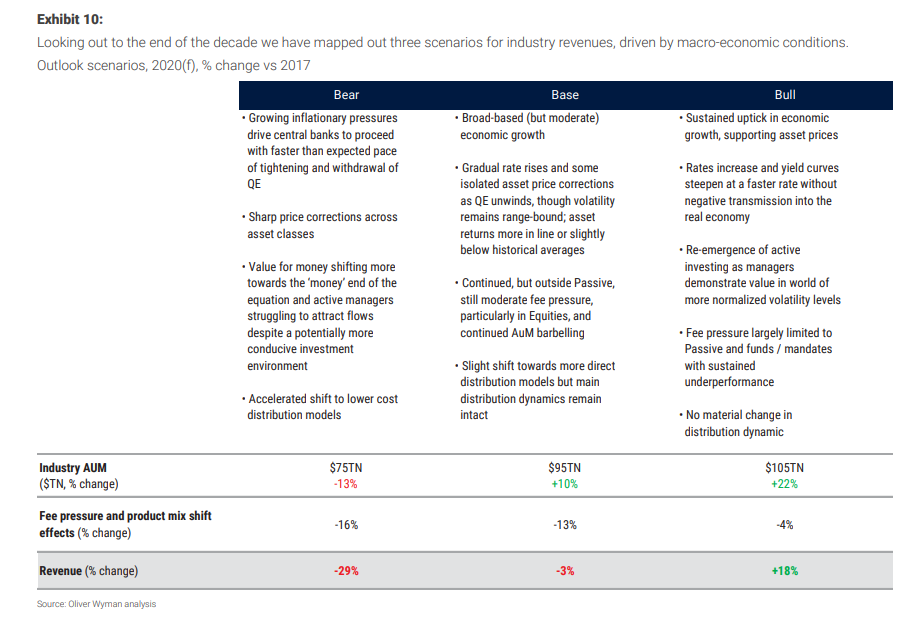 Looking into the future, asset managers will likely face “continued cost challenges could reach a critical level.” This comes in a world where “costs have not been contained” with an implication that operating margins “are vulnerable.”

Data science and artificial intelligence can help streamline the investment and distribution processes – but this will only be a source of real alpha for a few. Building an edge around proprietary data and analytics is increasingly difficult as publicly available data and algorithms proliferate. While technology offers great potential to streamline the investment process, we think only a handful of managers with truly distinctive talent models or sources of proprietary data/analytics will be able to use this to drive alpha. Applying these techniques to better hone and target distribution may have a more immediate impact. 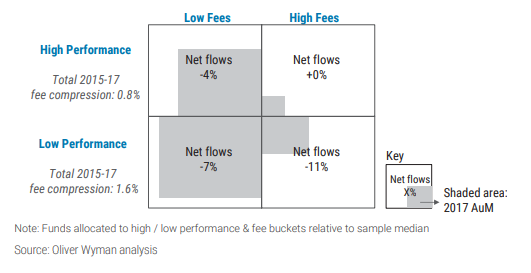 Regarding investments in artificial intelligence, Morgan Stanley believes it will be “an arms race” but could “go beyond financial firepower.” Asset managers need a niche and a technical advantage.

For success to occur, their needs to be cultural integration with technical expertise. Technology-based executives respond to a very different work environment than do Wall Street executives, but both most focus on risk management to prosper in the future.

The future could see a new distribution dynamic, one that moves from human-based advice to an Amazon-like warehouse approach in which delivery is unbundled mainly from advice. “This is the exact opposite from how most markets are structured today where advice remains bundled and intermediated, for example via bank distributors, independent financial advisers (IFAs) or investment consultants,” the report noted. “Such an outcome would lead to significantly more price transparency and a magnetic pull to Vanguard-like pricing for active management.”

Morgan Stanley estimates such a move could eliminate up to 50% of industry revenues as large emerging markets like China could take the lead.

The worst has been for “small” asset managers which MS defines as under $100B. For asset management industry that would be on the lower end of the major money managers, but in the hedge fund industry just $99B would put you among the top AUM holders. It is unclear if MS thinks this bleak scenario applies to all hedge funds besides Bridgewater Associates.

Positive trend and positive carry are the best of both worlds, a white paper from PIMCO concludes read more

The list of funds who tumbled in May and have continued to under-perform in June is getting longer by the day. Credit focused funds, especially those who trade mortgage backed... read more

Charts via Novus Research It is not everyday that shortsellers get the chance to be proud of their returns. Many recent shorts have experienced much headache before before they the trades turned... read more

Eyal Winter - Feeling Smart: Why our Emotions are More Rational Than We Think     Published on Dec 11, 2015 Saïd Business School is delighted to welcome Eyal Winter as part of... read more

Last week, Facebook Inc (NASDAQ:FB) released its highly-anticipated second quarter earnings report. It disclosed a net loss of $157 million ($0.08 a share) thanks to expenses from its May... read more