Now “Inflation” Is A Concern?

The consensus on inflation is that it will rise sharply. The history on correctly predicting inflation trends leaves one with little confidence in the consensus. Looking back at the historical data provides new insight, but provides no guarantee for inflation’s trend the next several years. One can visualize why Inflation is difficult to predict and why it could be different this time. Much depends on how government spending occurs.

There have been various theories on the sources of inflation. Many, including the Federal Reserve, have ascribed to Martin Feldstein’s ‘quantity of money’, but even he has been having doubts lately:

Others believe inflation comes from rising commodity prices or rising demand for labor. Our current economic cycle proves these theories incorrect and suggests a different answer.  Long known as ‘bad money drives out good’, Gresham’s Law, sometimes called Copernicus’s Law, is based on the observation that government spending decisions are the source of Inflation. Government spending is often based on creating currency out of thin air through borrowing which is never repaid. The results of government spending often result in capital destruction, i.e. government spending does not add appreciably to Real GDP. This dilutes the value of existing currency resulting in inflation. A recent example of this in the US was the 1970’s ‘Great Inflation’. Government spending on the ‘Great Society’ in an eradication-of-poverty experiment only concentrated the poor into cities-of-poverty which decades later required dismantling. Globally, Venezuela is a current example of government spending leading to levels of inflation not seen in any country since Germany’s Weimar Republic Hyperinflation-Weimar Republic.

The economic data today offers strong evidence that Government Exp&Inv as the source of past inflation. One has to keep in mind that economic activity has many moving parts and identifying correlations sometimes requires decades of data. The past 10yrs have revealed clear patterns not easily discernable in earlier times. The long held belief that M2 was the primary determinant of inflation was dispelled with the Fed’s recent claim that it could re-inflate the economy by expanding M2. In US Real GDP, Real Private GDP, Real Govt Exp&inv, M2 & Core Inflation since 2009, M2 rose sharply but Inflation fell sharply. M2 expansion was not inflationary as predicted. In Inflation vs. $WTI the BLACK DOUBLE ARROWS indicate the uncorrelated periods of Inflation and $WTI. Sometimes $WTI rises and falls with Inflation, often it does not. If one examines the data monthly, it is clear that investors drive $WTI trends when inflation/deflation trends are already in place. The same is true of Gold prices(not shown). Gold and oil prices are highly correlated to media headlines and trend 6mos-12mos after changes in Inflation. This is reaction not causality!

Inflation insight is gained when one begins to consider the impact of Gresham’s Law and the percentage of Government Exp&Inv component of US Real GDP. Government Exp&Inv as a percent of Real GDP has fallen from 40% range during No. Korean War to it lowest level historically, 16.9%(does not include transfer payments of Social Security/Health Care). Government spending an important component of Real GDP in 1947 as gradually diminished. Even so, when Government Exp&Inv has surged shortly after an Inflation rise follows. One can see this with large Federal programs such as the 1950s Interstate Highway System, periodic military spending, the ‘Great Society’ and “Man on the Moon’. Just as Inflation rises with the rise in government spending, it can be seen that the ~1.99% annual slump in spending during the 2009-2017 ‘Sequestration’ correlates with falling Inflation. Even with $WTIat a high price and M2 sharply higher, Inflation fell with ‘Sequestration’. US Real GDP vs. Total Govt Expenditure & Investment from January 2000 provides a more detailed view of this period of slumping government spending.

Note that government spending since July 2017 begun to rise. Is a rise in Inflation ahead? The 12mo Trimmed Mean PCE(the Dallas Fed inflation measure) has been relatively stable in the 1.5%-2% range since 2012. (The 12mo Trimmed Mean PCE is a component of the ‘Natural Rate’ which is a useful measurement of fair 10yr Treasury rates and the SP500 Value Investor Index) Military spending is one area in which we are seeing increased spending. Military spending has been particularly inflationary because military action destroys its capital and leaves behind a diluted currency base with no increase in permanent value relative to other assets such as a society’s intellectual capital, infrastructure and goods and services. Whether inflation rises going forward or not is dependent on ‘how’ government spending is managed. Is this time different? 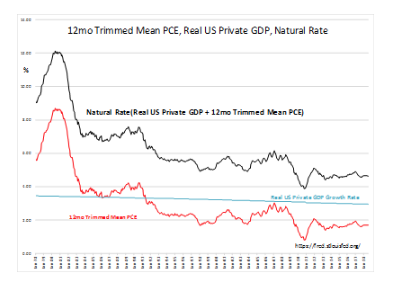 There is a new administration which thus far has a focus on government receiving value for its spending much like the ordinary consumer. Predicting Inflation is not simple in the current environment. Historically, government programs have charged ahead with grand designs of favorable outcomes spending quickly to put in place the structure needed to impact the next election cycle. Often, cost-overruns have ballooned programs with political tinkering which we would not accept if it were our own pocketbook. In the last 14mos of the new administration, the US has achieved military/diplomatic outcomes using current resources without a great spending increase. There are no large government spending programs on the immediate horizon. Much of the current activity has been in policy adjustment. It is likely that military spending will increase as it acknowledged that the US readiness has suffered with ‘Sequestration’. But, an Inflation impact is not certain.

History supports not deviating from buying good companies when they are relatively cheap. That is the only strategy which works well. Good companies, if they need to, adjust to Inflation. If the market provides opportunities to buy good companies at a discount, this has always been the best means of outpacing Inflation.

Mr. Bean here. There aren’t many investors compounding capital at double digits over the course of decades and those that do are already well known (i.e., that guy from Omaha).... read more

After having kept several franchises open on Thanksgiving, and posting a surprising U.S. sales growth of 2.5% in November, McDonald's Corporation (NYSE:MCD) has decided to keep its franchises open... read more

From Bruce Berkowitz Fifty-three additional documents obtained through legal discovery in Fairholme Funds, Inc., et al. v. United States have been unsealed and made available to the public this week. In... read more

What could possibly go wrong? That’s the title of a recent research report from Source Research the multi-asset research outfit, founded by ex SocGen analysts. It seems the analysts... read more

Bill Ackman is the closer this year, so have ya popcorn ready. Yet, it likely won’t be any real surprise. Look for big Bill to come out in his... read more