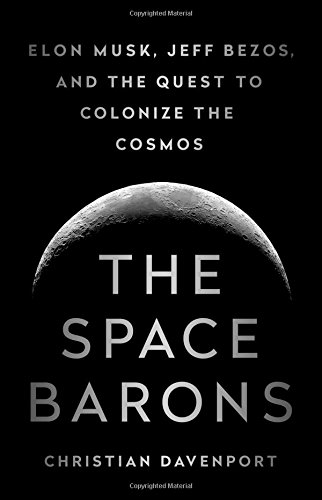 I have my feet firmly planted on the earth’s surface, with no desire to travel into space. But that doesn’t undermine the pull of Christian Davenport’s The Space Barons: Elon Musk, Jeff Bezos, and the Quest to Colonize the Cosmos (Public Affairs / Hachette, 2018). It’s a tale of intense competition, dueling styles, and cosmic dreams. 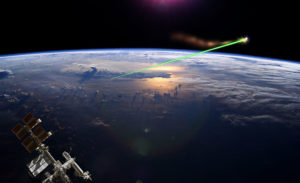 By Fulvio314 (Own work based on NASA pictures +) [CC0], via Wikimedia Commons

The Space Barons: Elon Musk, Jeff Bezos, and the Quest to Colonize the Cosmos by Christian Davenport

By Fulvio314 (Own work based on NASA pictures +) [CC0], via Wikimedia Commons

The book focuses on SpaceX and Blue Origin, although it also touches on the endeavors of Richard Branson and Paul Allen and other pioneers whose names are not so well known.

Elon Musk’s SpaceX is normally center stage in any discussion of private, entrepreneurial space exploration. Musk is, as Davenport describes him, “the brash hare” with a knack for grabbing the limelight. (Who else would, in “pure Silicon Valley swagger,” park a shiny, white rocket that stretched seven stories long outside the headquarters of the FAA?) SpaceX’s mantra is “Head down. Plow through the line.” Jeff Bezos, by contrast, has been “the secretive and slow tortoise.” In fact, the turtle is Blue Origin’s mascot, the embodiment of one of Bezos’s favorite Navy SEAL sayings: “Slow is smooth and smooth is fast.” And the company’s only partially turtle-like motto is “Gradatim Ferociter” (step by step, ferociously).

Every?Book Elon Musk Has Ever Recommended

In prose more than worthy of a staff writer at the Washington Post, Davenport glides effortlessly between biographical vignettes, engineering and financial challenges in building spacecraft, government obstacles to private space exploration, project failures and triumphs, and rivalry as “the best rocket fuel.”

Balyasny Looks To Build The Amazon Of Hedge Funds, But Can He?

Musk and Bezos have different goals, goals that neither of them is likely to see achieved in his lifetime. Musk wants to colonize Mars, a “fixer-upper of a planet.” Mars could be a plan B habitat in case something horrific happens to Earth, such as an asteroid strike that threatens to wipe out humanity. Bezos wants to preserve Earth by zoning it “residential and light industrial” and moving all heavy industry into space. “The thing that’s going to move the needle for humanity the most,” he said, “is mining near-Earth objects and building manufacturing infrastructure in place.” Both goals seem—well—just plain weird. But then so was transforming a tiny online bookstore into a retail juggernaut and cloud computing service company. The sky is no longer the limit.

The Pakistani rupee, on Monday, sank to historic low level of 99.95 to a dollar in the open currency market, over forex reserves fears as the country repayed $146... read more

After making a detailed assessment of lessons from recent market episodes and historic crises, analysts at Oxford Economics observe that Brazil, Russia and Turkey head the list of potential... read more

The Dow Jones Industrial Average (INDEXDJX:.DJI) and the S&P 500 (INDEXSP:.INX) climbed to record intraday highs on Thursday, buoyed by a batch of better-than-expected earnings, as congressional testimony by Federal Reserve... read more

Keith Weissman On How To Assess Business Models [Podcast]

Nelson Obus: The Practical Challenges Of A Small-Cap Investor

The Great Online Bank Robbery of the Carbanak Cyber Gang stealing $1 billion from 100 banks worldwide marks the beginning of a new stage in the evolution of cybercriminal... read more