Crispin Odey has received the hug he so desperately wanted. It wasn’t a physical hug, but rather an embrace from a volatility-driven bear market that has gripped the globe. While others may fret over a market collapse, Odey finds his center as a “calm” spreads across his office.

“At last,” Odey proclaimed to investors in an Odey European March 2018 Fund Manager Report. 2018 has started positively for Odey’s famously bearish hedge funds. “On down days for the market, the fund has performed well.” 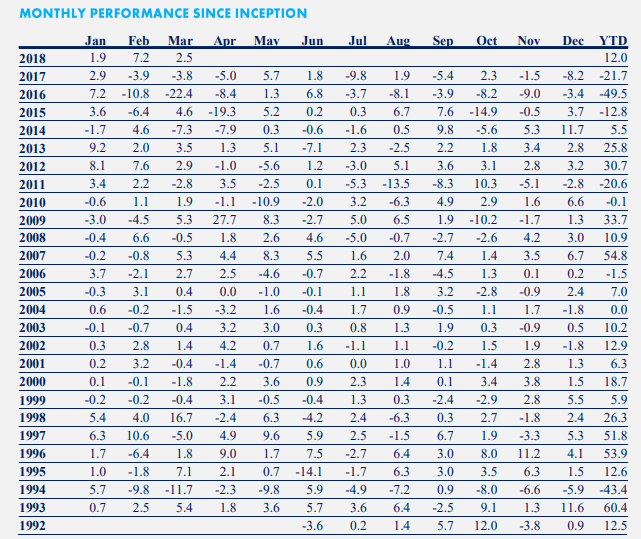 This has resulted, in part, in a 2.5% positive March impacting Odey European’s $668 million under management. Year to date the fund has delivered 12% to investors compared to negative 4.3% for the MSCI Europe Net Total Return stock index. The S&P 500 (SPX), by contrast, was down 1.17% in the first quarter.

While the positive performance on the downside deviation is meaningful, what resulted in the fund’s slide in 2017 also appears addressed in recent performance. When the market moves, higher “losses have been minimal.” The difference in enthusiasm is palatable.  “There is a calm in the office, and that is not just because so many faces are no more!”

Those voices of descent have been hand-wringing as a historic stock market bull has driven asset prices higher. The primary portfolio problem with short positioning is that during active beta-driven bull markets that lift all stocks, strategies such as Odey’s can find difficulty.

Looking forward, Odey sees a bull market in his office among analysts. “New ideas keep coming,” he said, pointing to both long and short plays. “Stock ideas are everywhere.”

On the long side, he likes Shiseido, SLC Agricola and Randgold Resources, a gold play he recently picked up when it fell to just nine times earnings.

One short idea is Metro Bank, “the challenger UK bank,”  that is a short idea. Reminiscent of 2008, he notes the UK loan book has grown by ten times in 6 years, much of it on the back of residential mortgages. Normally when a business expands market share, that is positive for earnings. But that is not the case. “Despite growing so fast, which makes you that much more vulnerable for picking up troubled loans, the bank has still not grown loans fast enough to keep pace with costs, so that the cost/income ratio is nearly 90%,” he noted.

He points to shares being highly rated, trading at close to 2.7 times book value for 30% of loans, a number that doesn’t square with potential problems. “They are big in the buy-to-let market in London, which with interest expense no longer offsettable against rental income looks a challenged business model,” Odey wrote. “A couple of difficult years and Metro Bank might not be even making it’s £69 million of expected profits, but watching non-performing loans undermining its balance sheet.”

Don’t expect positive performance. “It would be quite an achievement if Metro did not experience at least a 1% (non-performing loan) experience when the loan book has grown by £9 billion so quickly.”

It is not just on an individual level that he is concerned. Odey is likewise negative on the macro market environment.

Despite record retail inflows of new cash into equity markets in that first quarter, they ended down and have now begun the new quarter on a mute note. This was despite earnings coming through stronger than expected. Most troubling for markets has been the relentless rise in US 3-month interbank rates, which reflects tightening liquidity. Couple that with the growing twin deficits (budget and current account), thanks to Trump’s tax cuts, and a tariff war with the Chinese, and for the first time in two years, markets look vulnerable. When you add to that the complacency of most investors is it any wonder that stock markets almost everywhere look like they are at the beginning of bear markets?

For Crispin Odey, this is looking on the bright side.

Undervalued Countries Around the Globe Based on Valuation Metrics

Value investing – the concept of buying stocks when they are inexpensive – has been around for decades. It is not an easy model to follow as investors need... Read More

Time has come to head to the beach because I might start to sell ALL my miners after a 20% to 80% rise from the depths of the five-year... Read More

Rare David Einhorn video even if its about poker (although it was another disappointing year from the star player) and not investing, check it out below, also some tweets... Read More

Ron Baron, Baron Capital chairman and CEO, says the market will continue to move higher, and explains why he consistently invests on a monthly basis. Transcript: what i think is that... Read More