Gator Capital, the financial focused hedge fund, managed by Derek Pilecki, had an excellent start to 2018. During the first quarter, the firm produced a return of 1.19% for investors, outperforming the S&P 500, which was down to 0.76% over the same period.

The most prominent positive contributors to the portfolio during the period were Syncora Financial, Zions Bancorporation (warrants and stock), SunTrust (warrants and stock), and BBX Capital according to the letter, while the most significant detractors to performance were ColonyNorthstar, GSE Preferreds, and Kingstone Companies. At the end of the period, the fund's gross exposure was 103.6%, and net exposure came in at 85.8%. 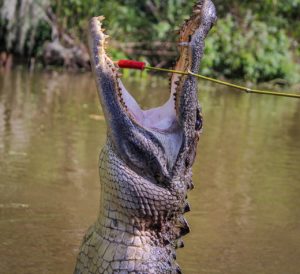 The bulk of Pilecki's first quarter letter is devoted to a discussion on European Banks, where Gator is reportedly finding some “interesting opportunities.”

While the US financial system has almost entirely recovered from the 2008 financial crisis, European banks are still struggling with ultra-low interest rates and high levels of non-performing loans. These factors mean the sector is trading at “valuations significantly lower” than US peers. “Plus, when the European Central Bank stops its bond-buying program,” Pilecki writes, “we think the European banks may have a tailwind of rising interest rates that they have not had for more than ten years.”

One Europe–based banking enterprise that has already found its way into the Gator portfolio is Barclays PLC. “Barclays has been a frustrating stock for investors,” Pilecki writes in his letter with the stock having returned -19% over the past five years, compared to the KBW Bank index return of 109% has the same period. However, following this performance the stock is close to being the cheapest in its peer group trading at price to tangible book value only 75%, compared to the likes of JP Morgan, Goldman Sachs and Morgan Stanley, which together trade at an average price to tangible book value of 170% — Deutsche Bank is the only sizeable Western bank with a significant institutional trading business that is cheaper.

Amazon Moves Into Banking In Further Step Towards World Domination, But One TBTF Bank Is Not Worried 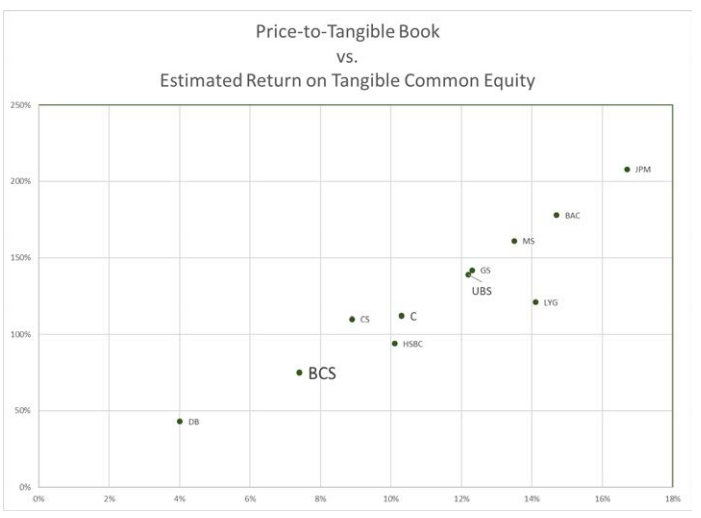 Unlike Deutsche Bank, Barclays is profitable and is expected to produce a return on tangible equity of 7.4% this year. “We don’t believe that profitable banks, especially ones that are expected to increase their capital returns to shareholders, should trade below tangible book value,” Pilecki writes.

Over the next few years, Barclays' management aiming to improve return on tangible equity to just under 10% before the end of the decade. If it manages this, the shares could be set for a re-rating up to book value as there is a linear relationship between banks' return on tangible equity and price to book. In his letter to investors, Pilecki opines that as returns push past 10% “we have seen other bank stocks trade between 150% and 200% of tangible book value.”

In 2017, ROTE was 5.6%, and management has publicly set a target for 10%+ by 2020. Several key catalysts will ignite this returns growth. Next year the bank will be able to call £3 billion in crisis-era preferred stock, which has a 14% coupon attached. Repaying this debt will save Barclays an estimated £420 million annually improving ROTE by 85 basis points per annum. Another £3 billion of subordinated notes with rates of 10% full due in 2021.

Another lever management can pull to improve returns is cost cutting and overspending. The bank has a goal of reducing costs by £300 million to £600 million, increasing returns by an estimated 100 basis points at the top end. Efforts to reduce costs will also help the bank achieve better economies of scale according to Pilecki's letter. “The main way to reduce costs will be from gained efficiencies of consolidated technology platforms. Barclays has created a shared services organization where the main business units turn to for common systems. Barclays launched this shared services organization in 2017, so the bank should benefit future operating leverage.”

Then there's the benefit the bank will see from reduced spending on restructuring. Barclays has been spending an estimated £500 million running off and selling non-core operations, excluding another £700 million in costs to accelerate restructuring. Substantially all restructuring costs should be behind the group by the end of 2019 according to Pilecki.

As well as these tailwinds, the group should also benefit from rising interest rates, less attention from regulators and an improving capital position. As earnings improve over the next few years, the bank should be able to build its capital to levels equivalent with US peers. Today, Barclays has a Tier One capital ratio of 13.3%, up from 11.4% in 2015 but still below the 16.5% of Morgan Stanley. This should allow management to increase capital returns to investors, something CEO Jes Staley hinted at when speaking at the Morgan Stanley conference in late March 2018:

“And if you look at what's going on with the US banks, for instance, they are returning more than 100% of earnings in stock buybacks and dividends, going back the last couple of years. That is, in fact, what has moved those stocks well north of book value.

If you look at two of our major banks in the UK, HSBC, and Lloyds, in one case, they are over 100%, and the other case is fairly close to 100% of earnings. So take any EPS assumption you have about Barclays and imagine where we're going to be when we are similar in place to where the US banks are and we’re returning close to 100% of our earnings back to shareholders. I think that will speak for itself.”

And as well as all the positive tailwinds listed about, Barclays has recently attracted the attention of activist investor Edward Bramson of Sherbourne Investors, who has a history of engaging with management to drive improved shareholder returns.

Altogether, Pilecki believes that Barclays today is “trading similarly to how the US banks did in the Spring of 2016” before they reached their targeted capital levels and started to return cash to investors. When buybacks were introduced, investors started to award these businesses higher valuations. “We believe Barclays stock will rise once the bank implements a stock buyback” the letter concludes.

Glenview Delivers 19 Percent Return As Robbins Discusses the Road Ahead

Hedge fund manager Larry Robbins, the hockey playing head of Glenview Opportunity funds, is probably the master story teller in the hedge fund industry. With all due respect to... Read More

Billionaire Carl Icahn comments on why he thinks Apple should use its cash to buy back stock. He speaks with Trish Regan on Bloomberg Television's "Street Smart." (Source: Bloomberg)   Icahn:... Read More

Christian Olesen On Whether He Uses Checklists Read More 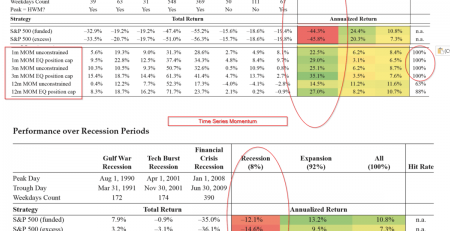 OFR: CCP Attempts To Reduce Counterparty Risk, But Creates Its Own Risk

As risk is transferred to a central clearing mechanism, gauging that risk and funding risk management are considered Read More

Citadel Advisors LLC has purchased 4,008,981 shares of Brinker International, Inc., according to a 13G filed with the SEC. The value oriented hedge fund run by Ken Griffin, is now the... Read More