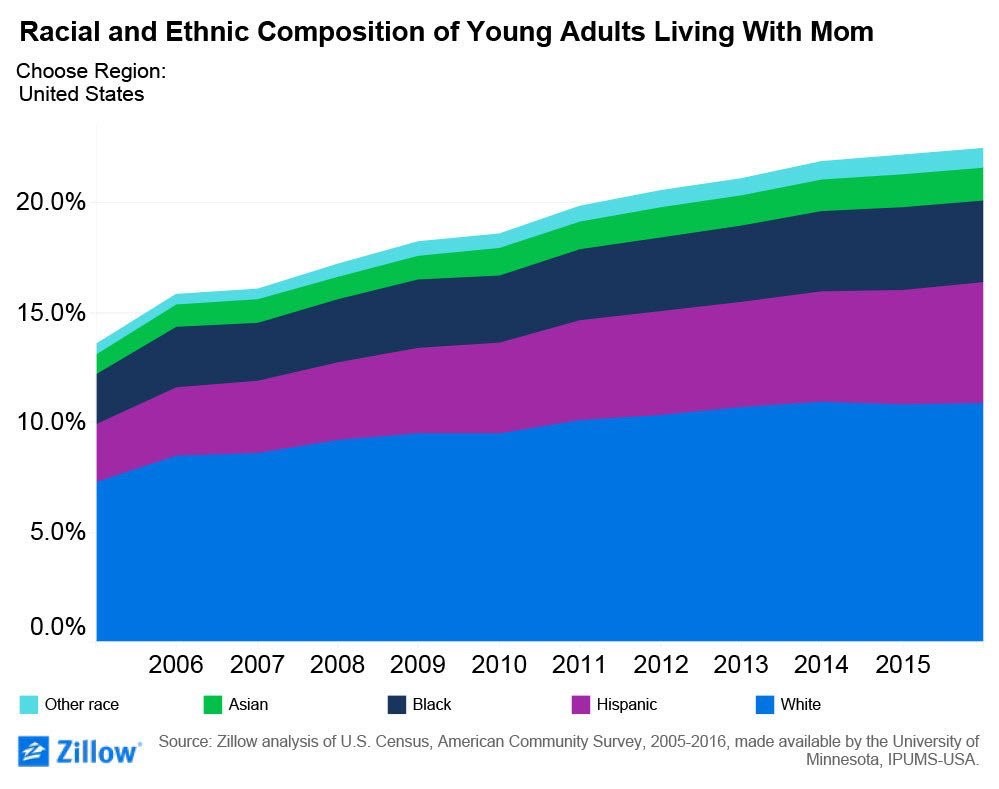 The economic expansion from 2009-2018 hasn’t been helping most millennials because the biggest benefits have been gained by those who own assets like stocks. Without asset price improvements, this recovery hasn’t been great as the employment to population ratio has improved, but wage growth has been mediocre. The catastrophe that would be graduating without jobs offers has become less common the longer this expansion has lasted, but that doesn’t mean people in their 20s and 30s are doing well. Graduating with $50,000 in debt and making $50,000 per year at your job isn’t exactly living well. Whenever asset prices go up, the poor are helped less than the rich which is why it’s difficult to bring people out of poverty with the use of monetary policy. The generational divide caused by student loans pushes most people in the millennial generation towards poverty.

There’s a term known as ‘house poor’ which is when someone lives in a house, but they can barely afford the mortgage payments, so they don’t have much disposable income. Millennials are similar except they are ‘degree poor.’ Their long term job prospects are positive because of their education, but they can’t advance in their life because of the severe burden of student loans. Your 20s and 30s are supposed to be the most exciting time of your life because it’s when you are free to explore opportunities and are healthy enough to do so. If you can’t even move out and get an apartment because of student loans, it makes the benefit of improved job prospects not look so great. The problem is for many careers getting a degree isn’t a choice.

Living At Home Is More Popular

The chart below shows the composition of young adults ages 24-36 who live with their parents.

The total percentage has increased from 13.5% in 2005 to 22.5% in 2016. Each group has increased its percentage; Blacks and Hispanics have seen their percentage increase the most rapidly as they are the most likely to start out in a challenged financial situation.

Let’s add some more stats to this discussion to give it greater meaning. 71% of bachelor’s degree holders graduated with student loans as of 2012. It’s difficult to work through school to graduate without debt because tuition prices have soared and many internship programs are unpaid. The paid internships are obviously much tougher to acquire than the unpaid ones. Getting an unskilled job might pay well, but it doesn’t progress the student’s career.

It’s difficult for baby boomers to understand the situation millennials are in especially after they have seen their retirement accounts increase in value after one of the best bull markets in history. Here’s a stat which will help them understand. The median net worth of 25-34 year old Americans with a college degree and student debt went from $7,100 in 2013 to $-1,900 in 2016. Tuition and textbook costs have grown faster than wages, so the situation has gotten worse instead of better. These millennials won’t be in an ideal circumstance to deal with a recession if one comes in 2020 like the yield curve currently predicts. 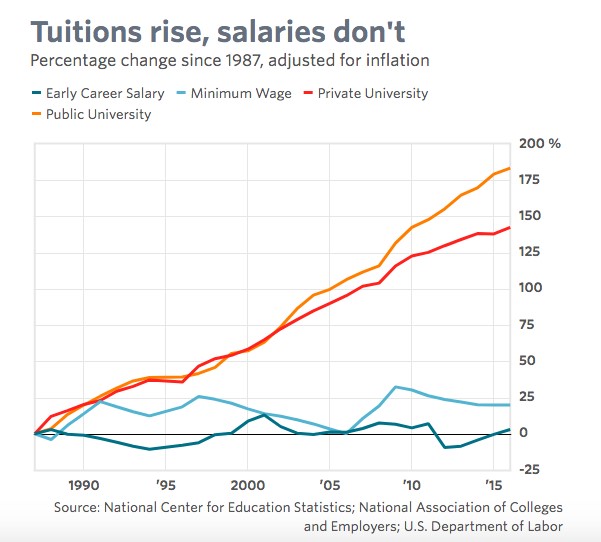 How Will It Burst?

The chart below shows a stat rarely reported on in the media.

The student loan debt growth rate has been declining since 2008. The growth rate as of Q1 2018 has fallen to 5.4%. This chart isn’t reported on much because it doesn’t elicit fear. However, you shouldn’t interpret this chart as support for the argument that the situation is improving because millennials have already accumulated student debt and tuition prices are still increasing rapidly.

The broader base of debt has made growth in borrowing harder to achieve. At the current deceleration pace of 0.9% in the past year, it would take about 6 years for the borrowing to start shrinking. The tipping point for this bubble is students deciding not to go to school because the price is too high. The hope is an alternate means of getting on the first rung of the professional job ladder emerges so young adults don’t start off in a big financial hole after going to college.

The situation keeps getting worse for young people as tuition costs grow faster than inflation. There needs to be a private sector solution to this problem as it will only get worse if left unfixed. Technology needs to be utilized to streamline the education process to cut costs and the time to get a degree. Unfortunately, colleges are actually incentivized to keep students longer than 4 years as it’s the equivalent of retaining their paying customers longer. In 1989, median net worth for 25-34 year old Americans in 2016 dollars was $25,786, while the net worth in 2016 was only $12,000. This delays moving out of parents’ homes, buying a house, and forming a family.

This is part one of a multi-part interview with Anurag Sharma, author of a new book on value investing, Book of Value: The Fine Art of Investing Wisely. The... Read More

Aswath Damodaran: Fair Value For Amazon Is $200 Per Share

HOTCHKIS & WILEY HIGH YIELD – Five Years: A Reflection: A Collection of Past Newsletter