Recession In 2020 Is Consensus – ValueWalk Premium 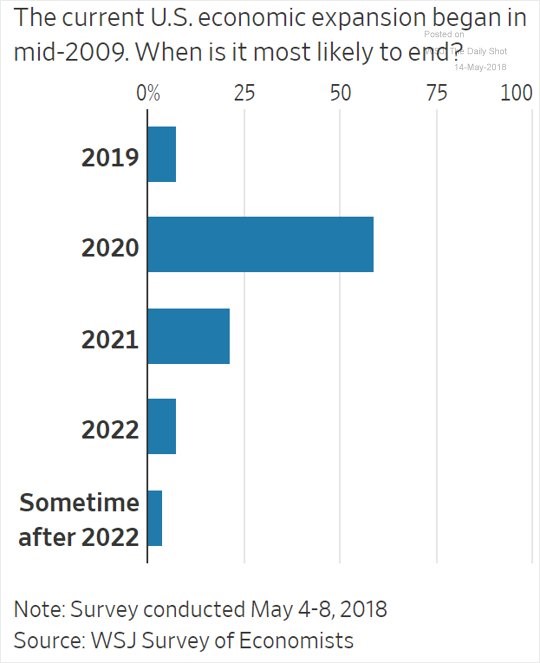 In a previous article we showed that Guggenheim expects a recession in the 2nd half of 2019. Wall Street has the stigma that everything is always bullish, or as some managers say, “it’s always a good time to invest”, in order to receive more capital to manage even though they might be bearish. There will always be some charlatans in finance, but clearly there are some firms willing to make what appear to be objective calls. If there was ever a time to call for a recession, now is it since the yield curve is flattening and in one year this will be the longest expansion since 1854. The willingness to call for a recession depends on the analysis and whether being right is rewarded. It may seem like an obvious expectation that professionals get paid to be right, but incentives aren’t always aligned correctly.

Because of recency bias investors tend to expect business cycles to last about 7 years. It’s intellectually difficult to understand that rare events which haven’t occurred in your lifetime, will happen. Since no one is alive from the 1850s, this cycle is an example of one of those. There have been many examples of periods in this expansion where many were calling for it to end.

The chart below shows the current consensus among economists is for a recession in 2020.

The thesis is very simple. The yield curve is expected to invert in about 6 months; then the curve will stay near the flat line for about a year before it starts steepening which signals a recession is here as the Fed’s rate cuts push the near term bond yields lower. The analysis for a recession prediction in over 18 months doesn’t have much to it because there aren’t economic data points to go by and long term trends such as demographics can’t time recessions. There are many factors behind the boom and bust of economic cycles, with demographics playing a key role, but what we are implying is that looking at any one factor in isolation will not provide you with a great tool for timing the recessionary change in the cycle. A tool or indicator that has worked well in the past, doesn’t mean it will work in the future. When evaluating economics it is necessary to examine all variables.

The volatility in the U.S. equity market in February along with the weakness in the European economy and emerging markets has killed the ‘global synchronized growth’ thesis. We were early to review the end of this thesis a few months ago. The thesis has played out; the more it was repeated in the financial press, the closer it was to ending. There were even forecasts for there to be the lowest number of countries in a recession ever in 2018. When you have predictions like that, there’s not much room for upside because the estimates can’t be beat. Therefore, it’s good news for stocks for expectations to be lowered. U.S. stocks had one of their best risk adjusted returns ever in 2017, so it was clearly being priced in.

To be clear, the process of lowering expectations could be painful for investors, but now that it’s over, there’s room for estimates to be beat again. As you can see from the chart below, the percentage of fund mangers who think real economic growth will be stronger in the next 12 months is about the same as the percentage who think it will be weaker. 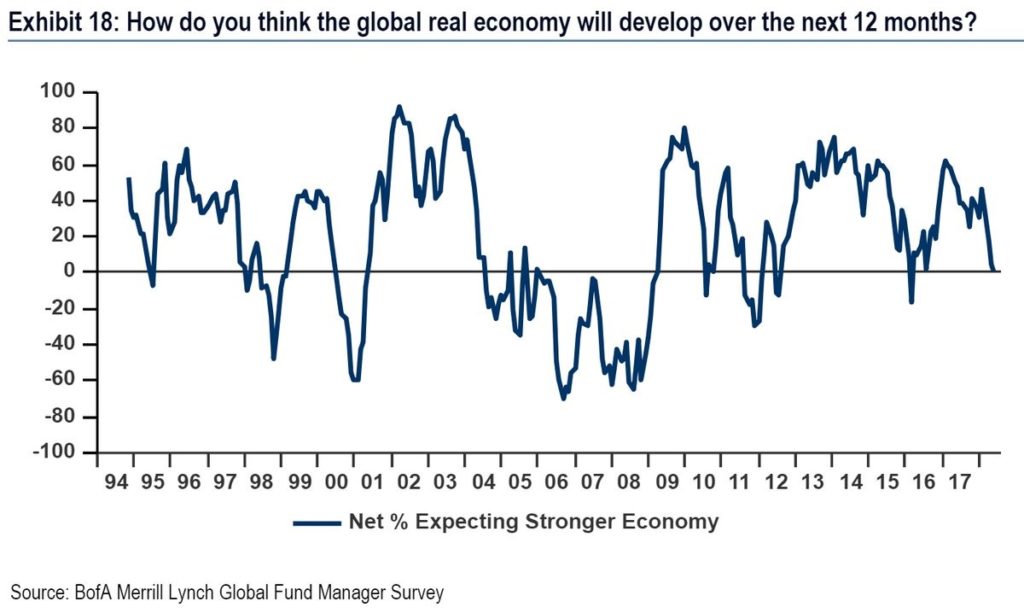 That’s a markedly different sentiment reading than in 2017, where most thought economic growth would be stronger. At the end of the strengthening period, most fund managers were proven wrong as global growth slowed in Q1.

Recession? Growth Could Be Coming

The economic growth prospects in emerging markets and Europe are currently much grimmer than America. The growth in America is actually expected to improve rapidly. This provides an interesting bifurcation between the 2018 economy and what could be coming in 2019 or 2020. The yield curve is coming close to providing a warning signal in the form of inversion, but there’s little to no evidence of a recession coming anytime soon. The choice is between worrying about how the economy will do in 2020 or trusting what we are currently seeing in the data. Even the Q1 growth of 2.3% isn’t close to a recession. An improvement on that is heading in the opposite direction of a recession.

As you can see in the chart below, the advance in real retail and food services sales were up 2.2% in April.

Year over year retail sales were up 4.7% and the control group had 0.4% growth month over month. These results aren’t consistent with a coming recession. The red arrows below show the stabilization of real retail and food services sales before recessions, while the black arrow shows the growth is still steady currently. Those indicators were prescient over a year before the past two recessions; the current consistent growth implies a recession is not coming in the next year or two.

There are scary charts which show the yield curve implying a recession in 2019 or 2020. The great thing about investing in 2018 is you don’t need to predict what will occur in 2020. Growth can accelerate now and decelerate later. The forecasts for 2020 are very much up in the air, so it’s a mistake to start investing based on uncertainty in estimates two years away from now, since the yield curve hasn’t inverted yet. Being too early is the same as being wrong. You want to be one step ahead of markets, not two in order to be profitable. One way of looking at this scenario is that we don’t even know what Q1 2018 GDP growth was, let alone have much to go on for a forecast over a year from now. The Q1 2018 GDP report is still subject to revisions which could make the quarter look terrible or decent.

With this understanding in mind, let’s review Q2 GDP growth estimates. Unlike the neutral global growth estimates, economists are very bullish on Q2 in America. As you can see from the chart below, the Atlanta Fed expects 4.1% growth and the blue chip expects 3.2% growth. 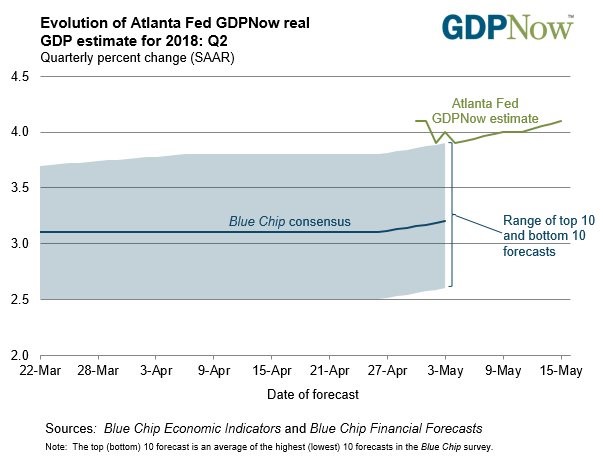 According to the CNBC average of estimates, economists expect 3.6% growth. These estimates are based on mostly soft data reports for May, but it’s worth noting where the estimates line up. To be clear, just because the estimates are high, doesn’t mean stocks will fall if they are missed. We think they aren’t priced in because the S&P 500’s earnings multiple hasn’t expanded much ever since this optimism became the consensus. Growth accelerating would be great news for equities as the US would be moving in the opposite direction of Europe with help from the spending stimulus, tax cuts, and regulatory reform. This point is similar to how if there is a recession 2020, stocks will fall in that year even though it’s the consensus now.

We are not making the prediction that GDP growth will be 4% or higher in Q2. There’s no need to stick your neck out that far. If economic growth accelerates in Q2, we’ll have the perfect storm of bullish catalysts for stocks as earnings growth has beaten estimates. The biggest black swan which could derail equities is geopolitical turmoil. 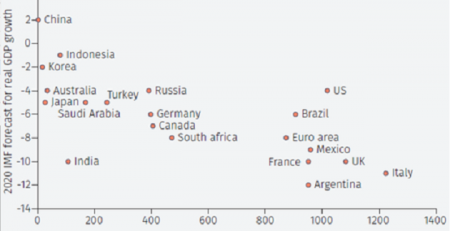 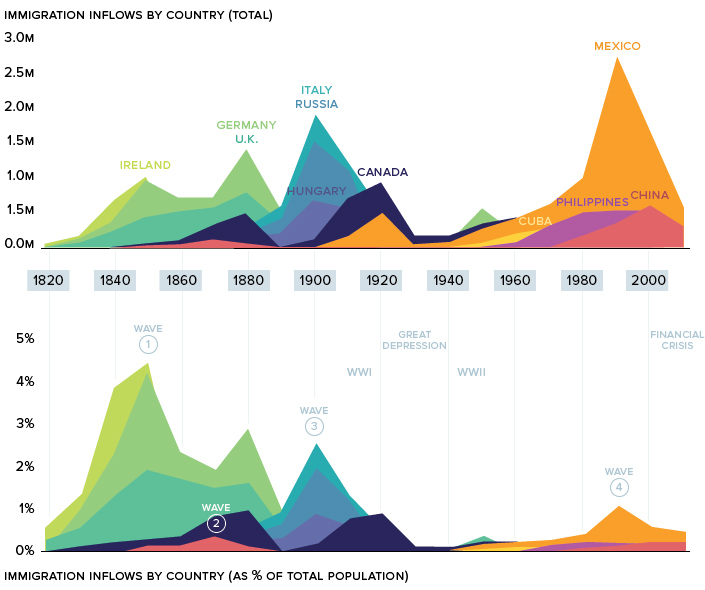 America is a nation of immigrants, and though the country has seen a lot of new arrivals over the past two centuries, the rate of immigration has been far... Read More 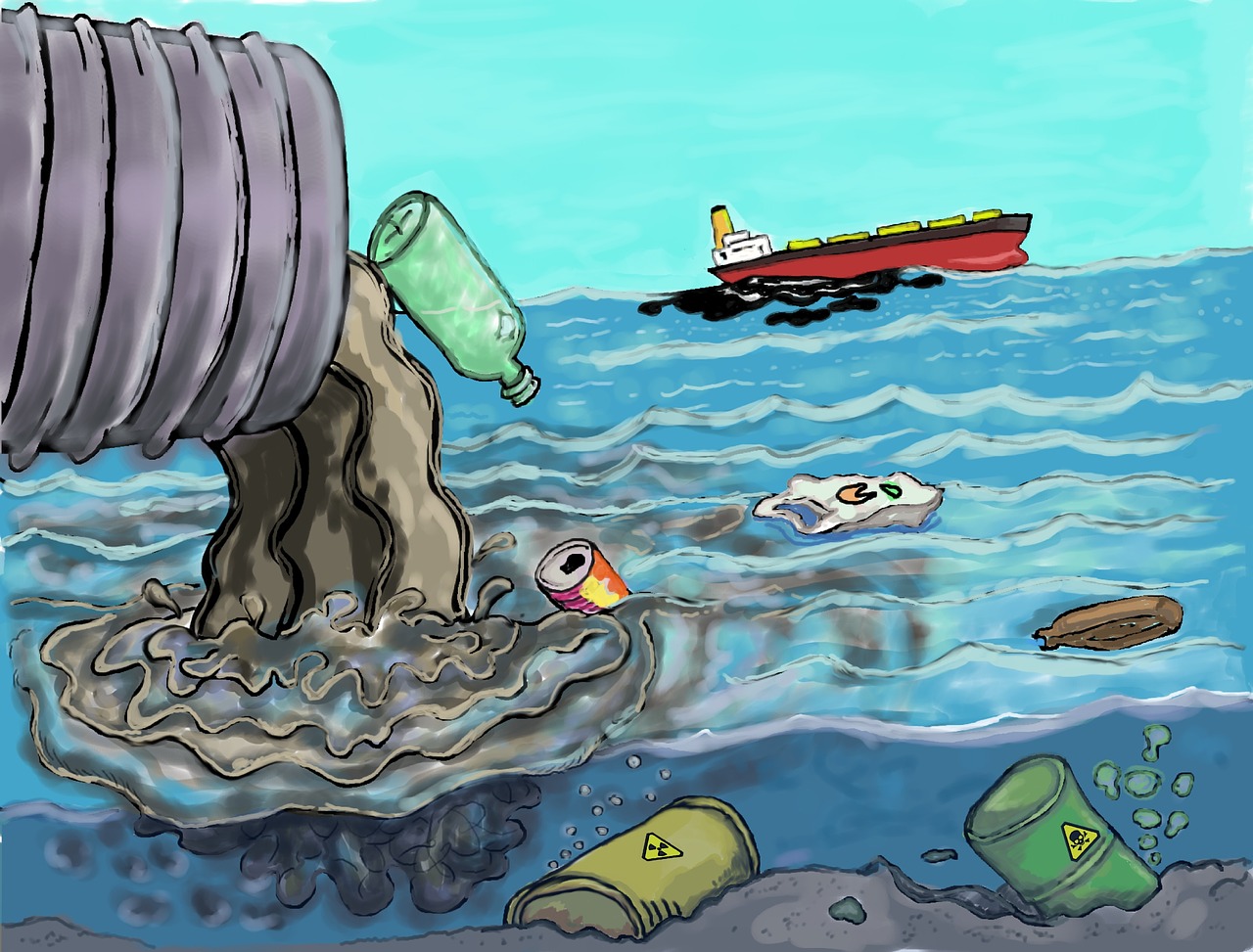 The United States media has been awash with debates about civility in recent months after a number of officials in Donald Trump’s administration have been heckled and shamed in... Read More

Investors may have added $1.69 billion to hedge funds in February but face a rough road in 2019 with net inflows still in the negative YTD for 2019, according... Read More 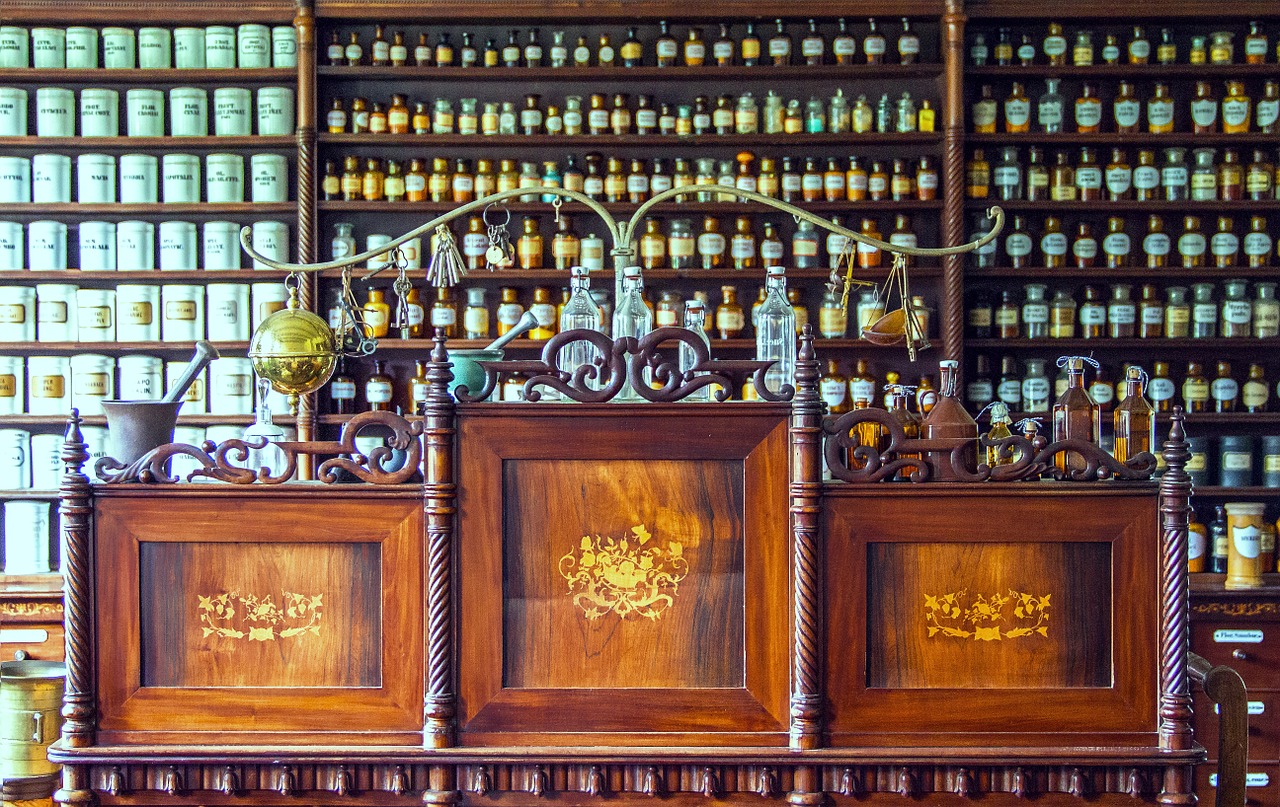 John Arnold is legendary for turning contrarian bets into heaps of money. The soft-spoken Texan was a whiz kid trader at Enron before its fall. He then ran his... Read More 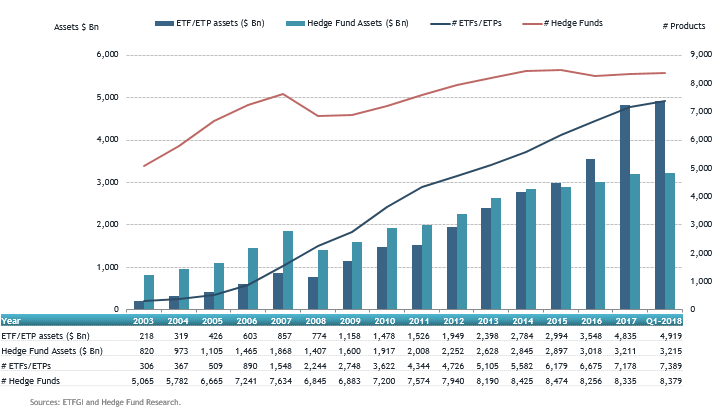 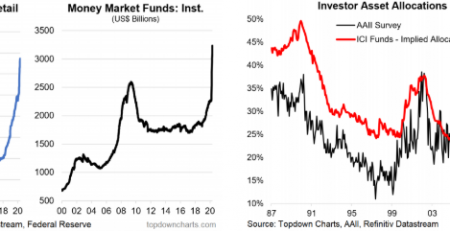 Chart Of The Week – Quarantined Cash

Stocks have been on fire from the March 23 low, climbing 30%+ and seemingly defying most fundamental logic. There have been minor pullbacks along the way, but for the... Read More 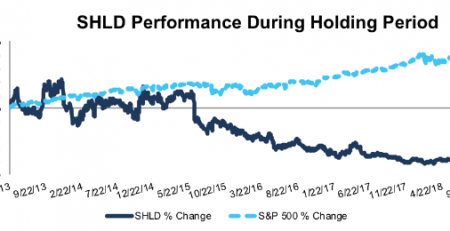