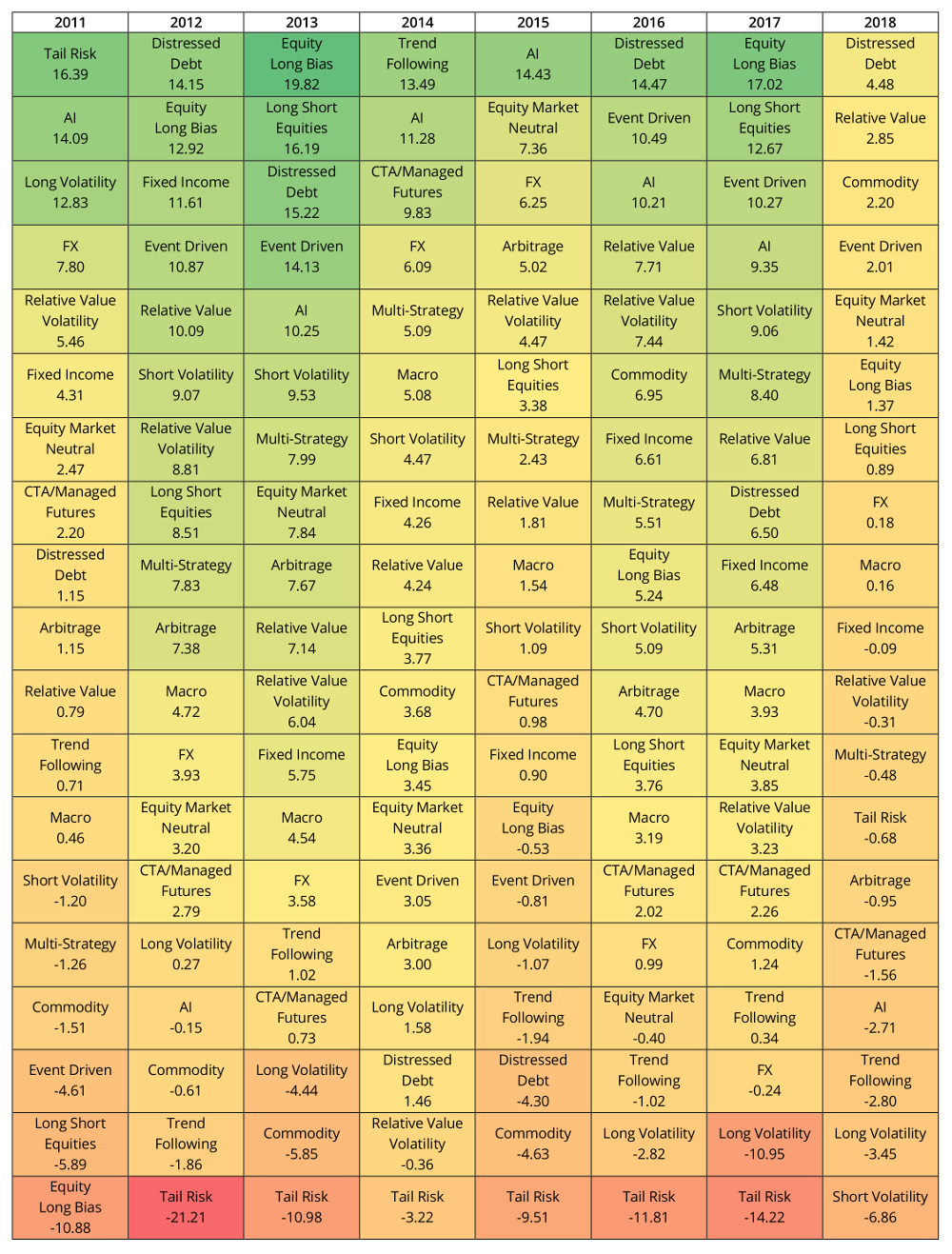 Hedge fund managers ended May in the green, with the Eurekahedge Hedge Fund Index up 0.18% over the month, trailing behind the 0.84% gain posted by the MSCI AC World Index over the same period. Concerns over the US-China trade spat have somewhat diminished, with both sides calling a truce. China offered to increase imports of US goods to reduce the trade imbalance between the two countries, and cut down import duties on passenger vehicles, which have previously been touted as ‘unfair’ by the US president. Meanwhile, Trump is scheduled to meet with North Korea’s leader in Singapore to discuss a potential denuclearisation deal for the country. The success of the summit scheduled to take place on 12 June 2018 may prevent further escalation of geopolitical tension around the Korean peninsula and provide a much needed relief for global markets. Developed markets continued to outperform their emerging market counterparts in May, as Asian and Latin American countries came under the pressure on account of geopolitical concerns and strong greenback as indicated by the US dollar index’s 2.34% gain over the month. Global economic outlook remains positive, supported by the recovery in investment and global trade growths, as well as supportive fiscal policies. However, rising interest rates might pose risks for countries and corporations with high debt levels. It also remains to be seen how the US-China trade war would resolve once the ceasefire is called off.

Roughly 54% of the underlying constituents of the Eurekahedge Hedge Fund Index were in the positive territory by end-May, with event driven fund managers leading the pack, gaining 1.69%. Among regional mandates, managers with exposure toward Eastern Europe & Russia and Latin America posted the gravest losses, with both indices declining more than 4% over the month. On the other end of the spectrum, North American fund managers gained 1.14% in May, pushing their year-to-date returns to 0.84%.

Below are the key highlights for the month of May 2018:

Across geographic mandates, performance was a mixed bag with North American hedge funds in the lead, returning 1.14% in May, bringing their year-to-date returns back to positive territory after spending three consecutive months underwater. American equity markets showed solid performance over the month with major indices posting positive gains, as concerns over potential trade war with China started to dwindle. Nearing the end of the month, both the US and North Korea confirmed that the Trump-Kim summit will indeed take place, after various spat between the two parties, which almost ended in the withdrawal of the US from the summit. European fund managers generated meagre but still positive return of 0.17% in May, as the resurgence of political risks in Italy whittled down the gains made by managers over the month.

Fund managers focusing on emerging markets, especially Eastern Europe and Latin America posted the steepest losses over the month, with the Eurekahedge Eastern Europe & Russia Hedge Fund Index down 4.36% and the Eurekahedge Latin American Hedge Fund Index down 4.14%. Fund managers with high exposure to Russia suffered losses due to the trend reversal in the equity market's recovery after the significant decline back in April. The signal of recovery in early May prompted fund managers to go into long positions, only to discover that not only did the rally stall, but also that large cap equities underperformed the benchmark index, exacerbating the losses. Over in Latin America, the strength of the US dollar put significant downforce on Mexican and Brazilian managers. On top of that, Mexican equities came under pressure as NAFTA renegotiation stalled, while Brazil's economy was paralysed for nearly two weeks thanks to the countrywide trucker strike over diesel price. These challenges wiped a significant portion of the gains made by Latin American fund managers over the first four months of 2018, and allowed Asia ex-Japan managers to top the regional mandate table on a year-to-date basis with their 1.06% return.

Looking at strategic mandates, event driven hedge fund managers lead the pack with their 1.69% gain over the month of May, supported by the M&A activities in the banking sector, as major organisations such as the ECB and the IMF began urging consolidation, contrary to how they have historically positioned themselves on M&A among large banks. Major performance contributors to event driven hedge funds in May include the spin-off of Altice USA from the Netherlands based parent company, as well as the potential acquisition of NXPI by Qualcomm. Relative value hedge funds gained 0.53% in May, with three of the four underlying volatility strategies posting positive gains over the month, as the CBOE VIX Index dropped to levels last seen before the spike in early February this year. The CBOE Eurekahedge Relative Value Volatility Index gained 1.55% in May, outperforming its volatility index peers.

CTA/managed futures hedge funds lost 0.08% over the month, despite the strong performance of its underlying sub-strategies. The Eurekahedge Commodity Hedge Fund Index gained 0.99% in May, supported by rising industrial metal prices, especially nickel, as indicated by the S&P GSCI Nickel Index's 11.52% over the month. On the other hand, the Eurekahedge FX Hedge Fund Index gained 0.54%, with strong US dollar being the major theme again. Long US dollar positions against Turkish lira, Brazilian real, as well as Mexican peso were among key contributors to performance for FX fund managers. Meanwhile, fixed income hedge fund managers ranked last among the major strategic mandates, losing 0.79% in May as the Italian president Sergio Mattarella's decision to veto the new coalition's proposal for finance minister triggered a BTP selloff due to investors fleeing to safer German and US treasuries. The 10-year US treasury yield slid back to around the 2.8% mark by the end of May.

On a year-to-date basis, distressed debt hedge funds maintained their position at the top with their 4.48% return, owing to the gains made earlier this year from their exposure to Puerto Rican debts. On the other end of the spectrum, CTA/managed futures are still down 1.56% as of May 2018 year-to-date, as fund managers utilising this strategy are still unable to recover the losses incurred in the volatile month of February this year. Fund managers trading crypto-currency assets are still down 22.71%, as the prices of major coins failed to recover to their pre-2018 levels. Bitcoin price has fallen 45.98% as of May 2018 year-to-date. 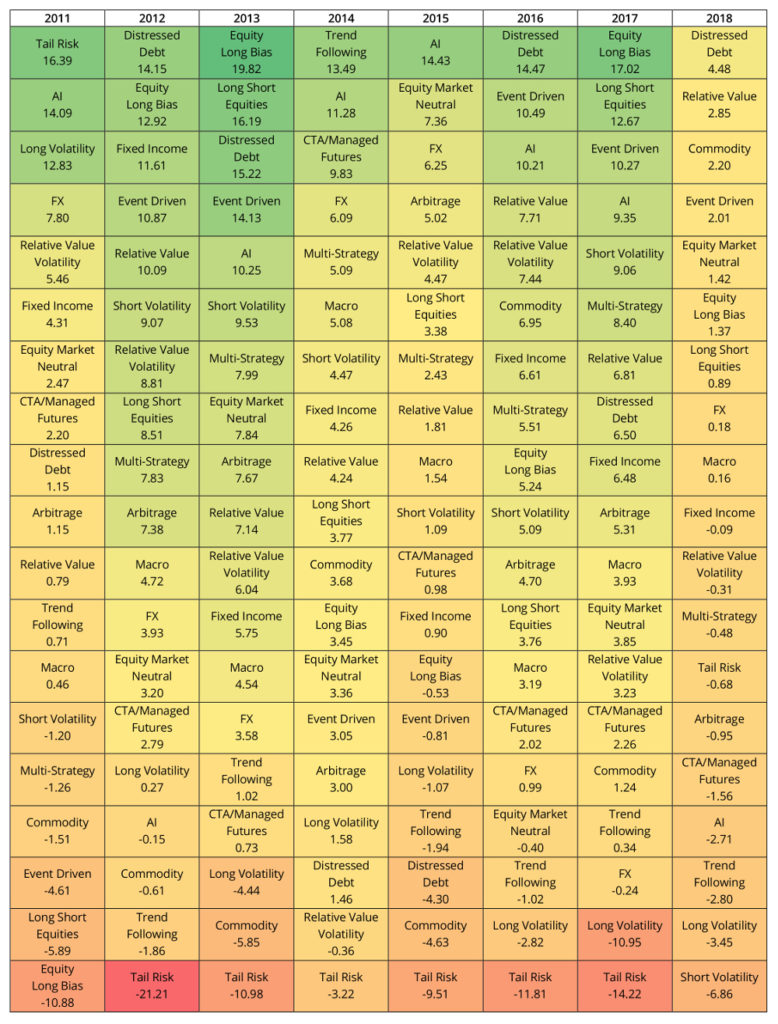 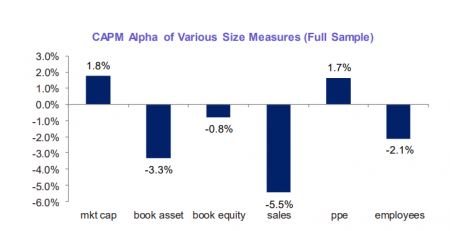 One of the oldest and most persuasive arguments in the stock market is that small stocks outperform large stocks.(1) Warren Buffett, speaking at the 2013 Berkshire Hathaway Annual Meeting,... read more

BlueMountain Capital investment research for the month of June 2018, titled, "Procyclicality And Its Extremes." Get The Timeless Reading eBook in PDF Get the entire 10-part series on Timeless Reading in... read more 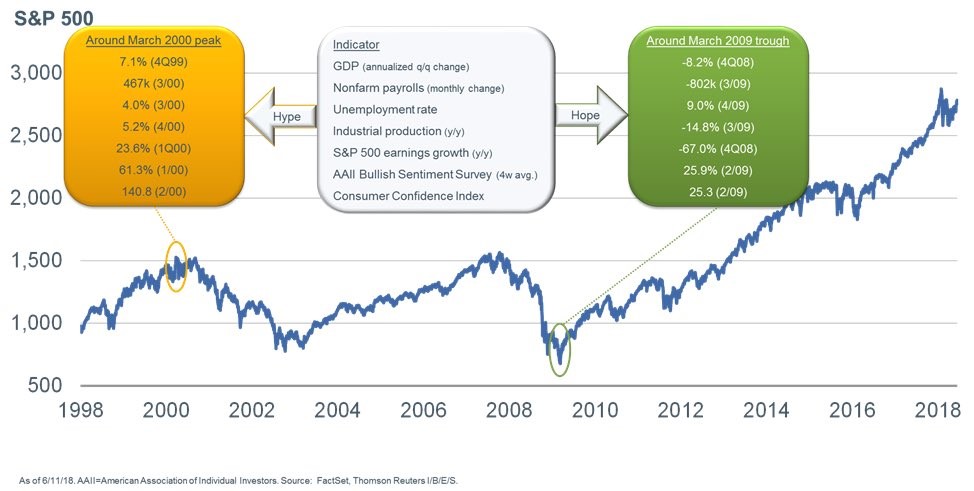 Avoid Investing Based On False Premises

Surprisingly, there are popular bearish narratives even as the stock market is a few percentage points away from its all-time high and the economy is in one of the... read more

Sortino Ratio vs Sharpe Ratio vs Sterling Ratio vs MAR Ratio vs How Do I Calculate This Ratio...yikes. Managed futures certainly has perfected the art of having a language... read more 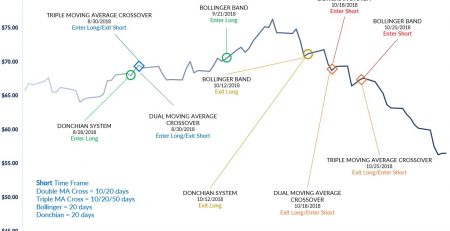 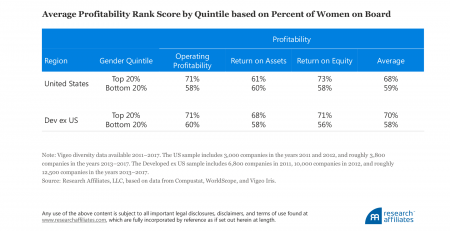 Key Points Both academic research and our own experience indicate that the business case for corporate diversity is compelling as a result of higher collective intelligence. Testing the investment... read more