The Rich Are Fleeing China, India And Turkey – ValueWalk Premium

Most rich people are good at making money. And in order to stay rich, they also need to be good at keeping their money.

So where rich people are moving to – and away from – says a lot about places in the world that are safe (and not safe) for money.

You see, rich people – a group that overlaps heavily with the so-called “smart money” – are often among the first to get out of a market, or an economy, before it falls. They see economic and political problems earlier than most other people – because of their networks, their jobs, and their connections – and move their money someplace safer before bad things happen. And then, if things look really bad, they move themselves and their families elsewhere.

Meanwhile, non-rich people – the 99 percent that doesn’t have the insight, nor the means, to abandon the ship of a sinking country or market – suffer when the problems that the rich people predict wind up happening.

Rich people are leaving these countries

Research group New World Wealth tracks the wealth and the movements of high-net worth individuals (HNWIs) – people who have investable assets of more than US$1 million, excluding primary residence and collectibles – around the world.

As shown below, China, India and Turkey saw the largest number of HNWIs leaving last year. The United Kingdom, France and Russia were also towards the top of the list.

On the face of it, hemorrhaging millionaires is a bad sign for these countries. As I mentioned above, rich people may see the writing on the wall – and want to get out. Or they may be reacting to bad, or deteriorating, business conditions.

For example, the flight of HNWIs from India could in part be a reaction to by growing concerns about an ongoing anticorruption drive and “tax terrorism” – the expanding authority of tax officials to target the rich.

And in Turkey, for instance, an increasingly authoritarian leader – who is also a macroeconomic illiterate – is taking a wrecking ball to the economy. Meanwhile, China’s position at the top of the list could suggest that its prospects are less rosy than we think.

However… remember, this list shows only net outflows of rich people – not net HNWI creation and destruction. Just because HNWIs are leaving town doesn’t mean that there are fewer of them from one year to the next.

According to global bank UBS, there’s a new billionaire in China every three weeks. And three-quarters of the world’s new billionaires come from China and India. So even if there is a net outflow, it doesn’t mean that the number of rich people in these countries is declining – not at all.

And also… money isn’t everything. Sometimes people leave one place and go to another because they’re looking for a higher quality of living – one that money simply can’t buy at home. Rich people who want to get places are stuck in the same traffic jams in Beijing and Moscow as the less-rich. And the wealthy are more likely to get robbed since, well, they’re rich. And of course, China’s pollution, India’s overwhelming masses… these are perfectly good reasons to leave for somewhere else.

Where rich people are going

The destinations of departing HNWIs seems to bear this out. Those leaving China went mostly to the U.S., Canada and Australia… while HNWIs in India left for the U.S., United Arab Emirates (UAE), Canada, Australia and New Zealand. And HNWIs from Turkey left for elsewhere in Europe and the UAE.

All of these destinations offer significant lifestyle upgrades. (As we said here, HNWIs are leaving China for places like the U.S. and Canada in search of clean air and water, safe food, transparent rule-of-law and an open-minded education.)

As shown in the table below, last year the most HNWIs migrated to Australia, the U.S., and Canada. To varying degrees, these are countries with healthy economies, (relatively) low(er) crime rates, good schools (at least for people with money), and business opportunities. 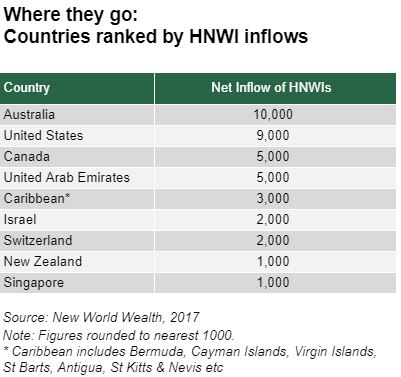 New World Wealth hypothesises that Australia took the top spot because it’s viewed as a better base for doing business in emerging Asian countries; is considered one of the safest countries in the world; has lower inheritance taxes than the U.S.; and getting health insurance is easier than it is in the U.S.

For whatever the reasons… it pays to follow the money.

Here is a list of the 'best books' from Jason Zweig of the Wall Street Journal. Zweig highlights his 'top' books for investors highlighting best value investing books for holidays, books include Against the Gods:... Read More

Japan Brings Global Macro Hedge Funds Back In The Game

The global macro strategy saw a rare rise in November, as their favorite trade rose once again. With the weakening of the Japanese yen, which fell 4% against the... Read More