Why Trade Deficits Are Not Necessarily a Bad Thing – ValueWalk Premium 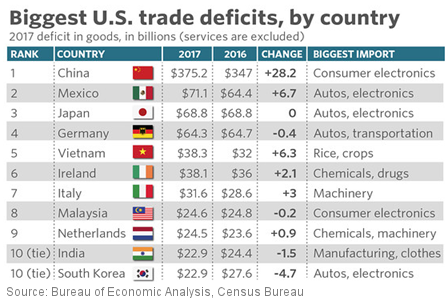 1. Why Trade Deficits Are Not Always a Bad Thing

3. Why the US Dollar is Rising & Can It Continue?

The fact is, most high-consuming developed nations run trade deficits with other countries.  The US has the highest trade deficit in the world, and this has been true every year for decades. There are specific reasons for this, as I will explain below, and it’s not necessarily a bad thing. In some ways, it’s a good thing.

Following that discussion, we’ll take a look at why the US dollar has been rising of late, despite the widespread consensus that the greenback will continue to move lower and lower. Markets often don’t conform to the consensus view, and the latest rally in the dollar is one such example.

Why Trade Deficits Are Not Always a Bad Thing

The Trump administration and officials from Canada and Mexico continue meetings to renegotiate the North American Free Trade Agreement (NAFTA). There is much about the trade agreement that should be modernized, such as updated rules for e-commerce and stronger intellectual property protections. The president also hopes to maintain existing duty-free market access for agricultural goods, as it is important for industries in many states, including my home state of Texas.

However, the administration has also emphasized its desire to reduce the trade deficits – the degree to which the United States imports more than it exports – in the NAFTA negotiations. This is rooted in the belief that when the United States buys more from foreign countries than they buy from us, jobs increase in those countries and decrease here at home.

This is a faulty assumption but one that has unfortunately found its way into modern political dialogue and the mainstream media. Yet trade deficits are not always bad for US workers and consumers, and they should not remain the focus in NAFTA renegotiations. Here’s why.

For starters, a powerful economy such as ours often runs a trade deficit because of the immense buying power of its people. Mexico’s average net per-capita income is roughly $13,000 per family, while the average US household brings in more than $59,000 each year, according to the Census Bureau.

Thus, Americans have a far greater capacity to buy goods than do consumers in Mexico and Canada. It should come as no surprise that we do exactly that. In 2017, our trade deficit with Mexico was apprx. $71 billion, according to the Census Bureau (see chart below). Our trade deficit with Canada was $17.5 billion last year.

If the United States and Mexico were the only countries in the world, and both countries traded openly with each other, American consumers would still benefit from Mexican imports in order to satisfy our buying power and immense market demand.

Conversely, Mexico would still import goods from the United States. Its citizens, however, simply cannot afford to buy things at the same rate and quantity that Americans do from Mexico. The same is true with Canada.

If Mexicans suddenly became wealthier, they would likely start buying more US products. That is why one of the best things that can happen to our economy is for other nations’ economies to grow. When they grow, they buy more American products, and we grow even more.

And while US consumers and businesses are buying more cheap goods from Mexico, it gives us greater purchasing power to buy more things and reinvest in our own economy, thus lifting our standard of living. Simply put, free and fair trade is a win-win scenario.

Foreign investment also tilts the trade-balance calculation. Because we have the world’s largest economy and the strongest currency, more money comes into the United States than goes out. This investment surplus adds to our trade deficit, even though this foreign cash stimulus is a positive for our economy.

When a Canadian company decides to invest in a US-based company, that also increases our trade deficit. Similarly, when the Mexican government buys US Treasury bonds (as most of the world does), the likelihood of an American trade deficit increases. Yet investments such as these are indicative of a strong economy.

It should be an encouraging sign that we are by far the world’s largest receiver of foreign direct investment. Our trade deficit means, in part, that US companies are considered to be a better investment than companies in other countries. More investment in American businesses means more jobs and higher wages for American workers.

It is my hope that as the Trump administration continues reviewing past and future trade agreements, we can work together toward building a better future for the American middle class. We have real problems with trade, such as closed markets, foreign subsidies and stolen intellectual property.

But setting up additional barriers and taxes on imports to reduce the trade deficit should not be the focus of our trade policy. The United States already benefits from trade and, when there is free and open competition, American workers and consumers always win.

It is also my hope that President Trump comes to understand that trade deficits are not always a bad thing and should not be the driver of the NAFTA renegotiations.

Why the US Dollar is Rising & Can It Continue?

Despite a strong consensus that the US dollar will continue to move lower this year, the greenback has rallied strongly in recent weeks. While it’s still too early to say the downtrend is over, investors and currency traders are wondering if something significant has changed.

The latest strength in the dollar is likely the result of several factors. First, US interest rates have risen this year and remain well above rates in Europe and Japan. This has resulted in more international capital flowing into the US dollar.

Second, the Fed appears firm in its plans to increase short-term rates at least two more times this year and continue to reduce its massive balance sheet at an increasing rate this year and next and possibly beyond. There is increasing speculation that the FOMC could raise the Fed Funds rate three more times this year, especially if the economy reaches 3% growth in the current quarter. Higher rates are good for the dollar.

Third, data on US dollar futures markets around the world show there is a very large speculative “short” position in the dollar. This is not surprising given the global consensus that the US dollar would move lower this year and perhaps beyond. So, it’s no surprise that speculators would have large short dollar positions.

As the dollar has strengthened recently, some of these shorts have elected to cover their positions. To exit a short position means you have to buy the dollar to liquidate the trade. This buying helps push the greenback higher and could result in a lot more short-covering which has the potential to push the dollar even higher still.

As I said at the beginning of this section, it is too early to conclude that the downtrend in the US dollar has reversed. Yet for the reasons cited above, the current rally in the dollar could continue. And if the holders of the shorts decide to exit their positions in a big way, the rally could be a lot larger than most traders currently expect. Stay tuned.

Today at 3:00 Central Time we will be presenting a live webinar with Jay Pestrichelli, the Co-Founder and Managing Director of ZEGA Financial. Register today for this great opportunity for you to hear directly from Jay about their ZEGA Buffered Index Growth (ZBIG) Strategy. It is designed to provide upside exposure to the markets when they are going up, while also using a “buffered zone” to help protect you if the markets drop.

You really don’t want to miss the opportunity to hear from Jay about this strategy that you probably won’t find from your typical financial advisor – one that gives you the potential to participate in the market gains, while limiting your downside risks. You can even ask Jay your questions about ZBIG at the end of the presentation.

Even if you can’t make the live webinar, be sure to sign up. If you do, we’ll send you a link to a recorded version of the webinar that you can watch at your convenience. You can also call us at 800-348-3601 if you want to learn more about ZBIG.

Why the US Has the World’s Largest Trade Deficit

US Trade Deficits Are Not Always Bad

US Dollar is Making a Big Comeback 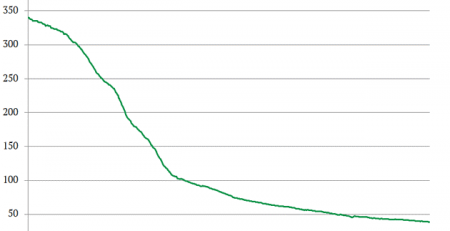 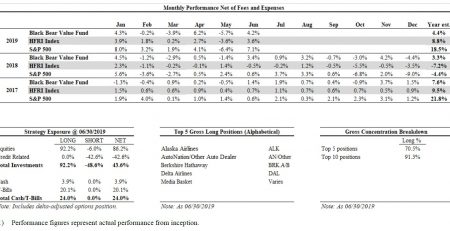 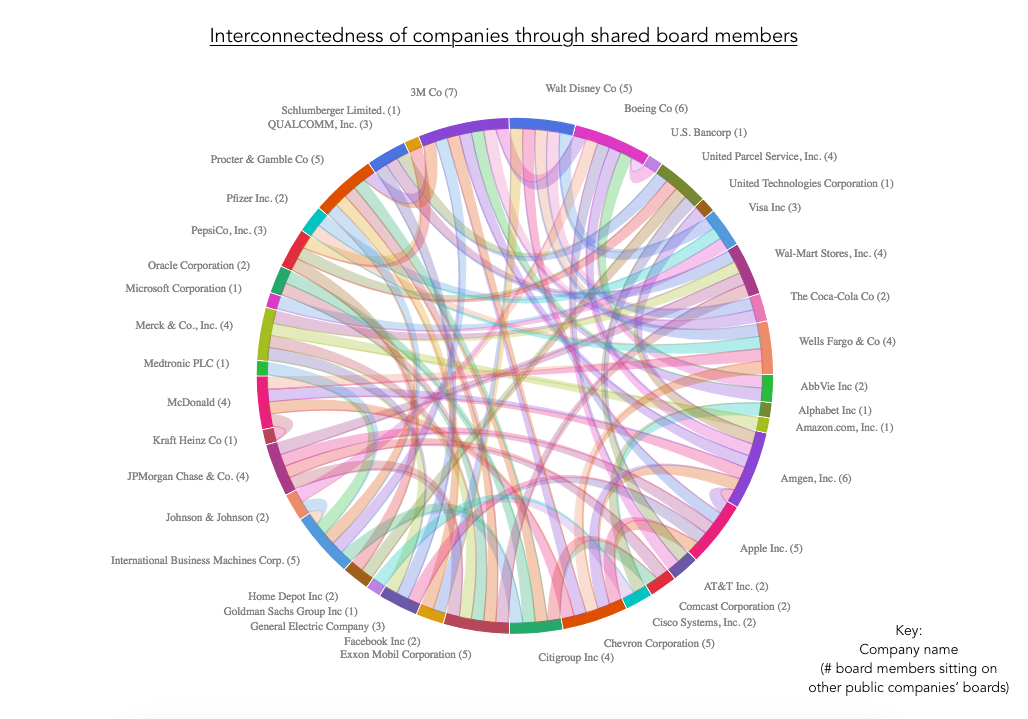 For any corporation, the Board of Directors plays a crucial role in corporate governance. Get The Timeless Reading eBook in PDF Get the entire 10-part series on Timeless Reading in PDF.... Read More

Here’s a great recent interview with Mohnish Pabrai and the folks at ET. During the interview Pabrai provided a number of valuable insights on his value investing approach. Here... Read More 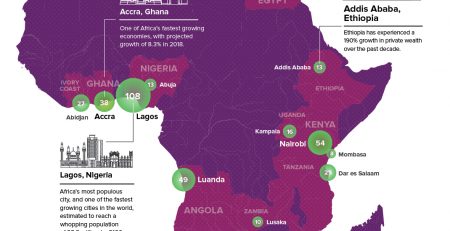 The economy in Africa is on the rise, and financial hubs are beginning to emerge. [REITs] Q2 hedge fund letters, conference, scoops etc While the resource-rich African continent has seen only 13%... Read More 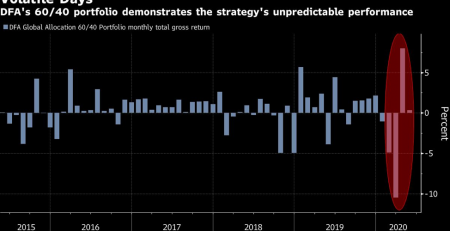 Global hedge fund flows were positive in July, with investors adding an estimated $5.85 billion to funds around the world and bringing overall industry AUM to $3.307 trillion, according... Read More

Ken Fisher, founder of Fisher Investments, wrote a great article in USA Today which illustrates the importance of spending time in the market as opposed to trying to time... Read More