TAL's reaction to our 70-page exposé is stunning and affirming. Its response, which could have been typed out while sitting on the toilet, has wholly failed to address our conclusions that a) its reported profits are fraudulently inflated, b) it engaged in two sets of non-substantive transactions, including having reported a divestment that did not actually occur, c) it likely diverted funds through a straw party, and d) is covering up a more substantial compression of its core business operating margins. The failure to respond in our view evidences utter contempt for investors and the U.S. markets.

TAL’s directors claim to have carried out an investigation into the issues raised in our report within 12 days. Their statement is confined to only 51 words discussing the investigation.1 Given there has been no attempt to convince investors there was any investigation, it’s hard to even label this one a “sham”. Investors should be under no illusion that this statement is anything other than a long, fat middle finger extended their way. This behavior underscores our point that managements and directors in China see no disincentive to steal money from U.S. investors – it is a “heads I win, tails you lose” bet for them.

We began our series discussing two transactions where not only is the evidence of fraud is, in our view, clear and convincing; but, the impacts can be quantified. From the outside, fraud is usually difficult to quantify – even analysts who specialize in detecting fraud usually struggle to estimate its impact. Based on feedback, we believe there was some misunderstanding by investors about the impacts of the fraud we detailed in Part I. The fraudulent inflation was not limited to below-the-line (i.e., non-operating) income inflation. Deferred revenue without matching expenses is an above-the-line profit inflation technique, which we illustrate in a reported vs. estimated real margin comparison table on page 3 of the initial report.

We continue our series of reports with a look at another transaction with a quantifiable above-the-line impact, Firstleap.2 We focus on Firstleap second also because it is a bit of a brainteaser – we invite investors to try to reconcile to the numbers TAL reported. Taken together, Parts I and II show the variety of levers available to TAL to fraudulently inflate profits – all three transactions are obscure transactions to which investors seemed to pay scant attention at the time, and yet they have each made material contributions to profit overstatements.

Our next report in the series will detail our conclusion that TAL commits fraud in the financials for its core Peiyou business. The Peiyou fraud is more difficult to quantify, but our research suggests fraudulent overstatement of Peiyou revenue of approximately 25% to 30%. Future reports will detail fundamental weakness in Peiyou, and other reasons that the real portions of TAL’s profits are not sustainable.

Like Shunshun and Guangzhou One-on-One, Firstleap was one of TAL’s major investments in FY2016 and FY2017. Management claimed deferred revenue of $45.09 million at the time it acquired Firstleap, which is a tutoring institute for pupils ages 2-15. That number strikes us as steep. Join us as we use generous assumptions to see how close to $45 million we can get.

On January 22, 2016, TAL reported that it completed the acquisition of 100% of Firstleap. The purported purchase price of $46.58 million, paid for partially with TAL common stock, gave TAL a network of 66 learning centers, of which 30 were self-operated and 36 were franchised, as well as $20.94 million in cash.3

Picking over TAL’s blogs shows tuition is Rmb 15,000 for 8 months, with payment due at enrollment.4 The schedule is rolling, so students can enroll any time.5 On the Q2 call, CFO Rong Luo noted that total enrollment as of the end of August 2015 was “around” 20,000 students, while trailing twelve-month revenue was $30 million.6 Let’s say Firstleap had 21,000 students—again, we’re just giving TAL the benefit of the doubt.

We also have Firstleap’s onshore historical revenues, expenses, and gross profit. Much of the financials for Firstleap’s network of learning centers flowed through the Beijing VIE, Beijing Lebai Educational Consulting Co., Ltd (BJ Lebai), and we show these in the table below.

Next, we need to make some estimates to obtain a reasonable deferred revenue number for Firstleap. As in the table above, from CY2014 to CY2015, Firstleap’s gross revenue grew 52.8%, while TAL’s filings show total revenue growth of 42.9% in FY2016.7 Therefore, it seems more than fair to TAL to assume 60% run-rate enrollment growth for Firstleap in August 2015.8 If we increment enrollment by 4% every month—a CAGR of 60.1%—we get 25,265 Firstleap students as of January 22, 2016. 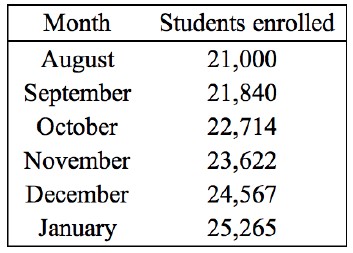 If Firstleap collected tuition of roughly 15,000 Rmb from each of the 25,265 students enrolled, that means it received prepayments of 379 million Rmb, or about $58 million, from those students. Let’s recap what we have so far:

However, out of the total prepayments collected, a significant chunk had already been amortized.9 To get at the percentage of deferred revenue remaining, let us look at eight generic monthly cohorts that have month-on-month enrollment growth of 4% and pay a fixed tuition.

We want to see what portion of the total tuition paid by these cohorts remains as deferred revenue. The tuition rate and starting student population do not matter, so we can choose round numbers.

As we can see above, out of the prepayments collected, only about 59% remain after a full student cycle. Applying that fraction to the 379 million Rmb in prepayments from before gets us to about 223 million Rmb of deferred revenue, or $34 million. Uh-oh: that is 25% below the $45 million TAL booked. But we’re not done yet.

There is a haircut we need to apply. It is a dry but important one—FASB section ASC 805. According to ASC 805, at the time of an acquisition, the acquired company’s deferred revenue is no longer recorded at the amortized value of the cash received.10 Instead, it is booked at fair value, which is equal to the acquirer’s future costs to fulfill the obligations, plus a reasonable margin that a third party might charge. For TAL, this would just be the marginal cost of delivering additional lessons; sales, marketing, G&A, and other expenses already incurred would be excluded. Let us use the Firstleap Beijing VIE financials from before to see what sort of a cost structure is reasonable. Gross costs, meaning cost of goods sold and sales tax, were 52% and 64% of revenue in 2015 and 2016, respectively. Let us assume that 60% of revenue was consumed by the marginal cost of service provision as of the acquisition date.11 After putting a reasonable margin of 10% on top, 70% of deferred revenue is matched to costs. In other words, that implies a mandatory 30% discount to pre-acquisition deferred revenue. We reproduce the figures and math below. 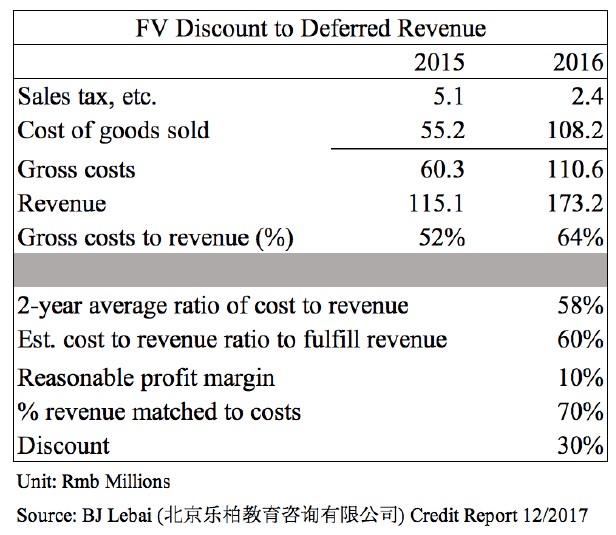 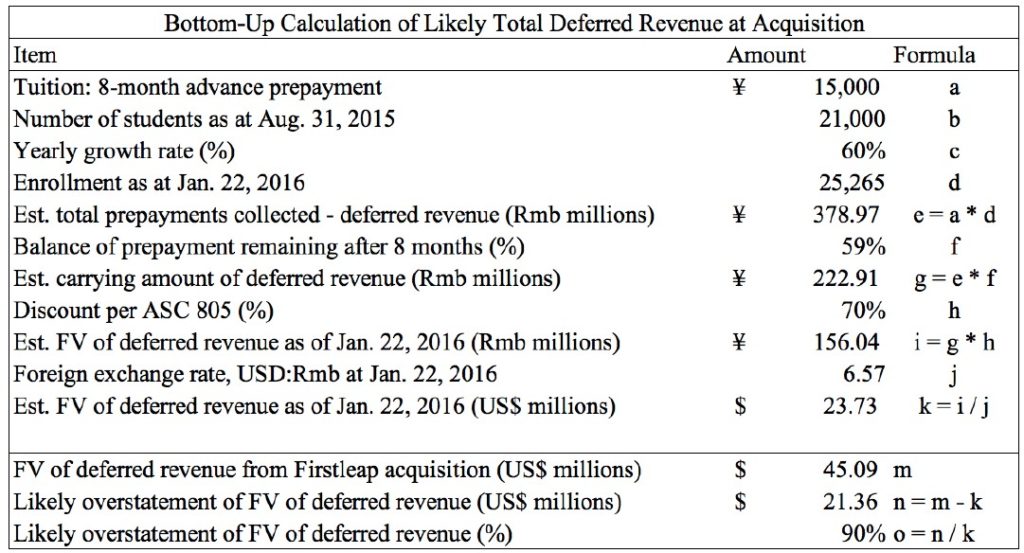 With the US dollar rocketing higher, a Bank of America Merrill Lynch report, with an eye on foreign credit investors, claims the “year-end could not have come at a... Read More

It is becoming a custom with Odey Asset Management to short and then go long on the same holding or vice versa. OEI MAC, one of the funds that... Read More