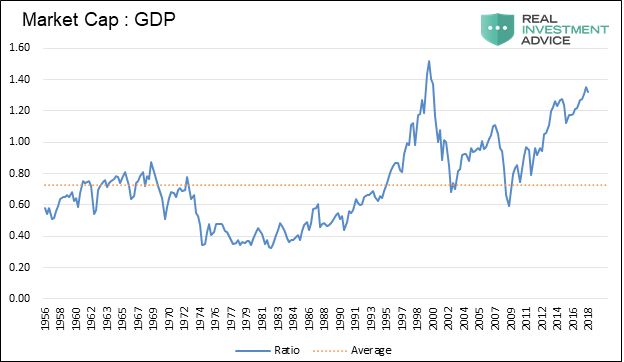 “I have ways of making money you know nothing about.” – John D. Rockefeller

Contradiction- A situation in which inherent factors, actions, or propositions are inconsistent or contrary to one another- Merriam-Webster’s Dictionary

Investors and the media can’t seem to get enough of Warren Buffett. They hang on his every word as if he was sent from the heavens offering divine words of wisdom. Unfortunately, Buffett is a mere mortal, and like the rest of us, he tends to promote ideals that benefit his self-interests over yours.

The purpose of this article is not to degrade Buffett, as we have a tremendous amount of respect for his success and knowledge. In this article we look at a few recent statements and actions of Buffett’s to highlight some contradictions that lie in their wake. Our conclusion is that it is far better for investors to watch what “The Oracle” does as an investor rather than hang on his words.

This article also serves as a reminder that the most successful investors think and act for themselves. These investors are not easily persuaded to take action from others, even from the best of the best.

Warren Buffett has, for a long time stated that corporate stock buybacks should only occur when the following two conditions are met:

“First, the company has available funds — cash plus sensible borrowing capacity — beyond the near-term needs of the business and, second, finds its stock selling in the market below its intrinsic value, conservatively calculated.”

The quote above was from nearly 20 years ago, however based on more recent quotes his thoughts about buybacks remain the same. The following comes from a recent CNBC article:

At the 2016 meeting, Buffett said that buyback plans were getting “a life of their own, and it’s gotten quite common to buy back stock at very high prices that really don’t do the shareholders any good at all.”

Buffett added: “You will not find a lot of press releases about buybacks that say a word about valuation,” but he clearly believes they should.

Knowing his opinion of buybacks, let’s explore his own firm, Berkshire Hathaway (BRK/A). It turns out BRK/A is now “seriously considering” buying back their own stock. Given their cash and cash equivalent hoard of over $320 billion, such an action would seem to fit right in line with Buffett’s first qualification noted above. Unfortunately, the stock is far from cheap and fails his second test. Currently BRK/A trades at a price to book value of 145% and at a price to earnings of 28 (28 is considered a very high multiple for a company that has consistently grown earnings at a 4% clip over the last 8 years). Altering the firm’s buyback policy would require relaxing or eliminating Buffet’s price-to-book value requirement of “below 120%”.

“When stock can be bought below a business’s value, it is probably the best use of cash.”

The bottom line: Buying back BRK/A at a price to book value of 145% and P/E of 28 is clearly not the “best use of cash”, and the market certainly is not valuing BRK/A at “below intrinsic value.” To counter his contradiction, it would be nice if he either came out and said he has changed his opinion about the optimal factors promoting buybacks, or stated that BRK/A does not have reasonable opportunities to grow earnings and returning cash to shareholders is the best option.

In the end, Buffett is unreliable on this topic, and BRK/A does not make a habit of returning cash to shareholders. In the long history of the firm, they have only conducted a few very small share buybacks and only once issued a dividend of $0.10 in 1967. It seems to us he is feeding the buyback frenzy occurring in the market today and will likely avoid meaningful buybacks in BRK/A.

One of the most widely followed equity valuation gauges is what is commonly referred to as the Buffett Indicator. The indicator, Buffett’s self-professed favorite, is the ratio of the total market capitalization to GDP. Currently, as shown below, the indicator stands at 132% and dwarfs all prior experiences except the final throes of the Tech boom in the late 1990’s.

The following section highlighted in orange is from a recent article entitled Would You Rather with Warren Buffett by Eric Cinnamond:

Question to Warren Buffett: “One of the things you look at is the total value of the stock market compared to GDP. If you look at that graph it’s at a high point, the highest it’s been since the tech crash back in the late 90’s. Does that mean we’re overextended? Is it a better time to be fearful rather than greedy?”

Eric Cinnamond (EC): What a great question, I thought. I couldn’t wait for his answer. Let him have it Warren! It’s your favorite valuation metric flashing red – tell everyone how expensive stocks have become! I was very excited to hear his response.  Buffett replied,

EC: But in 1999 when this valuation was actually less than today he said this…

WB: “Let me summarize what I’ve been saying about the stock market: I think it’s very hard to come up with a persuasive case that equities will over the next 17 years perform anything like–anything like–they’ve performed in the past 17. If I had to pick the most probable return, from appreciation and dividends combined, that investors in aggregate–repeat, aggregate–would earn in a world of constant interest rates, 2% inflation, and those ever hurtful frictional costs, it would be 6%. If you strip out the inflation component from this nominal return (which you would need to do however inflation fluctuates), that’s 4% in real terms. And if 4% is wrong, I believe that the percentage is just as likely to be less as more.”

Our take: Stocks are far from cheap. Based on Buffett’s preferred valuation model and historical data, as depicted in the scatter graph below, return expectations for the next ten years are as likely to be negative as they were for the ten-year period following the late ‘90’s. To read more about this graph click on the following link –Allocating on Blind Faith.

The article provides a glimpse of the value added in our new service RIA Pro.

The more compelling question for Mr. Buffett is not whether or not he generally likes stocks but which stocks he likes. As a value investor, he ardently discriminates on price within the context of which companies operate with unique pricing power. This characteristic, more than any other, best defines Buffett’s investment preferences. He routinely speaks about the competitive “moat” that he likes for his companies to have. Understanding what he means by that is important. The following quote captures the essence:

“If you’ve got a good enough business, if you have a monopoly newspaper or if you have a network television station, your idiot nephew could run it.”

Keyword: Monopoly. That is how a company retains pricing power. The empire of the perceived champion of American capitalism and free markets is built on monopolistic companies. Yes, I think we can add that to the list of contradictions.

The following recent quotes are from a CNBC interview of Mr. Buffett on June 7, 2018 about bullish market prospects:

If the economic outlook is so constructive, and you can afford and are willing to hold investments for long periods, why does BRK/A hold so much dry powder as shown below? 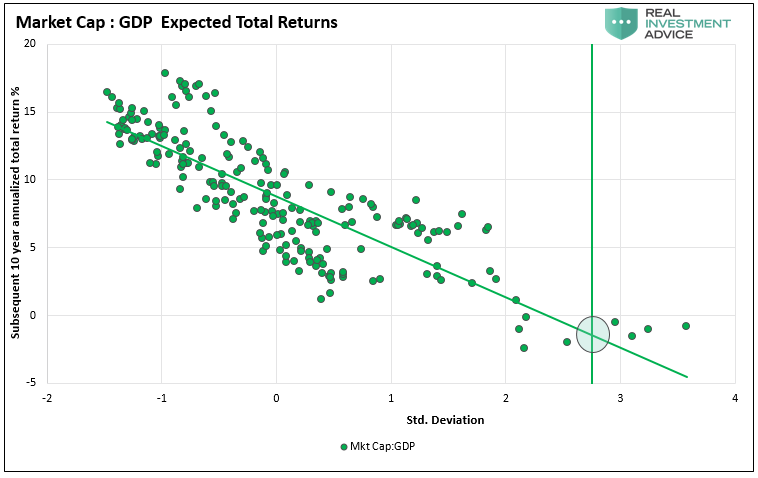 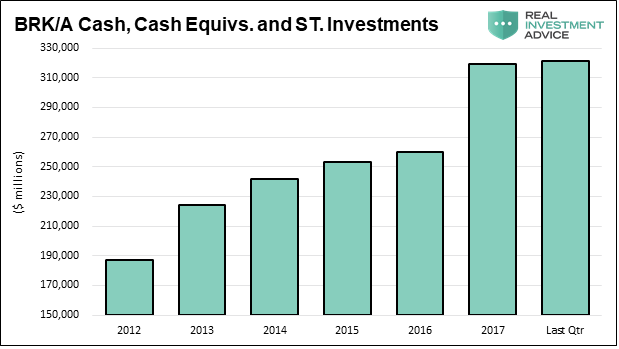 A growing war chest of over $300 billion in cash certainly appears to be inconsistent with his stated outlook.

The general platitudes of market and economic optimism Buffett shares in his CNBC interviews, letters to investors and shareholder meetings often run counter to the actions he has taken in his investment approach. Not only does he seek out companies with monopolistic characteristics and pricing advantages, he seems to be increasingly positioning to protect against imprudent central bank policies that have fueled this bull market.

His purchase of Burlington Northern Santa Fe (BNSF) railroad is an acquisition of hard assets. Control of BNSF affords a multitude of other benefits in the form of rights of way and adjacent mining rights, and it allows him to move other energy resources he has been steadily accumulating as well.

Four of his top ten holdings are financial services companies such as Wells Fargo (WFC), Bank of America (BAC), and American Express (AXP). Additionally, he is also known to hold large offshore assets in Asia and elsewhere which generate non-dollar profits that can be held tax-free.

The common theme behind these holdings, besides the fact that they each have their monopolistic “moat”, is that they serve as a firebreak against an uncontrolled outbreak of inflation. If monetary policy sparked serious inflation, the hard assets he owns would skyrocket in value, and the off-shore holdings in foreign currencies would be well protected. As for the financial institutions, inflation would effectively minimize the costs of their outstanding debt, while their assets rise in value. Further, their net interest margin on new business would likely increase significantly. All of that would leave BRK/A and Buffett in a position of strength, allowing them to easily buy out bankrupt competitors from investors at pennies on the dollar.

Warren Buffett is without question the modern day icon of American investors. He has become a living legend, and the respect he receives is warranted. He has certainly been a remarkable steward of wealth for himself and his clients. Where we are challenged with regard to his approach, is the way in which he shirks his responsibilities as a leader. To our knowledge, he is not being overtly dishonest but he certainly has a way of rationalizing what appears to be obvious contradictions. Because of his global following and the weight given to each word he utters, the fact that his actions often do not match the spirit of his words is troubling.

Reflecting back on the opening quote from John D. Rockefeller, Buffett has ways of making money that we know nothing about, and he seems intent on obscuring his words to make sure we don’t figure it out. Putting that aside, Warren Buffett did not amass his fortune by following the herd but by leading it.

What Is EBITDA And Why Is It Important? Via CSInvesting This is an examination—taking the best of other literature and experts--of one metric: EBITDA but it also is designed to... Read More

Fannie Mae, Freddie Mac Should Stand On Their Own: Richard Bove