As Facts Change, So Do Our Views – ValueWalk Premium 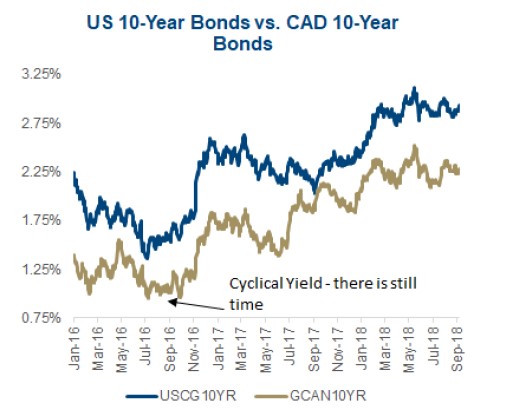 As Facts Change, So Do Our Views

We have been long-time proponents of rising rates, that equity portfolios should be tilted heavily toward cyclical yield and limit exposure to interest rate sensitive companies. Cyclical yield companies are more sensitive to economic activity, meaning if yields are moving higher due to better economic data, they react more positively. In contrast, interest rate sensitives are the opposite, moving higher when yields fall (usually due to softer economic data) and decline in price when yields rise.

Twenty-three months ago we published a Market Ethos titled “Cyclical Yield – there is still time”. At that time, Canadian stocks (particularly cyclically oriented names in the energy and materials sectors) had been hampered following a downturn in commodity prices. Quantitative easing and other novel efforts from central bankers had pushed yields negative in some countries. The interconnectivity of markets was suppressing our own domestic yields, despite improving economic data. Performance chasing investors piled into sectors such as utilities, telecom, REITs and staples, which had outperformed. We highlighted that adding to these sectors was adding risk, particularly if bond yields rose, and evidently they did! (chart 1)

This view led our overarching portfolio positioning of overweighting cyclical yield sectors and underweighting those more sensitive to rising rates (see our continuum of sector rate sensitivity on page 2). Although we were early, our predictions were correct, as yields have been rising for the better part of the past two years. Markets never move in a straight light, but the trend has been higher. As we write, U.S. yields appear poised to challenge the 3% again for the fourth time this year.

The reality is that even the best money managers are only right 60-65 percent of the time. Being pupils in the study of Behavioral Economics as well as money managers, we know we are most susceptible to confirmation bias, anchoring and overconfidence (chart 2). Our views are that bond yields will continue to move higher as inflationary pressures mount, economic data will continue to remain strong and central banks will react by raising rates and move toward quantitative tightening. However, to minimize the effect of our biases on our views, we spend more time looking for reasons that conflict with our views, studying the rationale and questioning our thesis then reading things that seem to confirm our beliefs. 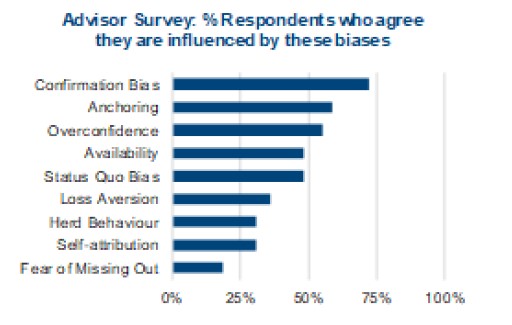 That constant questioning has made us reassess our views, and we are less confident that the next move in bond yields is assertively higher.

The facts have been changing recently: pronounced weakness in emerging markets, commodity prices once again weakening and other leading indicators in our market cycle monitor causing a downward trend in aggregate. With these factors in mind, while we remain tilted towards cyclically oriented names, we have begun to unwind that view on the periphery, (to protect against the 40% of the time we are wrong) and the next move in yields is lower, not higher.

Although our sector positioning has not become markedly different (chart 5), we have lowered our weighting in some of our most cyclical sectors and positions. Below you will find our current thoughts on four cyclical sectors.

Oil markets are back in balance with inventories back to normal levels. This sector should outperform right up to the end of the cycle, so we do not want to back off to hard. But in recent months, the majority of our buying has been in our two favourite pipeline companies: Enbridge and TransCanada. Both are utility-like and actually add interest rate sensitivity to our portfolios. We believe their dividends will continue to grow as new pipes come online (Line 3 / Keystone XL) and are secured by free cash flow generated from owning and operating best in class North American pipelines. Even with our buying, we are still underweight in pipelines which account for nearly 8% of the S&P TSX Composite.

This sector has been bifurcated with industries like forestry and chemicals remaining strong, but other like mining and gold digging themselves into a hole of negative relative performance. Gold has lost its lustre against the backdrop of U.S. dollar strength and the beginning of inflation. However, we have added on the weakness to Franco-Nevada, which we believe as the most defensive of the group.

Miners have been pulled down more by the commodity prices that the pull out of the ground, and this is why we recently reduced our position in Lundin Mining. We also trimmed our position in Nutrien, which had a good run, but is fairly cyclical. We remain overweight in this sector, but focused on industries like Containers & Packing (IP-U, ITPT) which are beneficiaries of the secular rise of online shopping the increase in demand for those brown boxes are increasingly appearing on doorsteps and concierge desks. 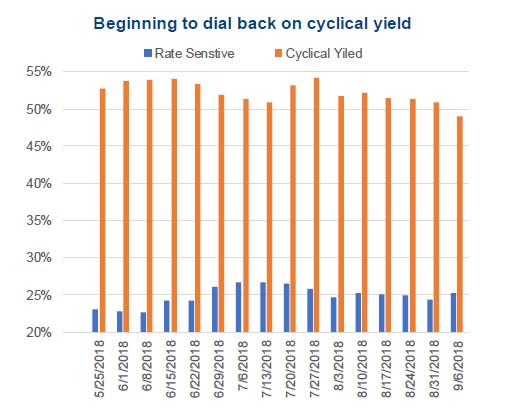 Valuations remain reasonable in both Canada and the States, the Philly Fed and Empire capital expenditure surveys remain strong, which makes sense as sales growth for the S&P 500 has been robust. The problem for this sector is that when a recession hits, that spending dries-up, leaving these companies in a tough position.

We have booked nice profits in names like WSP Global and TFI International, but still remain overweight the sector. Our largest industry overweight is in the machinery subsector where we hold FlowServe and newly added NFI Group, who recently inked a deal with the TTC. Public transportation tends to fair ok during periods of economic weakness. We also have an overweight in aerospace and defence; General Dynamics hedges us somewhat against Trump’s Twitter finger.

We focus on tech names that pay a dividend, but who tend not to be the true high-flying cyclical tech names that grab most of the headlines. So our posturing here is relatively
defensive.

This is one of, or maybe our favourite cyclical yield sector at this point in the cycle. One of our favourite strategies in the recent past is looking for legacy companies that are going from boring tech, reinventing themselves and proliferating their growth profile. Microsoft is a great example of this. They have moved from simply being an operating system and software provider, selling windows and office, to being a market leader in many different businesses ranging from hardware, gaming to cloud computing. We also have a bet on semi-conductors (AVGO) as we think the internet of things will continue to grow rapidly as data collection and aggregation becomes increasingly valuable.

With the overarching view that the next move in bond yields is higher our portfolio positioning remains tilted towards cyclical yield industries in favor of interest rate sensitive areas of the market. However, as we move closer to the end of the cycle, we do not want to be over exposed to this positioning and have begun to slowly unwind the trade. In the coming quarters, it is likely that we continuing moving in this direction.