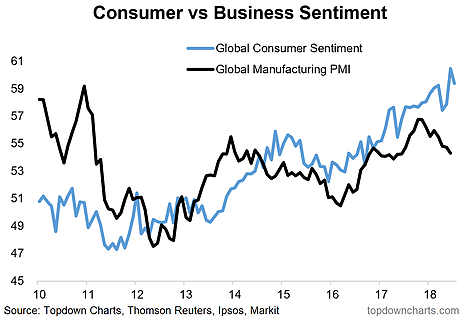 The global GDP weighted consumer sentiment index dipped slightly in September, but stayed within its upward trend, and continued its divergence against the global manufacturing PMI.  That last point is worth highlighting.  Consumer sentiment is often understood to be more of a lagging/coincident indicator and hence the weakness in the PMI may flow through later.  But it does beg the question once more as to whether the softer PMI readings are purely sentiment effects and simply overreaction to news headlines.  If the consumer is right then before long it will be back to business for global risk assets, but if the manufacturer is right then consumer sentiment could simply be the next shoe to drop.

BONUS CHART:  Here's the Thomson Reuters Ipsos consumer sentiment indicators arranged in GDP weighted groups for Emerging vs Developed economies.  Over the past 2 years EM & DM have basically seen a synchronized improvement in consumer sentiment.  With both holding up, it further highlights the point about apparent strength in the global economy vs headline and market volatility driven sentiment effects... 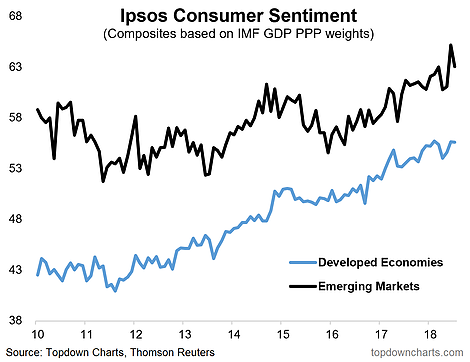 Starbucks Corporation (NASDAQ:SBUX) will open its first Vietnam café in Ho Chi Minh City early next month. The company said on Thursday that it intends to spread its brand... Read More

The Pain Of Patience: How Excessive Short-Term Focus Hurts And Ways To Combat Our Tendencies

This is the final part of a three-part interview with Himanshu H. Shah President and Chief Investment Officer of Shah Capital. The interview is part of ValueWalk’s Value Fund Interview... Read More