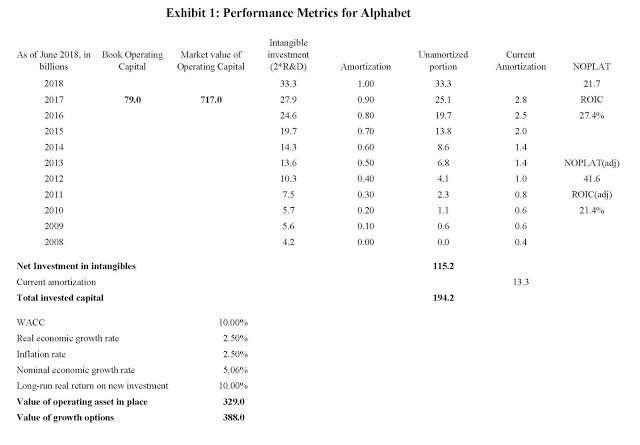 Intangible Capital And Growth Options: The New Source Of Value

The data for Alphabet are presented in Exhibit 1.  The data are not meant to be precise.  The goal here is to explore conceptual issues related to growth options and intangible capital.  As described by Koller, Goedhart, and Wessels (2016) calculating quantities such as net operating profit after adjusted taxes (NOPLAT) and operating invested capital involves careful attention to a host of small details.  Most of those details are not incorporated here so the numbers can be thought of as a first order approximation.  For illustrative purposes, it is assumed that aggregate investment spending on all types of intangible assets is equal to twice the spending on R&D.  This is meant to be on the high side so as to be sure to incorporate the wide variety of intangible assets that Alphabet has generated internally.  The intangible assets are assumed to have a ten-year life and are amortized straight line.

The weighted average cost of capital (WACC) can used as benchmark for assessing the numbers in Exhibit 1.  Although estimates of the WACC depends on the assumptions made and the model employed, most estimates are in a range around 10.0%, so I will use that number.

The are a number of features to note in Exhibit 1.  First, the combination of NOPLAT of $21.7 billion and book operating capital of only $79.0 billion results in a return on invested capital (ROIC) of 27.4%, well in excess of the WACC.[1][1]  Second, when investments in intangibles are capitalized the current intangible capital comes to $115.2 billion, bringing total invested operating capital to $194.2 billion.  That number is still far short of the market value of operating capital of $717 billion.  Third, when both NOPLAT and invested capital are adjusted to take account of intangibles, ROIC(adj) drops to 21.4%.  The adjustment for NOPLAT consists of adding back expenditures on intangibles and deducting amortization of intangibles.  For Alphabet, the impact of adding investment in intangible assets to the denominator outweighs the impact of adding back net investment spending to the numerator.

There are two explanations for the immense difference between the book value of invested capital, including intangibles, and the market value.  The first is that Alphabet’s investments in both tangible and intangible assets are positive net present value (NPV) projects at the start.  If an investment is positive NPV, as soon as the asset is put in place its market value exceeds the invested capital.  This begs the question of where the positive NPV projects come from.  In a competitive market, they would not exist.  The answer must be that they are attributable primarily to the pre-existing intangible capital – something that competing companies cannot replicate.  It is by combining the new investments with the pre-existing intangibles that positive NPV projects are created.  Some may say: what if the company simply scours the markets more carefully and, thereby, finds positive NPV projects?  But the ability to do such scouring is a form of intangible capital.  So once again existing intangibles are the source of the value creation.  Second, over time the market is continually reassessing the value of operating capital assets, including intangibles, based on the cash flows they are expected to produce.  Such reassessments can widen the gap between the amount invested in intangibles and their market values. 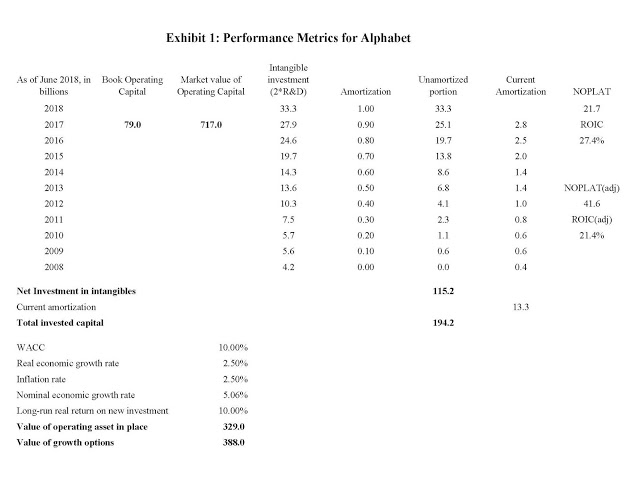 For those of you who would like a PDF copy of the paper, including the references, please visit www.cornell-capital.com.

[1][1] Operating capital is defined net of cash and short-term investments.

Jeremy Grantham An Investment Only A Mother Could Love: The Case For Natural Resource Equities

An Investment Only A Mother Could Love: The Case For Natural Resource Equities by Lucas White & Jeremy Grantham Jeremy Grantham Executive Summary We believe the prices of many commodities... Read More

Backtesting can be a useful to test new strategies, but it should always be approached with a certain degree of caution. Indeed, a strategy backtested and adjusted in such a... Read More