Warren Buffett, one of the most successful investors of all time, knows how to value stocks and markets.

But that doesn’t mean that he’s always right, of course… or that his methodologies are foolproof.

It compares a country’s total stock market value to its total output (its gross domestic product). In this way, it’s similar to a price-to-sales (P/S) ratio, which is a frequently used to value stocks.

Buffett considers a stock market trading below 50 percent of the country’s GDP too low, and undervalued. If it trades between 75 percent and 90 percent of GDP, then the market is fairly valued. But anything above 115 percent is overvalued.

The table below shows where global markets stand today, according to this parameter. If we use Warren Buffett’s metrics as a guide, global equities – at 113 percent market cap-to-GDP – are fairly valued, but just on the edge of overvalued territory. That compares to 86 percent in 2010, and 103 percent in 2000.

Relative to the global market, the stock markets of Russia, China and Germany are cheap, with each having total stock market capitalisations well below 75 percent of their respective GDPs. All three markets were also undervalued (based on this metric) in 2010.

Meanwhile, the U.S. stock market now trades at a market cap-to-GDP of 165 percent. Buffett would is consider that overvalued. And it’s higher than the 147 percent ratio of 2000 – near the height of the dotcom bubble.

Other markets that are now in overvalued territory include the U.K., Japan, Singapore and Hong Kong. 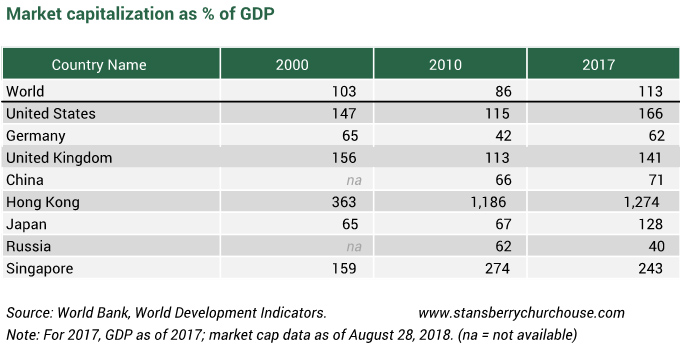 Hong Kong, in particular, sticks out like a sore thumb, with its market capitalisation an eye-popping 1,274 percent of its GDP. And the ratio has nearly quadrupled from 363 percent in 2000, when it was also leading the world. Does this mean Hong Kong’s stock market is alarmingly expensive and that you should be concerned if you have exposure to this market?

No. And that’s why using any stock valuation metric on its own is a bad idea.

Why you shouldn’t be scared

Looking at a country’s market capitalisation-to-GDP is a valuable indicator. It’s just one, though, and it only makes sense in context.

In addition to being one of the most developed financial markets in the world, Hong Kong’s close proximity to China makes it a favourite launching point for hundreds of Chinese companies looking to tap the stock market for capital. Its listing and regulatory requirements (such as corporate governance) are also in some ways less stringent than the U.S., Singapore or the U.K.

Because overseas companies that choose to list their shares in Hong Kong generate most, if not all, of their revenues in other countries (i.e., mainland China), they don’t directly contribute to Hong Kong’s overall GDP. This helps explain why Hong Kong’s stock market cap-to-GDP ratio is so skewed.

Indeed, based on data from the Hong Kong Stock Exchange, the total market capitalisation of so-called Red Chips – Chinese companies incorporated outside China and listed in Hong Kong – amount to US$730 billion, or 228 percent of Hong Kong’s GDP.

And after the listings of mega-IPOs such as electronics company Xiaomi and telecom tower operator China Tower so far this year (we’ve written about these major IPOs here and here), Hong Kong’s stock market is becoming increasingly dominated with China-related stocks… and turning into somewhat of a proxy for China.

And it’s not just Chinese companies.

The CAPE ratio takes into account 10-year historical earnings, and adjusts for inflation, to smoothen out the volatility in earnings that can happen from one year to another. It’s a more accurate representation of a company’s (or in this case, a country’s) ability to generate profits over the long term.

The market capitalisation-to-GDP for Hong Kong will likely continue to rise. That’s because Hong Kong is perfectly positioned to provide international investors an effective access point to one of the fastest growing regions of the world – China.

In April, the Hong Kong Stock Exchange also made it easier for startup biotech companies without revenues or profits to list their shares — a common practice in other developed markets such as the U.S., Europe and Australia.

Moreover, it recently allowed companies with dual-class shares to access the market. Dual class shares are a type of shareholding structure whereby a group of shares carry different rights as others. The most common setup is when the class of shares held by the founders have significantly greater voting right privileges than those held by the public (i.e., ordinary investors).

This type of shareholding structure has become popular with technology companies whose owners want to retain significant voting control after selling shares to the public, similar to the structures of U.S.-listed tech titans Facebook, Alphabet and Alibaba.

In short, Hong Kong’s stock market – despite already being worth nearly 13 times the size of its economy – is not overvalued. More importantly, for investors, this is where many of tomorrow’s next success stories are likely to be found.

Ron Muhlenkamp letter to investors for the Fourth Quarter ended September 30, 2015. H/T Dataroma The domestic quiet we wrote about in June did not last very long. Between August 17... Read More

After five years of consistent double digit returns, Omni Partners Macro Fund ended 2013 down -4.87%, the first time the fund ended in the red in its seven year... Read More

Limiting Losses - The Benefit Of Compounding by 720 Global "Most investors are primarily oriented toward return, how much they can make and pay little attention to risk, how much... Read More