The Knock-On Effects Of A Deleveraging China – ValueWalk Premium 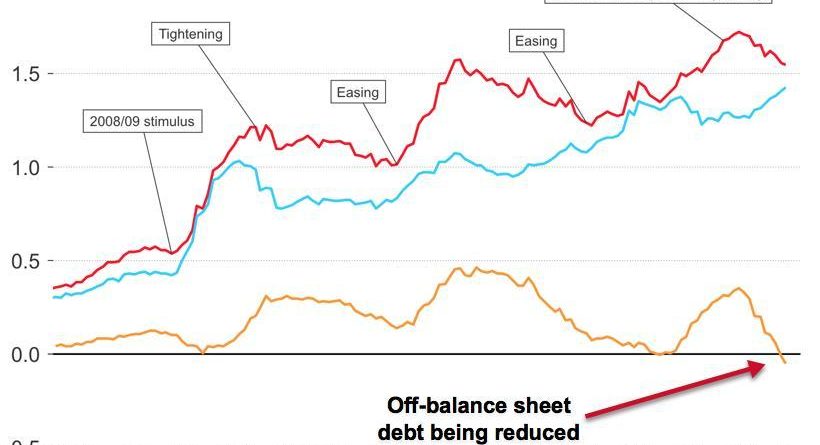 Over the last two decades China has been following the Gerschenkron Growth Model to deliver high levels of extended economic growth.

China is now at this last step.

China has to rebalance its economy. It needs to transition from an investment and export led economy to a consumption based one; retransfer wealth from the vested interests in local government and private businesses back to households. In addition, it needs to deleverage by paying down, writing off, or inflating away its debt stock.

The quickest way to resolve a debt problem like this and rebalance an economy is to go through a financial crisis where assets are sold and debt written down. This is what the US did in the 1930s. But China can’t go this route because this path involves high levels of unemployment that bear socio-political risks, which the CCP can’t afford.

A much more likely scenario (which I believe we’re beginning to see now) is one where the CCP takes a gradual and pragmatic approach.

They assign the debt servicing costs to local governments, who are then forced to sell assets in an orderly manner to pay down debt. And then the CCP goes after debt in the most vulnerable areas of the economy, primarily the off-balance sheet / shadow banking sector and P2P lending, while balancing this with leveraging in the visible areas parts of the economy (ie, local government issuing bonds to boost specific investment). 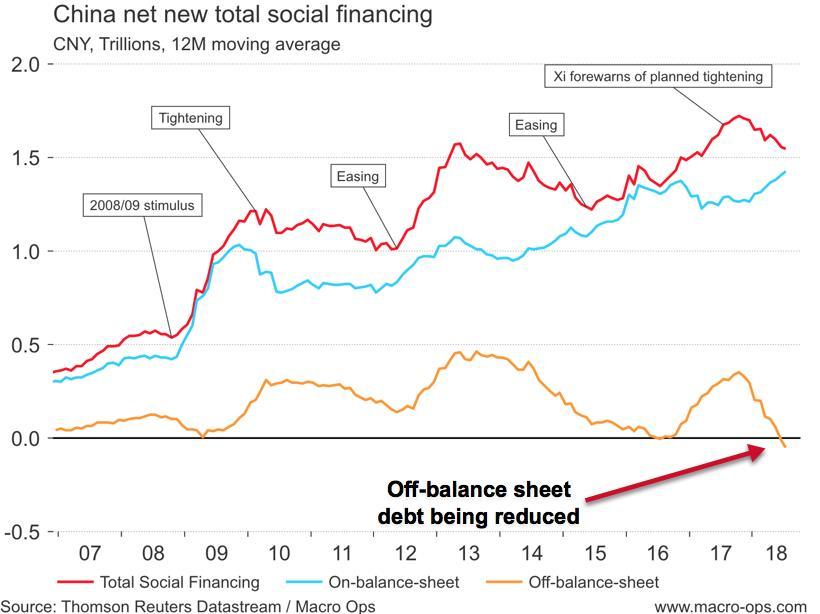 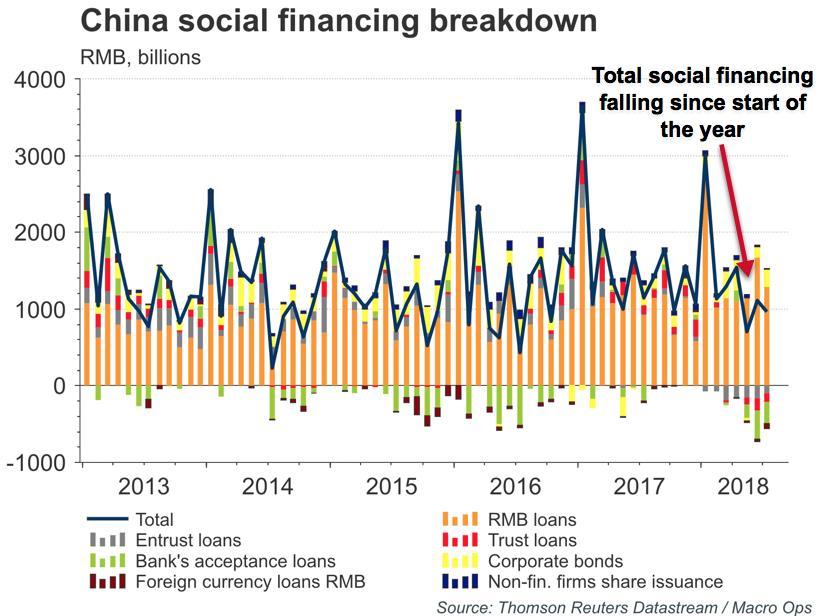 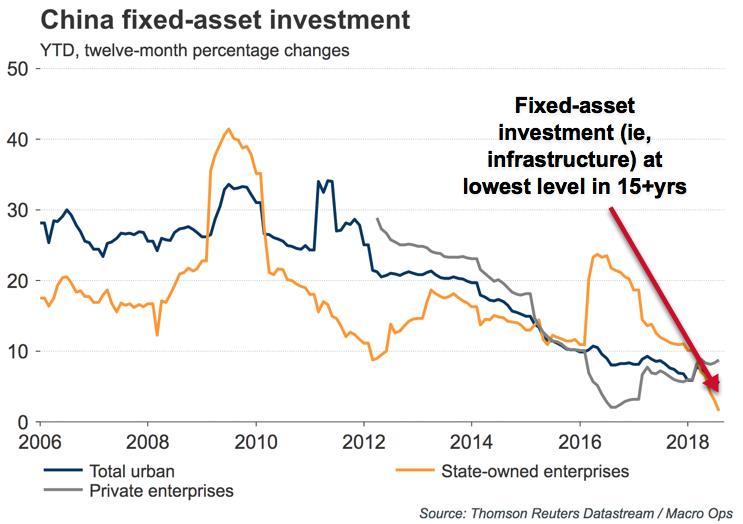 This approach means that we shouldn’t expect a hard landing or financial crisis. It’s likely to look much more like Japan’s lost decade, though China has made it very clear in recent months that they won’t make the same mistake the Japanese did and let their currency strengthen too much. So we should expect the yuan to continue slowly devalue against the dollar.

When I share this China bear thesis with people I almost invariably get the question “Why now? What’s keeping them from kicking the can down the road, again?”

That’s a fair question. Chinese leaders have publicly stated as long ago as 2006 that the country had a serious debt problem and that they’d work to deleverage. Only to obviously do the opposite.

But there’s been a very important change over the last year that makes this time different. And that’s the centralization of power.

Only two types of government have been able to handle and survive a difficult economic and debt rebalancing like this (1) robust democracies with strong institutions (like the US in the 30s) or (2) strong centralized authoritarian regimes (like China in the 80s).

This is what the whole anti-corruption campaign and last year’s 19th Party Congress where Xi became de facto emperor, are all about: Xi consolidating power.

Many people have the misconception that the Chinese government is a well oiled machine, where word is past from on top and carried out at the bottom. But in practice this isn’t the case at all.

The real power and control over debt fueled spending has rested with the vested interests at the local government level; from the provincial on down.

There are two Chinese idioms that relate how things actually work, one is ‘heaven is high and the emperor is far away’ and ‘from above there is policy, but from below there are countermeasures’. Meaning, local government officials are free to do as they please, even if it goes against Beijing’s wishes.

This is why over the last decade we’ve seen leaders in Beijing come out talking about the dire need to rein in the country’s debt but local leaders continuing to borrow, spend, and build.

The vested interests who have become rich and powerful are reluctant to stop the activities that made them so.

The anti-corruption campaign that has punished or jailed over 1.5 million party members since 2012 has been effective in clamping down on dissidence. Xi now has the control and authority to carry out Beijing’s wishes.

The SCMP reported last week that updated party rules “state that failing to implement policies from the top is now officially a breach of discipline that can see cadres lose their jobs or even be expelled from the party. Those who refuse to implement policy directives from the party’s Central Committee, who run their own agenda, or ‘are not resolute enough, cut corners or make accommodations’ in applying them, will be subject to punishment under the new rules, which took effect on August 18.”

That’s why this time IS different…

President Xi clearly stated his intentions in 2016, saying “If we don’t structurally transform the economy and instead just stimulate it to generate short-term growth, then we’re taking our future… If we continue to hesitate and wait, we will not only lose this precious window of opportunity, but we will deplete the resources we’ve built up since the start of the reform era.” He finished by stating that the country had until the end of 2020 to make this transition.

Another common objection I hear is, “they’re not deleveraging, they’re easing!” But this isn’t so. This misunderstanding is partly due to a failure to view the data holistically as well as intentional misdirection by the Chinese in order to manage the market’s response.

A recent paper by the Paulson Institute (the Macro Polo blog) helps clarify the recent words and actions out of Beijing. Here’s some highlights from the report with emphasis by me.

Upon a cursory look, the message from the Politburo meeting seems contradictory, emphasizing both deleveraging and growth. But this can be reconciled by clarifying just exactly what Beijing means by “deleveraging” in the current context.

Top policymakers are well aware that they’ve gotten a lot of flak from businesses and investors, as well as local governments, for tightening policies that have dried up credit. The complaints have grown since the beginning of 2018, so the Politburo meeting’s emphasis on deleveraging is meant to signal that amid grumbling among the masses, the central government is holding the line. In other words, Beijing isn’t going to do what’s popular—opening up the credit spigot again—but rather doing what it deems necessary for China’s economic stability. Indeed, the July Politburo meeting readout notably included Beijing’s renewed vow to uphold deleveraging, which was not included in both the April Politburo meeting readout and the December 2017 Central Economic Work Conference.

Even though the emphasis on deleveraging remains fixed, the central government appears ready to tweak its approach around the edges. Based on the readout of the latest State Council Financial Stability Commission meeting, deleveraging in 2H2018 and beyond will be targeted rather than across the board. At least for the time being, deleveraging has been tweaked to mean “structural deleveraging.”

What this means in the second half is that deleveraging will mostly rely on administrative measures targeted at state-owned enterprises (SOEs) and local governments. Meanwhile, the existing financial measures will remain but will not be further tightened, and monetary policy will become more accommodative and be more in line with inflation trends. In other words, Beijing is simply moving from its triple threat on tightening to just a “double” threat.

A more accommodative monetary policy does not necessarily mean that credit growth will increase. In fact, credit growth will likely remain subdued because of the continued clampdown on shadow banking. Even in the absence of additional regulations, the shadow banking sector will continue to shrink in size under the existing policy environment. If Chinese banks remain reluctant to lend to high-risk borrowers, then the disappearance of shadow banking won’t be offset by increased lending through formal channels.

You can find the report here, it’s worth reading in its entirety.

China is deleveraging and we should expect this deleveraging campaign to gain momentum over the next two years. The current trade war with the US gives the CCP even greater political cover in carrying out painful reforms as it gives them an easy scapegoat to assign blame.

The knock-on effects of a deleveraging China will be numerous and far reaching. The increased market volatility, the bear market in EM, the collapse in gold, and the rise of the dollar are all just the start of things to come. There’s no doubt that it’s long and slow deleveraging will be felt everywhere.

And one thing I find interesting is that this is all starting just as the market’s become blind to the China slowdown threat after fretting about it for years. The chart below via BofAML shows that the China tail risk is hasn’t been front and center on investor’s minds in nearly 4 years. 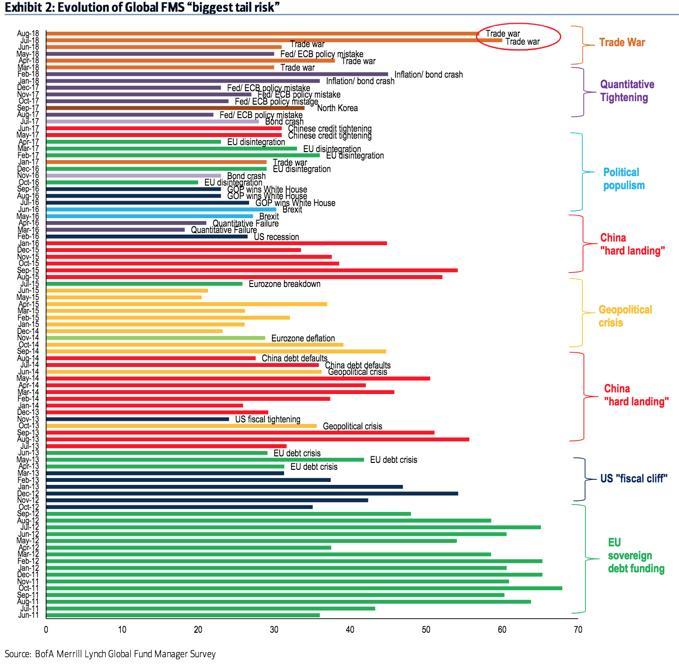 Practically speaking, we should expect EM to continue a slow and grinding descent lower — again, we shouldn’t expect any quick crashes, as global liquidity remains relatively robust. It’s likely that the EEM breakout of last year was just a massive bull trap. Price should continue lower back into its consolidation zone from here. 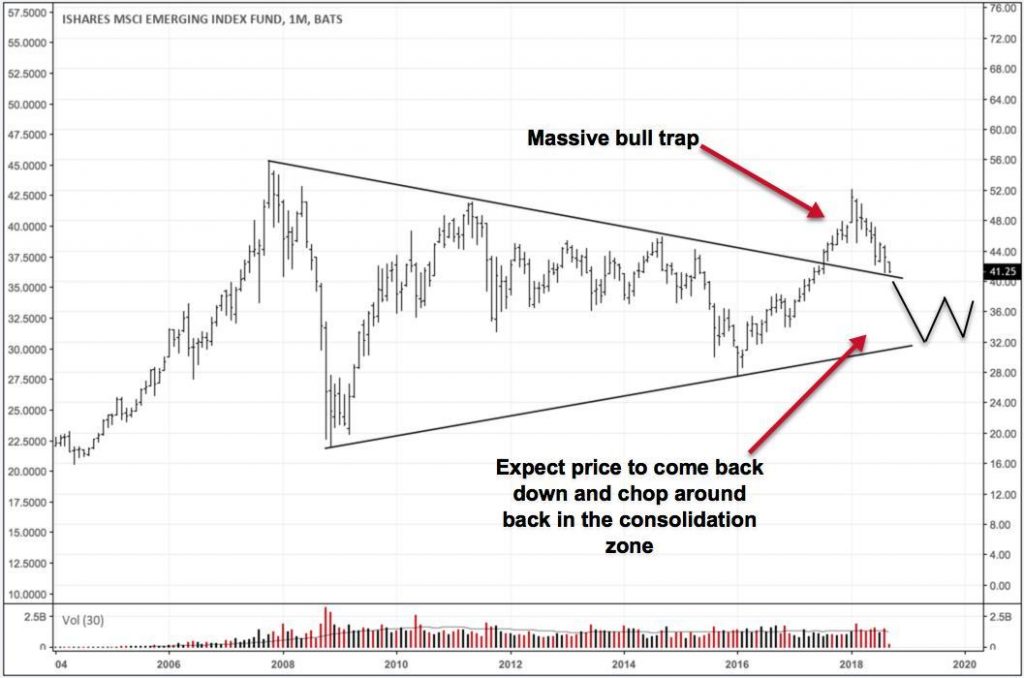 China’s largest trading partners (shown on the chart below via Atradius) are some of the most exposed to a Chinese deleveraging. 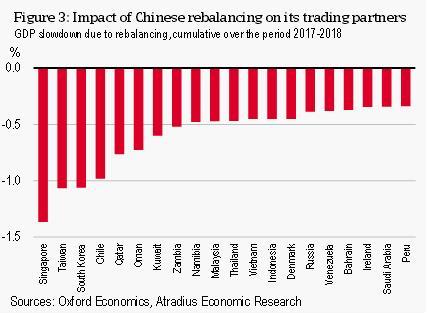 Leon Cooperman, the Chairman and CEO of Omega Advisors remained bullish about the U.S. equity market and optimistic about the country’s economic growth, says Cooperman in a letter to... Read More

The US business software maker, Workday Inc (NYSE:WDAY), has shifted a chunk of its intellectual property to Ireland in a move to cut its tax bill. With a current... Read More

The problems for British-based Quindell PLC (LON:QPP) (OTCMKTS:QUPPF), an IT consultant and outsourcing firm whose revenue models and accounting issues raised concern, continue to multiply. The stock was the top... Read More