Behemoths like Amazon and Uber have transformed industries, putting smaller competitors out of business. Could the same fate await smaller financial planners? Many analysts have predicted massive consolidation in our industry, resulting in a landscape where a few “Goliaths” make it impossible for the small “Davids” to compete. Is this thesis accurate and, if so, what should advisors do to protect themselves?

In 1999, Mark Hurley, an industry consultant and manager of a family of mutual funds, published a white paper that forecast not just the death of the solo practitioner, but the extinction of pretty much every financial services firm except for a small number of Goliaths, whose economies of scale would make them insurmountable competitors. They would be more efficient (and possibly offer planning at lower price-points) than the David-sized firms, have better name-recognition (and therefore more effective marketing), and they would offer in-house expertise that the smaller firms could not afford.

You continue to hear resonances of this message today, in part from Hurley (now president, ironically enough, of Fiduciary Network, LLC, a firm that funds mergers and consolidations, making him hardly an impartial observer in this discussion). Strong echoes have recently come from rollup firms like Fiduciary Network, whose recent white paper suggested that only Goliath firms with much more than $1 billion under management will have the scale to succeed in the future. And Ric Edelman, whose firm aggressively buys up smaller practices, has softened the negotiating stances on the other side of the table by repeatedly telling us, in press interviews, that smaller advisory firms simply cannot prepare adequately for the future. (See here and here).

Despite these predictions, we continue to have a thriving ecosystem of smaller advisory firms, including the XY Planning Network of Millennial advisors. Today, almost half of all RIA firms have less than $100 million in assets under management – 17,688 state-registered firms and 18,225 larger firms registered with the SEC.

But at the same time, bolstering the argument that we are still transitioning to gianthood, the number of firms with more than $1 billion under management – the emerging Goliaths – has grown from essentially zero 10 years ago to – according to the latest Cerulli report – 687 today. Those 687 now hold just over 60% of the total client assets in the industry. So there is clearly growth at the top end. And anecdotally, we can all see a clear trend of smaller firms merging in order to achieve scale and develop a more stable succession plan.

So the question before us is: Was the original prediction correct, just too early in the cycle? Will solo and smaller RIA firms have to merge and grow in order to survive? Do solo advisory firms face an existential threat to their existence and, if so, should they contact Ric Edelman with a firesale price?

Or is something else going on that will create an ecosystem where both the Goliaths and also the Davids can thrive?

That’s the first question. The second question is: We all know there are advantages to having size and scale. But are there comparable advantages that the Davids have over the Goliaths? And if there are, how can the smaller firms use those advantages and thrive despite the woeful predictions about their future?

Let’s tackle the first question. If we try to project the spectrum of firm sizes in the (relatively young) financial planning profession as it matures, then it is reasonable to look at the experiences of more established professions. The legal and accounting professions operate much like planning firms; that is, they provide expertise to their clients in a professional setting, and we all know that they have large and small firms in their respective ecosystems. Over the centuries of their professional existence, have their larger firms driven to extinction the smaller competitors?

Far from it. The table shown here lists the number of law firms in the U.S. marketplace, broken down by size of the firm: 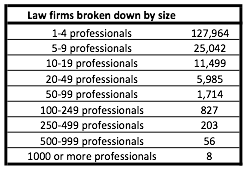