Why You Need Active Management: Every Bear Market Is Different – ValueWalk Premium 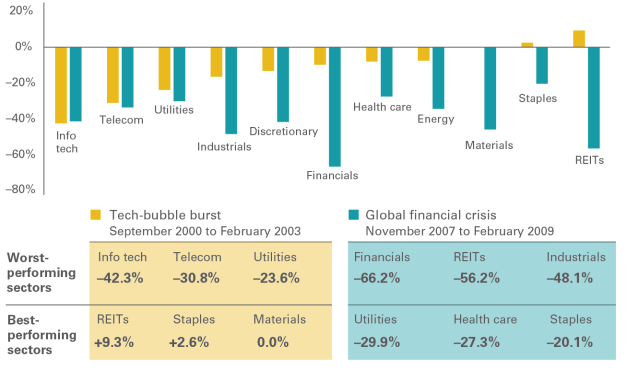 Why You Need Active Management: Every Bear Market Is Different

Years ago, after learning in school that no two fingerprints are alike, my kids spent weeks trying to match their fingerprints to other people to disprove their teacher. Besides the practical aspects of having a limited number of test subjects, they never came close to proving the teacher wrong (although they kept thinking they were right). While fingerprints do have similarities, trying to find two identical ones is near impossible.1

Much like the uniqueness of fingerprints, finding two bear markets that are identical is almost impossible. All bear markets involve market stress, but no two are alike. A variety of factors can cause them, including unexpected changes in monetary policy, political events, overvaluations, bank failures, natural disasters, wars, and deleveraging in various forms and combinations.

Trying to anticipate whether any of these possible catalysts will manifest and how they might affect equity markets has proved to be quite difficult. And it’s no different with professional asset managers, whose performances are also almost impossible to predict, as we’ll see below. However, we believe certain factors can improve the probability of success using active management.

To see how difficult it is to predict investment performance, we looked at the differences in returns of various market sectors and segments during the last two bear markets.

Notes: Calculations are based on the annualized returns over the relevant time periods for the various sectors. The returns of the REIT sector were calculated from monthly Dow Jones U.S. Select REIT Index returns. All other sectors calculated from monthly Standard & Poor’s 500 Index sector returns. Past performance is no guarantee of future returns. The performance of an index is not an exact representation of any particular investment, as you cannot invest directly in an index. 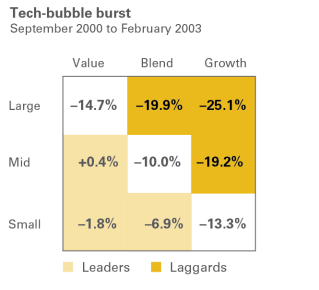 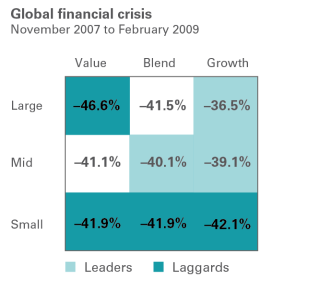 Notes: Calculations are based on the annualized returns over the relevant time periods for the segments of the market using relevant S&P index returns. Past performance is no guarantee of future returns. The performance of an index is not an exact representation of any particular investment, as you cannot invest directly in an index.

Active managers, as I noted above, didn’t escape this unpredictability either. The top-performing active managers after the tech-bubble burst were no more likely to stay in the top half during the global financial crisis than end up in the bottom half, or be liquidated or merged.

We found this by taking all surviving funds after the dot-com implosion and bucketing them by performance quartiles. We then looked at how the top-performing quartile of funds performed during the subsequent bear market.2

By comparison, random outcomes would show that each quartile category collected a quarter of the observations. Without even assuming that a majority of the liquidated/merged funds would have been in the bottom quartiles, it’s clear that a given manager’s success in one bear market did not guarantee success in the next.

Read the full article her by Chris Tidmore of Vanguard, Advisor Perspectives

[From The Archives] Jim Chanos: Smarter Than The Average Bear

Jim Chanos: Smarter Than The Average Bear from VII 2005 interview The press calls are few and far between these days for Jim Chanos, managing partner of Kynikos Associates and... Read More

No, you should not "sell in May and go away"

“Sell in May (and buy back in November) has 'worked', but the hit rate is often poor: The return for most risk assets between May and October has been... Read More

The Ideal Environment For Overnight Gap Risk Q1 hedge fund letters, conference, scoops etc The US equity market is back to all-time highs. Or, has it really gone nowhere for... Read More