IBM To Acquire Red Hat For $34 Billion: Is IBM A Buy? – ValueWalk Premium

IBM is an information technology company which provides integrated solutions that leverage information technology and knowledge of business processes. The company was founded in 1911. On 10/16/18 IBM reported third-quarter earnings results. Revenue of $18.68 billion declined 2% year-over-year, but was flat in constant currency. Revenue missed analyst estimates by $330 million. Adjusted earnings-per-share of $3.42 beat analyst expectations by $0.02 per share, and increased 5.0% from the same quarter a year ago.

On 10/29/18 IBM announced it will acquire Red Hat, Inc. for $190 per share, representing a total enterprise value of $34 billion. This is the largest deal in IBM’s history, and is among the largest deals ever in the technology sector. Red Hat operates in the open-source software market and primarily distributes technology products used in data centers. It generates annual revenue of nearly $3 billion. It will boost IBM’s cloud platform, which is one of its most important strategic growth areas. IBM states that the acquisition will be accretive to earnings within 12 months of closing.

Growth on a Per-Share Basis

IBM’s turnaround will receive a boost from the Red Hat acquisition. As shown in the above table, IBM’s earnings growth plateaued in 2014, with a steady decline since. The Red Hat acquisition will significantly restore IBM’s growth as it gives the company further expansion into key strategic initiatives such as the cloud, open source, and analytics. IBM has had to play catch up to other tech giants like Microsoft and Amazon, which have a lead in cloud infrastructure.

Collectively, IBM refers to its group of growth initiatives as the “strategic imperatives”, which continue to perform well. In the past 12 months, total strategic revenue increased 11% to $39.5 billion. Total cloud revenue increased 20% to $19 billion in the past four reported quarters. As the strategic imperatives become a larger part of the overall organization, IBM should return to earnings growth in the years ahead. One risk of the Red Hat deal is that IBM will suspend its share repurchases, which is a negative for earnings growth. It will also incur Red Hat’s debt. Overall, we are increasing our outlook to 4% annual earnings growth through 2023.

IBM expects to generate earnings-per-share of $13.80 in 2018. Based on this, stock trades for a price-to-earnings ratio of 8.8. This is below the historical valuation of the stock. Over the past 10 years, IBM traded for an average price-to-earnings ratio of 12.3, which is a reasonable estimate of fair value. IBM is still having difficulty turning itself around, but the company remains highly profitable and has a strong brand. A rising valuation could add 6.9% to IBM’s annual shareholder returns over the next five years.
Safety, Quality, Competitive Advantage, & Recession Resiliency

IBM has a strong balance sheet, which allowed the company to use cash to acquire Red Hat. The company also has a dividend payout ratio below 50%, which indicates sufficient dividend coverage. IBM has led the world in U.S. patents earned for 25 years in a row. Last year it set a new record with over 9,000 patents, nearly half of which are in strategic areas such as artificial intelligence, cloud technology, blockchain, and other emerging technologies. IBM is also a surprisingly recession-resistant company. IBM grew earnings-per-share in 2008 and 2009, during the Great Recession.

Investors have likely been disappointed with IBM’s performance over the past few years. While the turnaround has taken longer than many investors would prefer, it is not easy to turn around a company as large as IBM. The Red Hat acquisition is a potential game-changer for IBM, as the company needs to accelerate its cloud growth. In all, we expect annual returns of 16.1% over the next five years, which makes IBM stock a buy. 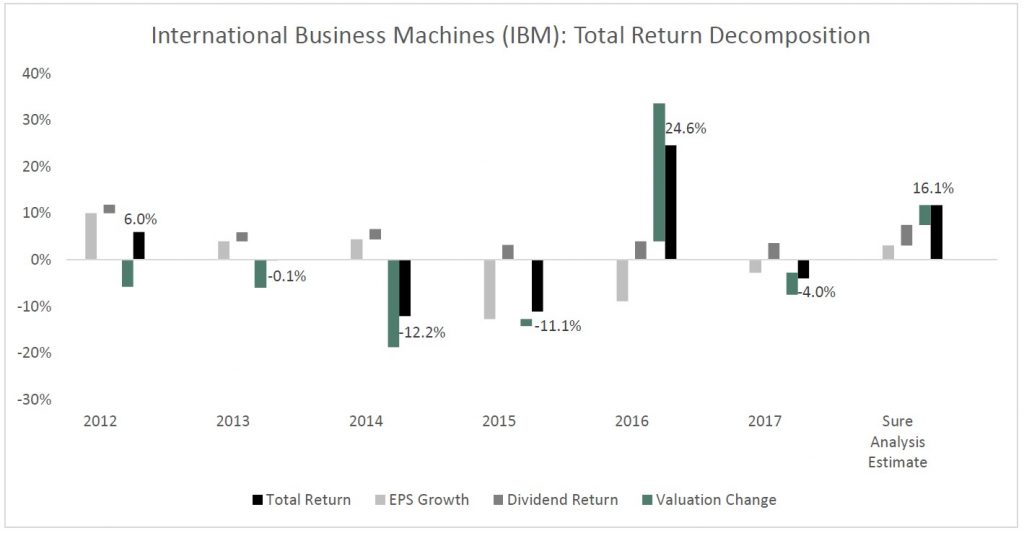 Article by Bob Ciura, Sure Dividend

After failing to deliver on its promise to divest itself of ownership of ammunition maker Freedom Group, Cerberus Capital Management is now offering another option to its investors. The... Read More

Canyon Capital Not Happy With Ambac - and so it continues see the full letter below. Canyon Capital Discloses Significant Concerns, Including from Current and Former Ambac Employees, Regarding the... Read More